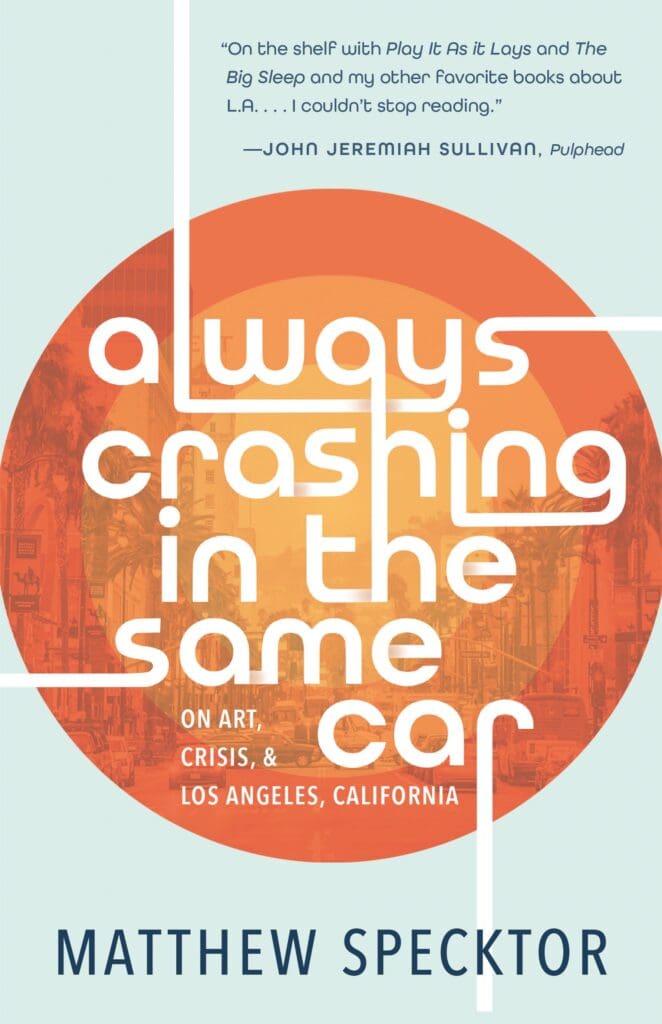 As the Beat poet Lew Welch pithily put it, “More people know you than you know. Fame.” Welch was someone who knew whereof he spoke. He disappeared from his friend Gary Snyder’s house into a nearby mountain range in May 1971, leaving behind a cryptic farewell note that read, in part: “I had great visions but could never bring them together with reality. I used it all up. It’s gone.’’ Matthew Specktor explores the pulls—and perils—of chasing success in Always Crashing in the Same Car: On Art, Crisis, and Los Angeles, California (300 pages; Tin House), an eloquent account of […]

Northern California is once again faced with wildfires. We encourage you to explore this link from the Northern California Grantmakers on ways you can help the many people displaced by the fires. NCG provides a number of options, including vetted wildfire relief and recovery funds such as the Center for Disaster Philanthropy and the Solano Disaster Relief Fund. Please feel free to share links to similar relief efforts in the Comments below. […]

In Los Angeles, there exists a rarified social echelon known as the Street People. These are not, as their moniker might suggest, the many who find themselves without shelter (much like San Francisco, L.A. is currently dealing with a staggering increase in its homeless population). Rather, the name refers to the wealthy landowners and developers who saw prominent streets named after them: the Crenshaws, the Chandlers, the Van Nuys. The descendants of these 20th century tycoons move in a world of power and privilege, the kind that isn’t even whispered about in the society pages. It is into this hermetically […]

“Obsessions” is our web-only essay series that asks emerging West Coast writers to examine the books, poems, songs, television shows, images, or whatever else that has been dominating their attentions lately. We begin with “Liked to Date: 2,836 Posts,” a piece from Shokoofeh Rajabzadeh, a Ph.D. candidate in English Language & Literature at the University of California at Berkeley. Rajabzadeh’s poetry has appeared in Poetry Northwest and Modern Poetry in Translation, and she is currently working on a series of essays about immigrating to the United States and growing up Muslim, post-9/11. She’s closed her Instagram account again. I’ve checked three times […]

When I moved to California last year, water was far from my mind. Naturally, upon my arrival I was shocked by the severity of the drought, the messy status of water rights, and the endless bickering over an element that I considered a common occurrence, as well as a natural right. For Californians, however, these environmental threats are nothing new. Beyond the political scope, environmental issues, at their core, reveal the moral grappling of humankind, and yet a surprisingly few number of authors take on the subject.

In light of the current drought, John van der Zee’s “Grassfire,” which appeared thirty years ago in the first issue of ZYZZYVA, remains morally pertinent. The story, detailing a man’s struggle to put out a small wildfire, illuminates the essential crux of California’s environmental issues, which, thirty years later, are just as controversial. A wildfire presents a moral dilemma; though, with its rapid and unpredictable expansion, it ultimately contradicts the old adage that what is one person’s problem is not another’s. “Grassland” begins with gallantry before crumbling again into conflict.

Van der Zee’s prose is evocative and succinct. The wildfire is just as animated as the characters, animal-like, morphing into the irrepressible fears of our protagonist, inserting itself into the politically divided landscape. And though fire poses the greatest immediate peril in this story, the threat of drought looms ominously at its side. The descriptions of the burnt landscape and dry faucets, when read today, resemble the unheeded forewarnings of a prophet. — Sarah Cooolidge

Lewis Buzbee uses his experiences in education—as student and professor—as the backbone for his newest book, Blackboard: A Personal History of the Classroom (Graywolf Press), which formulates a critique of the current state of the California public school system. The book is divided into two sections: “Orientation” and “Matriculation,” the first presenting us with the “simple” years—kindergarten to sixth grade—and the second focusing on seventh grade and beyond. Though each chapter is built upon Buzbee’s own experiences in each grade, the histories of the school system in the U.S.—such as the beginnings of kindergarten in 1837—as well as the histories […]

It can be argued that the post-apocalyptic science fiction novel was invented in California. Although there had been such end-of-days precursors as Mary Shelley’s The Last Man or E.M. Forster’s story “The Machine Stops” (and even the novel The Scarlet Plague by Oakland’s own Jack London), it was Earth Abides, published in 1949 by University of California English professor George R. Stewart, that established many of the tropes associated with doomsday novels, ranging from Stephen King’s The Stand to The Road by Cormac McCarthy. Stewart’s novel follows geography grad student Isherwood “Ish” Williams after he recovers from a snakebite-induced coma in the […]

“The pure products of America go crazy,’’ William Carlos Williams memorably wrote, and from Aurora to the weird kid lounging at the register of the local 7-Eleven, we see the proof of his perception all around us. In ‘70s Southern California, Kelly Daniels grew up amid such strangeness as the son of a drug-dealing, surfer-bum dad (who was ultimately convicted of killing a drug-dealing cousin) and a well-intentioned and loving mom, who signed up with a cult called the Church of the Living. Although he found temporary refuge with his wealthy grandparents, Daniels grew up, understandably, confused and angry. With […]

I See Beauty In This Life, photographer Lisa M. Hamilton’s exhibition of her own work as well as images she pulled from the California Historical Society’s vast archives, attempts something seemingly impossible: in Hamilton’s words, to “cover a history dating from 2012 all the way back to a time when California was essentially nothing but rural” in about 150 pictures. This presents a gargantuan curatorial challenge. How do you address California’s geographical vastness, the scope of its industries, and the numerous complexities of its rural labor history? “Rural” is different than “empty,” and the exhibition’s images nearly all emphasize the […]

The people of Lysley Tenorio’s story collection, Monstress (Ecco), are straddlers. Most obviously, they straddle cultures. Filipino immigrants in America pine for their native land or wish, often hopelessly, to assimilate indistinguishably into the culture of their adopted home. Life in the Philippines seems just as conflicted; the West’s exported culture muscles out the endeavors of Filipinos, with the Beatles and Hollywood dominating the collective imagination there just as much as they do here. But Tenorio’s characters also seem to straddle the high and low. He imbues them with profound (but never cheaply sentimental) longings, and with refinement of feeling […]

David Rains Wallace was born in Charlottesville, Virginia, in 1945 and grew up in New England. He attended Wesleyan University in Middletown, Conn. (B.A. 1967) and Mills College in Oakland (M.A. 1974). His first published writing on natural history and conservation appeared in Clear Creek Magazine in 1970. Since then he has published seventeen books, and his work has appeared in many anthologies and periodicals, including The Norton Anthology of Nature Writing, The New York Times, The Los Angeles Times, Harpers, Mother Jones, Greenpeace, Sierra, Wilderness, Country Journal, and Backpacker. Wallace received the 1984 John Burroughs Medal for Nature Writing […]