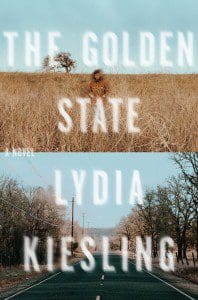 Essayist and critic Lydia Kiesling’s first novel, The Golden State (304 pages; MCD), already long listed for the Center for Fiction’s First Novel Prize, is an enrapturing torrent of a narrative, exploring the daunting beginning of motherhood and the complications of marrying a foreign national. New mother Daphne must balance caring of her sixteen-month-old daughter, Honey, with handling the stress of getting her Turkish husband, Engin, back into the U.S., all while dealing with her job at the Al-Ihsan Foundation in San Francisco. These circumstances send her on a ten-day epic roadtrip, beginning with a drive to Daphne’s late mother’s hometown, Altavista: “The beauty here is the great slate sky The sound of the birds in the morning the color of the hills and the fields at dusk.”

Daphne’s acerbic and slightly self-loathing wit is lined with absurd humor and Kiesling’s clever syntax: her lack of punctuation allows us to further inhabit the heart of Daphne’s disquiet.

The Golden State is a trenchantly-written take on both the female and immigrant experience, making the somber read as captivating. Kiesling recently spoke to ZYZZYVA about the origins of the novel, her protagonist Daphne, immigration in America, and more.

ZYZZYVA: You started your career writing essays and criticism, and are now the editor of The Millions. Have you always wanted to write a novel?

Lydia Kiesling: I’ve been writing essays and criticism for a long time; all along I secretly wanted to write a novel. That’s not something I wanted to admit to myself until a


couple of years ago, but every time I tried a new form of writing, that was the direction I was moving toward. I also enjoy reading narrative non-fiction, and I think people really enjoy writers who can do that well. But fiction was always what I was working toward.

Z: There were so many aspects of your protagonist Daphne that resonated with me: she’s Type-A, but also a bit of clueless and naive. The honesty of her character really drew me in. Where did Daphne come from?

LK: Well, it’s funny because I’ve seen two reactions to the book. People sort of go in two camps: ones who can relate to her as a character and as a person, and ones who don’t relate to her at all; so that influences their experiences, and those who can’t relate to her kind of treat the novel like a horror story. I think Daphne is a little bit over the top, but I would be lying if said she wasn’t somewhat of a relatable character.

Z: Stylistically, I noticed there weren’t a lot of commas in Daphne’s speaking lines, which makes it seem as though she is talking on and on (and on), adding to her neurotic quality.

LK: I took someone who is very similar to me and put her in more difficult circumstances to see how she would respond. One of the things I thought about all the time when I had a baby (my oldest one) was how much I longed to be alone with her; I was a bit traumatized because I went back to work in an office setting when she was about ten weeks old. I was surprised to find it demoralizing. On the one hand, I had this fantasy of going somewhere with her, and yet when I was alone with her I realized it was miserable. It really taxes your mind and body in a different way. I was trying to think of a person like me who got what I wished for, in a sense, but under the worst conditions and what that would be like.

Z: Another thing I resonated with me was Engin’s Green Card-related distress. As a foreigner myself, I’ve spent hours researching this. All the details of the situation’s complexities were so spot on! Have you experienced this firsthand?

LK: I have friends who were not in identical circumstances but in pretty similar ones, so I started looking into it. I think people look at the book now and see what it’s about and think it’s very timely because of Donald Trump. But in all reality, the immigration system has been messed up for a long time. What struck me about my friend’s situation was that it was extremely arbitrary. All you have to do is meet the wrong border guard and they can decide they’re interpreting something in a different way, or they don’t like how you’re fulfilling some byzantine and arcane requirement, and then they can detain you indefinitely and you have no recourse in that moment. As we’ve seen, it’s happening now and that gives way for a lot of abuses. It involves guards being wrong and choosing an interpretation of a policy that suits them, but also there’s some ineptitude: paperwork being lost, things not moving forward and having no visibility on why that is –– it’s such a maddening system.

And when you read through these websites, you understand why it costs so much to hire a professional to navigate it for you. There’s one line that makes me laugh in relation to overseas consular processing: “if you’re case is approved, you will receive a packet. Do not open this packet.” You’re supposed to bring it to the consulate and open it under a specific circumstance, which I think is absurd. I wanted to put a little of that frustration in the book. I’m sorry you can relate to that!

Z: Northern California’s landscapes really came alive in your prose. Can you tell me about your chosen setting of Pauite County?

LK: Pauite County is fictional, it’s a mishmash of several counties in the North State. Anyone from Modoc County will see the resemblance. My mom is from a town called Alturas, which is where Altavista was fictionalized from. The only reason why I decided to do this amalgam of counties was that I wanted to have the political happenings, and I felt like if I called it Modoc County I’d have to replicate the exact board of supervisors and their meetings. I wanted to give myself a little bit of room. It’s a very rural area; the counties that have now theoretically signed on to create a 51st state, the State of Jefferson, are about 1/3 of California’s land mass but 5% of the population. It’s a large landmass but sparse population, and the town my mom grew up in is decreasing in population.

Z: What made you decide on Turkey as the country where Engin is from?

LK: I went back and forth on the decision, but I lived in Turkey for a year and studied Turkish there and later in grad school, so that choice made the most sense. Paradoxically, since I had more knowledge and information about Turkey, I was scared to misrepresent it. Initially, I thought the husband could be from Denmark, which I then thought was very offensive to Denmark since I’ve only been there one day in my life and I would have to figure out the rest. Fortunately, I realized it was a bad idea and that I was just trying to evade my anxieties. I love Turkey and the Turkish language, so that’s definitely a theme. It definitely provides an interesting contrast, to have a spouse living in one of the world’s’ megacities with a population of 20 million versus the sparsely-populated Northern California.