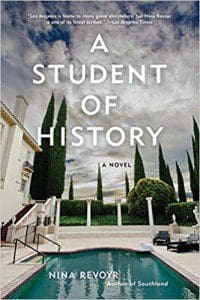 In Los Angeles, there exists a rarified social echelon known as the Street People. These are not, as their moniker might suggest, the many who find themselves without shelter (much like San Francisco, L.A. is currently dealing with a staggering increase in its homeless population). Rather, the name refers to the wealthy landowners and developers who saw prominent streets named after them: the Crenshaws, the Chandlers, the Van Nuys. The descendants of these 20th century tycoons move in a world of power and privilege, the kind that isn’t even whispered about in the society pages. It is into this hermetically sealed environment that the protagonist of Nina Revoyr’s latest novel, A Student of History (238 pages; Akashic Books), finds himself thrust after he takes the job of transcribing the diaries of one of Los Angeles’ most wealthy heiresses.

In his early thirties, Richard Nagano is a graduate student at USC, still reeling from a recent breakup and struggling to make ends meet. At first, he looks at the gig working for Marion W– (the book censors her last name as though to protect the family’s privacy and prevent litigation) as merely a way to supplement his meager income. But as the elderly Marion takes a shine to Richard, going so far as to update his wardrobe with far more stylish (and expensive) attire, and employ him as her escort to various social clubs and galas, Richard realizes the shrewd older woman might be his entry into the upper class. What’s more, he begins to suspect her youthful diaries contain the kind of compelling historical gossip that could revamp his currently stalled graduate thesis.

Both of Richard’s motivations dovetail when he becomes infatuated with Fiona, a well-to-do socialite who quickly develops an interest in Richard, despite the ring on her finger. At her urging, he continues to investigate the tragic secrets hidden in Marion’s past, secrets that once uncovered could potentially put Richard’s good standing with his employer at risk.


With her past novels carrying titles such as Lost Canyon and Southland, it’s clear Southern California has long represented a preoccupation for Revoyr. Her style is both elegant and pleasurable to read; she juggles geographical detail, context, and plotting with a deceptive ease. Revoyr’s L.A. is a city teeming with contradictions, one where the world of everyday concerns and that of the elite class co-exist but rarely intersect until, that is, a random stroke of luck or fate sees a person travel from one world to the next. But even as Richard rubs elbows with the city’s rich and powerful, there remains something to remind him of his origins: his mixed heritage means Marion’s largely white social circles tend to exoticize his good looks; and while Marion may invest in Richard’s clothing, she’s not about to buy him a new car. And so, Richard must head from one soiree to the next in his broken down Honda, the shocked looks of the valet parking attendants a constant echo of his working-class roots.

At the heart of A Student of History, and what prevents the novel from merely serving as a takedown of the scandalous ultra-rich, is Revoyr’s complex characterization of Marion W–. At times, Marion doesn’t seem to have a good word to say about any of her peers; she frequently speaks out of both sides of her mouth, and doesn’t exactly tow the line of political correctness. Yet she is kind to those who work for her, she is fiercely protective of her family, and she absolutely dotes on Richard. While Richard serves as the audience identification character and our entry point into an unfamiliar domain, it’s Marion who proves the most memorable in the drama that unfolds. Her contradictions are exemplified by the fact that she donates generous sums of money to charitable causes, yet does so anonymously, in large part to upstage and frustrate other donors:

“You gave that money?”
“Why, yes. Several years ago. No one there has any idea. They all think I’m a stingy old bitch.”
I let this news sink in. Of course she had given it. That was the reason she’d wanted to attend. “But…why would you do that? Why wouldn’t you want people to know?”
“I have no use for all this fuss,” she said. “People groveling and then wanting more. It’s better they think that you won’t given them anything.”

When Marion ultimately comes to feel as though Richard has betrayed her trust, it registers as a betrayal for the reader as well, even though Richard has far more to lose than Marion with his expulsion from the Hollywood high life. Through their time together, Richard reaches some understanding of Marion’s contradictory nature:

She was a misanthrope who gave generously to causes she claimed to despise; an aesthete who welcomed people who didn’t share her sensibilities; a professed hater of the social niceties that she performed with such grace.

In many ways, A Student of History adopts the familiar structure of the bildungsroman; like other classic novels before it, such as Sentimental Education and Great Expectations, we witness an earnest young man enter a hitherto unexplored sphere of luxury and privilege. Indeed, part of the pleasure of reading the novel is inhabiting that familiar structure, knowing all the while Richard will likely end his term among high society with a sense that perhaps he has lost more than he has gained. Yet by placing the novel in so specific a milieu—Los Angeles in 2019, an era where Americans are feeling the class divide more than ever—Revoyr forges a work that stands on its own. If the book’s ambitions prove modest, it feels entirely appropriate, considering Richard’s ultimate discovery that sometimes a modest life lived well––far from society luncheons and award ceremonies––is good enough.