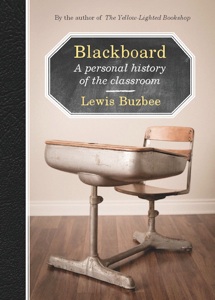 Lewis Buzbee uses his experiences in education—as student and professor—as the backbone for his newest book, Blackboard: A Personal History of the Classroom (Graywolf Press), which formulates a critique of the current state of the California public school system.

The book is divided into two sections: “Orientation” and “Matriculation,” the first presenting us with the “simple” years—kindergarten to sixth grade—and the second focusing on seventh grade and beyond. Though each chapter is built upon Buzbee’s own experiences in each grade, the histories of the school system in the U.S.—such as the beginnings of kindergarten in 1837—as well as the histories of the schools the author attended are laced throughout, making Blackboard more than just a recounting of Buzbee’s school days and instead serving as a lesson on how school here came to be. For example, he breaks down methods of teaching, examining why students in kindergarten are free of desks and can sit crisscross in classes of open space and “play sections,” but by the next year they are tamed and situated neatly rows of desks in rooms with math and science areas instead of ones for playing house and rowboat.


While the chapters in “Orientation” almost follow a year-by-year breakdown “Matriculation” guides us through Buzbee’s schooling from ages twelve or thirteen to now, showing how the author almost slipped between the cracks of the educational system. “Matriculation” is an ode to the work teachers and mentors (one of his biggest life lessons came from a guy named Sharkey who taught him how to play bass) do everyday, both inside and outside the classroom, and the lengths to which these adults go to help a student.

More than once in his book, Buzbee declares that the California school system has deteriorated and needs revival. In the years he attended K-12, the California public school system was ranked the top in the country. Today, it falls at the bottom of the list. The reason, Buzbee writes, is budget cuts. The state, he suggests, is trying to minimize input (dollars, number of schools, etc.) and still expecting the same maximum output (student work, student success, teacher work and commitment), and is ultimately failing to help our children and students.

Not all the schools are academically poor, as he recognizes when his daughter is accepted into many charter prep schools. However, because of the physical state of the school, the massive student-to-teacher ratio, and the minimal (or lack of) extracurricular activities, he believes the overall situation to be unsuitable, impoverishing, and, most importantly, incapable of creating well-rounded students who want to learn as opposed to students who’re forced to learn.  Buzbee ends Blackboard with his own “Immodest Proposal” about what he believes should be done to better the public system, among his suggestions are  doubling or tripling teachers’ salaries, halving the size of every classroom in the country, and revamping classrooms to have materials for not just math, reading, and science, but also for the arts, music, and large open fields for outdoor activities.   These may seem over the top and financially ridiculous, but the idea is if the people, state, and governments aren’t willing to invest more into the school system, well… as the saying goes, you get what you put in.