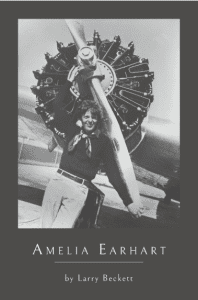 Polymath poet Larry Beckett is flying high in Amelia Earhart (72 pages; Finishing Line Press), his latest addition to a cycle of epic tributes to the likes of P.T. Barnum, Paul Bunyan, and now Earhart, and with an upcoming volume on Wyatt Earp to round off a rubric on the “American Cycle.’’

The Portland writer is still best known for his collaborations with the late Tim Buckley, including the oft-covered classic “Song to the Siren,’’ but the long-ago death of his boyhood friend has not stopped him from cultivating his muse with fresh imaginings of seemingly unlikely subjects.

Oh, listen, the blue flight had no landing,
the worlds are out of balance, and because
the airplane vanished, I, never arriving,
now haunt the raw newspaper, and in words
I hate. Do you read me?


We do. “Amelia Earhart is a novel in verse, in 58 pages,’’ Beckett explains, via email. “It’s a contemporary version of the complaint form, from Renaissance England, as in Samuel Daniel’s The Complaint of Rosamond, and William Shakespeare’s Lucrece, in which the ghost of a woman appears and tells the story of her fall. The convention was the rhyme royal stanza, ababbcc: in my poem, the ghost condemns false approaches to her life in 7-line blank verse stanzas, and the inconclusive music of slant rhyme starts when she counters with the real story.”

Earhart, “whose fall was literal, out of the skies,” he continues, “haunts the newspaper, as from year to year disappearance theories are laid out. In the poem, the ghost is in a rage because all the attention is on her death, and not her life. She thought that our culture’s making such a big deal out of the death of a flyer when it was a woman was a sign of its all-pervading unfairness to women.’’

“The poem is a broadcast on the frequency of her last transmission: the Radio Hong Kong news is interrupted by the ghost. In the extended prologue, she recounts and rejects versions of her last flight—the Hollywood movie, in which she dies as a spy; the crackpot theory, in which she survives and comes back to America in disguise; the definitive biography, in which she drowns. Her own rendition is an interior monologue through the twenty hours of the last flight, punctuated by the actual radio traffic. Whenever necessary, she concentrates on the work of flying, then drifts into images of her life, in a rough chronology. She conjures her childhood on the banks of the Missouri, love of horses and the aeroplane, first flight and solo, first altitude record, celebrity and reluctant marriage, Atlantic and Pacific solos, Mexican flight, various crackups, and her 1937 round-the-world flight, up to the last moment. Memories are embedded in memories, and take different shapes—voice, letter, photograph, lecture, list, logbook. The current hit song When My Dreamboat Comes Home runs through her head, the lyrics misremembered in a way that shows her freedom of spirit.’’

Beckett’s obsessive identification with, and admiration for, Amelia shines through, along with their mutual scorn for “the crackpots who cash in on my enigma and ride my name like a ghost automobile down easy to the bank.’’

In addition to the justifiable anger, he catches the exhilaration of pushing the envelope:

After Atlantic war, Pacific peace: the 1st
person to cross that ocean, and at Oakland:
-Your transmission: I’m tired? – You missed
my meaning in static: of the fog, I said.
1000 hurrah, crying, by the armed guard,
shove American Beauty roses at my breast.
That landing is in the diary of my heart.

Beckett’s lifelong song project – a literal description, as he also has a new CD, Love & Trial, with the British musician Stuart Anthony, of spoken and sung translations of ancient and Renaissance Greek poetry to be released digitally on November 1 (https://www.youtube.com/watch?v=OPyMU5AaE74) – is a break from the postmodern cynicism of the moment. That’s on purpose.

Asked why he continues to be drawn to such iconic figures when the culture has moved in the opposite direction, the poet responds:

“’The Muses are the daughters of memory,’ Ezra Pound recalls in the Pisan Cantos. In my elementary school library, I’d be found in the folklore section, on fire reading those tall tales, or in American history, biographies of its heroes. That charge has lived on in me, as inspiration. And as a natural Fifties rebel, following Presley and Ginsberg, I was ready to ignore cultural tides, and the literary fashion against long narrative poems, to stay true to it.’’

“For me, Paul Bunyan isn’t an example of the destruction of ecosystems for profit. He’s the American spirit, trying by bragging and laughter to be equal to the colossal landscape. Wyatt Earp isn’t a boy’s story hero with an unfortunate turn for gun violence. He’s a deacon, following Jesus, still in love with his dead wife, doing all he can to avoid violence, to keep his soul alive, in Tombstone. Amelia Earhart isn’t a pile of bones on a deserted Pacific island, or a lost airplane. She’s a woman who lived and lives, who, in a world which oppresses women, liberated herself. Why does she still come up in the headlines every few months? Her disappearance is the number one unsolved mystery, but that’s only the surface. She’s an emblem of the equality of women, and her spirit will haunt the news until that equality is made real in the way we live.”