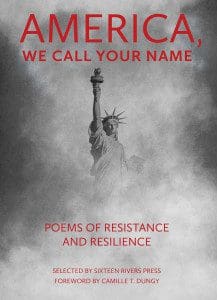 The first image we encounter in America, We Call Your Name: Poetry of Resistance and Resilience (203 pages; Sixteen Rivers Press) is that of Lady Liberty in the midst of a grey fog; it’s unclear as to whether she is receding or emerging.

The editors have stated that the impetus for this anthology was a desire to help unify the country after the 2016 Presidential Election. The Trump Administration symbolizes the oppression that these poets are resisting; the collection acknowledges that the election woke up many people who had grown politically complacent.

For this anthology, Sixteen Rivers Press, a shared work-collective of Northern California poets, gathered material from writers of numerous backgrounds and eras. To produce a democratic work that responds to the “cultural, moral, and political rifts that now divide our country,” they sought “poems of resistance and resilience, witness and vision, that embody what it means to be a citizen in a time when our democracy is threatened.”

From Virgil and Dante and Shakespeare to Pablo Neruda, Po Chu-I, and Thursday’s just posted “Poem-a-Day,” the vast array of voices is inspiring. Many of these poems touch on themes of land, belonging, and truth, yet the spirit of resistance imbues every selection , no matter the era—although it is disheartening that we are still asking the same questions without finding any lasting answers. America, We Call Your Name reminds us that the conviction of resistance is timeless and inevitable.

Frank Bidart’s poem “Mourning where we thought we were” arrives early in the collection:


therefore, thank you Lord/
Whose Bounty Proceeds by Paradox,/
For showing us we have failed to change.

This despondent sentiment lingers through many of the poems. In “Money,” Jane Mead asks, How did the earth come to belong to humans?

Like the layers of a geological formation, the questions these poems ask exist in sedimentary sympathy. Centuries before our current moment, Dante also wrote in the spirit of resistance. The anthology features an excerpt of Dante’s Paradiso – from the moment in the epic trilogy when he faces exile from Heaven.

You shall leave behind all you most dearly love/
and that shall be the arrow first loosed from the exile’s bow.

These words are already poignant within the diegetic context of the poem, but they bear even more emotional weight with the knowledge the author himself was condemned to exile. Dante knew the pain of losing one’s home in the wake of oppressive regimes. He also wrote the Commedia in Italian: the vulgar language, the language of the people.

Dean Rader writes, “[Poems] are the instruments of the people, not the palace.” Each poem is a voice raised against the hegemonic castle of oppressive societal structures, joining together in a symphony of resilience. From ancient to contemporary voices, the poet’s essence remains constant: we ask questions. To the extant power systems, we ask why. Art does not acquiesce – it rebels.

Emma Lazarus composes a vision of the Statue of Liberty. She writes:

A mighty woman whose flame/
is imprisoned lightning, and her name/
Mother of Exiles. From her beacon-hand/
Glows world-wide welcome; her mild eyes command/
The air-bridged harbor that twin cities frame

America, We Call Your Name invites us to think for ourselves: do we view the future as the Statue of Liberty emerging from her cage of fog, or is she disappearing into the shroud? The existence of the anthology itself ­– a collaboration of passionate humans – may compel us to see Lady Liberty coming out of the fog, continuing in her resistance even in the midst of seemingly inescapable despair. Without hope, there is little to hold on to. As we struggle in search of the strength to carry on, the work of great poets like those in this anthology might serve as a beacon guiding our way.