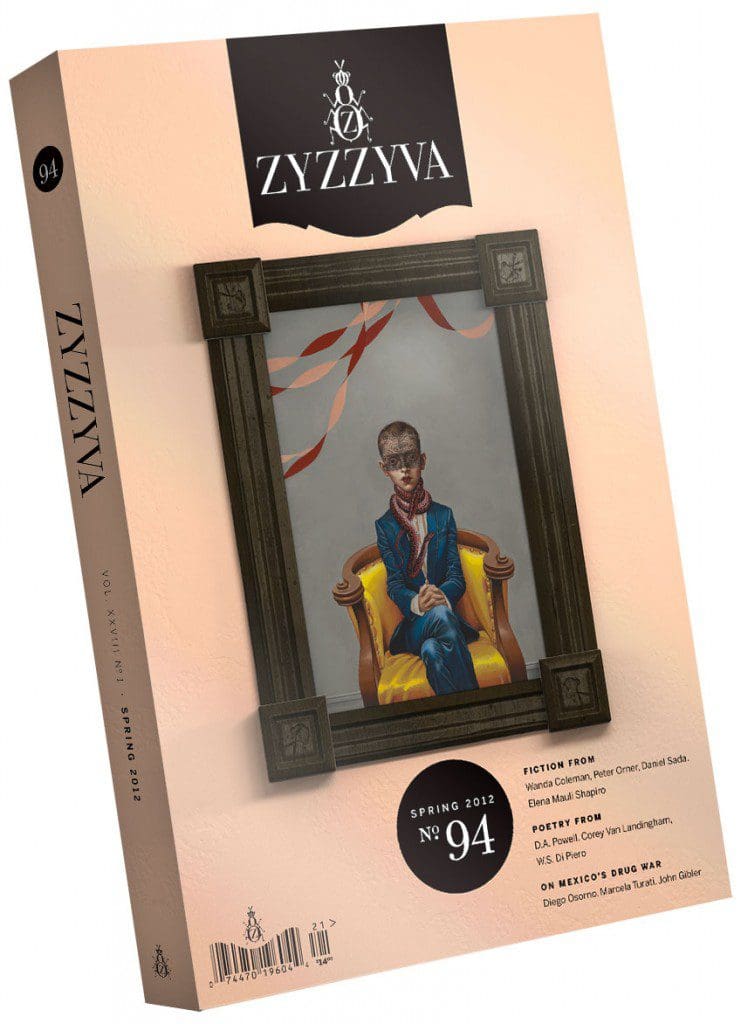 “Cast ’em out! For he deceives us all!” Some call him Preach, others call him Crazy John. We’ve called him out of his Christian name so much we’ve forgotten it. Most of us snigger at his ranting, sometimes to his face, daring the retort if he’s bold enough to make one. At those moments, he

Cristina Rivera Garza is a Mexican novelist and two-time winner of the Sor Juana Ines de la Cruz Prize (the only writer to have won the prestigious award twice). A professor at the University of California at San Diego, she writes a weekly column for the newspaper Milenio in Mexico.

“Keep Writing,” her essay in ZYZZYVA’s Spring 2012 issue, originally appeared in Milenio in October 2010. Translated into English by John Gibler, the piece tries to answer the question, What is the point of being a writer amid times of madness, whether it be Mexico’s drug war or other, similar episodes of violence and despair? Garza Rivera offers as many reasons she can, not least among them being, “Because through that rectangular artifact that is the book, we communicate with our dead. And all dead are our dead.”

The following is an excerpt from her essay.

Mauro Gallardo is a writer and ukulelist living in Monterrey, Mexico, and recently completed his first novel, I Liked You Better When You Were A Junkie.

In Gallardo’s short story in ZYZZYVA’s Spring 2012 issue, “Get In and Toss the Gun in Back,” translated by ZYZZVA Managing Editor Oscar Villalon, we encounter a narrator who relies on good humor and quick thinking to deal with the mayhem that has come to define his city. (Monterrey is Mexico’s third largest city and one of the hardest hit by the ongoing drug war.) Coming back from a disastrous date, he diverts a carjacking into something like a joyride. Funny and surprising, Gallardo’s story could be viewed as one young man’s way of staying human amid a wretched situation.

The following is an excerpt from his story.

The writing on Mexico’s drug war in ZYZZYVA’s Spring 2012 issue featured some harrowing pieces of reportage by young authors and journalists Diego Enrique Osorno and Marcela Turati. (You can read their pieces in full here and here.) But it also featured impressive pieces of fiction, such as this short story by the internationally-acclaimed Mexican author Daniel Sada (1953-2011).

Translated by Katherine Silver, “In a Way That Satiates” tells of a narco-party that goes sideways when three heads are discovered in an ice chest otherwise full of beer. It’s a striking piece of fiction, both funny (“At first the drinks were cola sodas: Coca and Pepsi, each according to his preference, but then they brought out the Fantas, Mirindas, and Orange Crushes. Not a lot of diversity, one might say.”) and sinister (“Female wake-weeping that waned with time, it had to; especially because the mental always ends up defeating the sentimental. That’s the way of the world.”).

From mid-August through mid-September, the Caravan for Peace will wend its way across the United States, having started in San Diego and eventually arriving at Washington, D.C.  Part of the Movement for Peace with Justice and Dignity, an organization in Mexico “dedicated to giving voice to the families of victims of [the drug war] and to publicizing the real costs of this war,” the MPJD believes “it is the Mexican government’s responsibility to provide justice and reparations” to the thousands upon thousands of victims of the drug war and is doing what it can to hold that government accountable.

The Caravan for Peace seeks the same from the United States, and will be traveling the country, meeting with various folks and organizations that agree several urgent issues must be addressed here, too, to help end the chaos. They are “the need to stop gun trafficking; the need to debate alternatives to drug prohibition; the need for better tools to combat money laundering; and the need to promote bilateral cooperation in human rights and human security in two priority areas: promotion of civil society and safety, as well as protection and safety for migrants.”

With that in mind, this month ZYZZYVA will run excerpts from our section on the drug war in the Spring 2012 issue. (The section is available as an ebook, too, from Byliner.) We begin with journalist and author John Gilber‘s introductory essay, presented in full. Gibler’s essay gives context to the various works appearing in the section (a couple of which he also translated). Published in April, the themes of the essay still hold true (though you can read an update to the essay here.) The statistics are grim, but they do not occlude the fact that there are valiant people–among them, poets, writers, and artists–peacefully seeking a change.

In Mexico, poets, journalists, artists, bloggers and students lead the fight for civil society and conscience now being called “The Mexican Spring.” A fight against violence and corruption, but also against the lies and submission propagated by Mexico’s all powerful media monopolies. ZZZYVA’s [Spring] issue on the Mexican drug war takes you to the front lines with pieces by Mexico’s bravest and most talented independent journalists. Anyone who reads it will get a strong dose of Mexico’s darkness, but also of the exhilarating new winds gathering force every day.—Francisco Goldman Essential pieces of recent journalism from Mexico in translation for […]