Because writing, by being writing, invites one to consider the possibility that the world could be, in fact, different.

Because the secret machinery of text is the imagination.

Because here is a banner stretched out that clearly reads, “writing’s place is also out there, just before your eyes, in the public space of your steps and of the imagination.”

Because she who writes will never conform.

Because writing’s essence perhaps consists in nothing more than showing your face and, if necessary, turning the other cheek. Poetry does not impose, said Paul Celan, it exposes. But these are small concerns. Because to confront is, above all, to confront death. To put yourself in pursuit of the unknown or, it’s equivalent, the dark. In that ethical and aesthetic position of an exhibition that opens and, upon opening, damages, where there arises with singular pressure the certainty that death, regardless of its circumstance, is violence, there, on that path, both the face and poetry go it alone. They are alone. For that reason, too.

Because writing teaches us that there is nothing “natural.” Things are closer than they appear, that, too, writing tells us.

Because through that rectangular artifact that is the book, we communicate with our dead. And all dead are our dead.

Because the sentence produces the memory wherein forever will live the names of Marco and José Luis Piña Dávila, Ciudad Juárez, Chihuahua, January 30, 2010.

Because the borders of the page are also the limit of the real. Because here there is a banner that reads, “tell them not to kill me.” Because belonging is something I do through you, a sentence.

Because there is an abyss at the end of every line into which it is worth the trouble to cast oneself. Or charge into. Or disappear into.

Purchase a copy of Issue 94 to read this essay in its entirety. 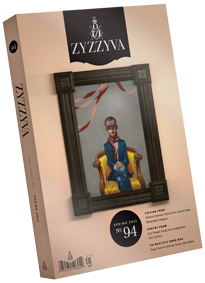 “Keep Writing” by was published in ZYZZYVA No. 94. Purchase the back issue in our shop.