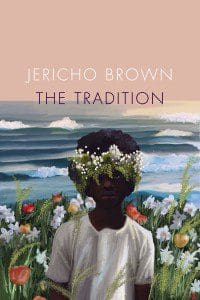 To some extent, every poet creates a persona. Think of Berryman’s Henry, for example. But Jericho Brown has done so more fully and convincingly than most. Born Nelson Dimery III, he answered to the name Jericho in a dream. In that dream the name allowed him go through a door. He later learned that the loose translation of the name is “defense,” and he discarded his birth name and became the unmistakably singular poet Jericho Brown. In the same way, he has transformed his evangelical fundamentalist upbringing into spirituality, physicality, and song.

This transformation is showcased in his latest book, The Tradition (110 pages; Copper Canyon Press), recently selected for the National Book Award Long List. Brown’s voice is nuanced, proud, and profound. His work has an offbeat formality, a love of rhyme and blues. It proclaims its own construction, as in the poem “After Avery R. Young”:

The more you look like me the more we
Agree. Sometimes you is everybody.

Blk rage. Blk city of the soul
In a very cold town. Blk ice is ice you can’t see.

This little punch at the end occurs in many of Brown’s poems. They praise, they explicate, they beseech and beguile, but they won’t let you be. The book is a varied texture of canny observation, the political, and fierce, incantatory praise. The love poems are especially strong:


All that touching, or

Barely touching, not
Saying much, not adding

Anything. The cushion
Of it, the skin and
Occasional sigh, all
Seemed like something worth
Mastering.

So skillful, and the word choice of “mastering” leads to the next, surprising passage:

…I’m sure
Somebody died while
We made love. Some-
Body killed somebody
Black.

Brown himself has said, “Every love poem is political. Every political poem must fall in love.” And this poem turns next into something more complex, more unknowable, while the reader follows, led by rhyme, by line break, by image, to a tender, unexpected conclusion—a virtuoso performance in a short love poem that encompasses so much.

Sometimes, reading this book, the bursts of ecstasy and longing remind me of Christopher Smart; sometimes they remind me of no one but the poet himself, loving, longing and twisting in his being. The presence of the poet is inescapable, even for himself, as in the wonderful poem “Dark”:

I am sick of your sadness,
Jericho Brown, your blackness,
Your books. Sick of you
Laying me down
So I forget how sick
I am. I’m sick of your good looks,
Your debates, your concern, your
Determination to keep your butt
Plump, the little money you earn…
…I’m sick

Of your hurting. I see that
You’re blue. You may be ugly,
But that ain’t new.
Everyone you know is
Just as cracked. Everyone you love is
As dark, or at least as black.

As every love poem is a political poem, the poems in The Tradition hammer home a message: We are imprisoned in our history, and there is a lot of wreckage—the compound debris of old wrongs, of perception, of the body—to clean up:

… I can’t
Blur your view
Of the pansies you’ve planted
Outside the window, meaning
I can’t kill the pansies, but I want
To do the killing. I want you
To heed that I’m still here
Just beneath your skin and in
Each organ
The way anger dwells in a man
Who studies the history of his nation.

This vision of an inescapably fraught context (as with “mastering,” the choice of pansies as the flower here is anything but accidental) permeates the book:

Like the viral geography of an occupied territory,
A region I imagine you imagine when you see
A white woman walking with a speck like me.

…Gratitude is black—
Black as a hero returning from war to a country that banked on his death.
Thank God it can’t get much darker than that.

The strength of his work is enhanced by Brown’s deftness with rhyme, by how well he uses it to underscore those punches. This is nowhere more evident in his dramatic reinvention of the sonnet that he calls the Duplex. These fourteen-line poems are couplets made from cut lines of old poems of nine or eleven syllables. (You can read Brown’s essay on the form https://www.poetryfoundation.org/harriet/2019/04/invention.) But briefly, the lines form an intricate rhyming, echoing pattern, each one building on or twisting the line before, with the first and last lines the same or nearly the same. My favorite of these appears on the back of the book, and like all of them it’s titled simply “Duplex.” The first and last couplets give you a sense of the form:

I begin with love, hoping to end there.
I don’t want to leave a messy corpse.

…In the dream where I am an island,
I grow green with hope, I’d like to end there.

And I’d like to end here, too, by saying The Tradition has a lot to say, and says it in a unique and powerful voice.

Jericho Brown will be reading at 12:10 p.m. on Thursday, October 3, as part of the Lunch Poem series at the Morrison Library in Doe Library at UC Berkeley. Admission is free. Brown will be reading later that day at 7 p.m. at Alley Cat Books in San Francisco, sponsored by the Marin Poetry Center.