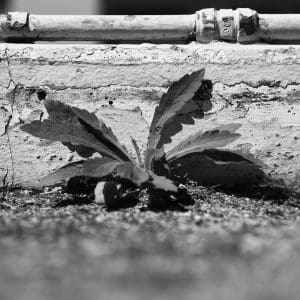 Unbeknown to many in San Francisco, we are in the presence of several brave species helping to terra-form the city and stave off a future defined by man’s carbon footprint. These “volunteers,” as experimental philosopher Jonathon Keats calls them, represent the first members of his new organization, The Pioneers for the Greater Holocene, and they’re closer than you might think—they might even be under your feet.

These ambassadors are the plants that sprout from the sidewalk in even the wealthiest neighborhoods in the city. Though acknowledging that they are commonly dismissed as unsightly, Keats—previously known for creating Alien Instruments and Superego Suits—has taken to documenting these life-forms in a series of intimate black and white portraits. He hopes this approach lends the plants some dignity, and might cause people to view them in terms of the beauty, and not the blight, they bring to an urban environment. While taking the photos, Keats gets down on the ground to be at eye level with his subjects. Speaking of these plants, Keats admits, “I go back and visit them and water them sometimes. Even though they don’t need me to grow, it doesn’t mean there’s no benefit there.”

Keats’ portraits of the plants are currently on display and viewable by appointment at San Francisco’s Modernism Gallery. He suggests that, in many ways, this photography is representative of what he is attempting to do with the Pioneers, which includes “creating a model for a world to come, a world we would want to inhabit.” It’s a model in which no species is taken for granted, even if they sprout from cracks in the pavement. 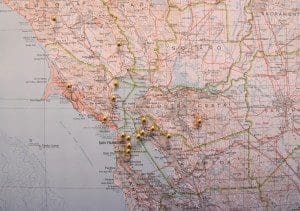 Also at Modernism Gallery is a massive map of Northern California, which Keats invites gallery patrons to decorate with pins specifying locations they feel represent the world they’d like to see in the future. During the busy opening night event this month, the crowds took great delight in (quite literally) hammering their pins into the map. Anyone is also welcome to become a member of the Pioneers for as little as a one-dollar donation. Keats stresses that interested parties can also join for less, though a $40 donation will secure you a stylish Pioneers for the Greater Holocene T-shirt, a convenient way to show your fellow citizens your interest in preserving the current geological epoch.


The Pioneers formation was in part inspired by the upcoming determination by the International Union of Geological Sciences as to whether the current geological epoch, known as the Holocene, has come to a premature end due to man’s harmful impact on the planet, thus placing us firmly in the Anthropocene. While most scientists seem to take the Anthropocene’s arrival as a foregone conclusion, implying that the planet will be blighted by humans for millions of years to come, Keats argues, “Pessimism is not a scientific way of thinking…We cannot accept the catastrophic results of declaring the Anthropocene an epoch.”

He stresses that work can be done and changes made, even on an individual level, that could perhaps alter the Anthropocene from a multi-million-year epoch to something more like an unfortunate but brief episode during humanity’s time on Earth. 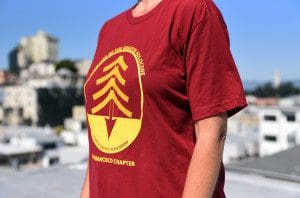 One might expect the Pioneers would find an ideal base in the Bay Area, where so many people believe in the reality of climate change. Keats explains this isn’t necessarily so. San Francisco, for example, is simultaneously “the best place” and “the worst place” to launch such an endeavor. Keats sees the Bay Area as having a culture of compartmentalization—people genuinely care, but often feel as though simply caring, even if divorced from action, is enough. He cites “a paralysis among those who recognize the problems of climate change” because “when there’s no clear path forward, people end up doing nothing, which is not tenable to me.” Yet the situation is not without hope: “We are unable to act on our beliefs when the situation seems futile, but I also believe that any small action can potentially pull us out of that stupor.”

Emphasizing the concrete, active nature of the Pioneers for the Greater Holocene, Keats believes small gestures, from planting seeds across the urban environment to documenting and protecting what current plant life exists, can have massive ramifications. “Since the Industrial Revolution, we have had an attitude of antagonism towards other species,” Keats explains. “We take for granted that they will be compliant. But in reality, if we disappear, they will take over—so how compliant can they be? The Pioneers are about taking the opposite tack and advocating a sharing of power between species at every level.”

To this end, the Pioneers have distributed starter packets throughout the city, containing seeds for native grasses that will take root wherever people spread them, as well as a special nutrient mix for lichens capable of turning concrete into fertile ground. With enough time and effort, it’s possible the Pioneers could see San Francisco radically transformed into an urban forest. No doubt such a transition would create some measure of chaos, at least in the beginning, but Keats sees this as entirely in keeping with the Bay Area’s reputation for disruption. “Nature isn’t Disney or Bob Ross,” he reminds us. “It’s not altogether peaceful.”

Although the Pioneers’ vision for the planet includes a much more level field between man and nature, Keats argues, “This is in no way meant to be a Luddite move or a call back to the past.” This will likely register as good news to San Francisco’s pervasive tech industry, though Keats is leery of their involvement. “Technological industries have a tendency to see themselves as saviors of what technology has wrought in the past,” he states. 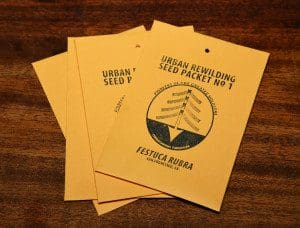 The truth, as the Pioneers see it, is that for the last 11,700 years the Holocene has been good to us—as stewards of the planet, we ought to try our best to see the epoch doesn’t come to an abrupt end many millennia before its time. For while epochs are generally defined as lasting millions of years, it’s all but certain the Anthropocene will not last as long; mankind’s accelerated destruction of the planet will see humanity’s extinction long before then, ushering in an entirely new epoch. “This is a reason for pessimism and soul-searching,” Keats admits, “but also optimism and soul-searching.”

Keats is not fazed by those who view the Pioneers for the Greater Holocene as something of a poetic but futile gesture. “When you start with the literal, you end up in a fist fight,” he says. “But the arts have a history of changing the way people think.” The Pioneers, then, do what Keats has perhaps always done: utilize “play and absurdity” as a means to “encourage re-thinking, re-framing, and re-alignment” on both an individual and collective level, and to “challenge ideas that seem entrenched.”

Admiring Keats’ stark black and white portraits in the Modernism Gallery, it’s difficult to dismiss the efficacy of his methods. The sight of these oft-ignored but persistent plants inspires one to both watch their step and consider the life that is all around us—if only we look for it.