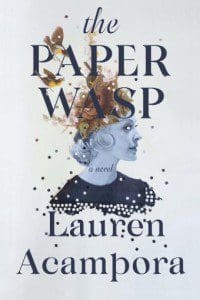 It’s easy to conceive of the world of celebrity as a modern day pantheon, populated by figures as remote and untouchable as the gods. But how often we forget that those who fill the pages of Us Weekly are, in fact, people, too –– with family, old flames, and, yes, former classmates tucked away in their distant pasts. As Lauren Acampora’s first novel, A Paper Wasp (289 pages; Grove Press), opens, Abby travels to her ten-year high school reunion in Western Michigan in hopes of making contact with Elise, a former childhood companion now on her way to Hollywood stardom. Although the two only share a few fleeting words at the rather dismal event –– the mentally ill, artistically inclined Abby is dismayed to find most of her classmates have settled for a more conventional life of marriage and childrearing –– Abby takes Elise’s tossed off invitation to visit her as an excuse to steal her parents’ credit cards and a book a flight to L.A..

Unbeknownst to Elise, the decade since graduation has not been kind to Abby: she’s manic-depressive, lives in her parents’ house, works the cash register at grocery chain Meijer’s, and the scar along her abdomen serves as a memento of a failed suicide attempt. If Abby thinks a sudden venture to Los Angeles and the possibility of rekindling her friendship with Elise will solve all of her problems, including a stunting case of artist’s block, she is sorely mistaken. Her psychological issues are as tightly packed as the luggage she takes on the long flight to California.

A Paper Wasp almost dares readers to see how long they can occupy Abby’s truly dark and tormented mind. Abby is clearly obsessed with her grade-school friend:


After you were tucked into bed, breathing loudly through your mouth, I stood in the room for a few moments, watching you. I remembered those everlasting slumber parties, those torturous nights when I’d stare at your face in the dark –– your profile like that of an illustrated girl in an English children’s book, the fine articulations of an Alice or a Wendy, the curl at the nostril, the vermillion of the upper lip –– before you turned away, in slumber, and the hair fell across your face, screening me out.

Before long, Abby has ingratiated herself into Elise’s life, and secured a position as the starlet’s live-in personal assistant. Abby soon begins to fantasize about both Elise’s lover, the Argentinean actor and polo player Rafael, and the possibility of collaborating with experimental film director Auguste Perren, who hovers around Elise’s social circle. If A Paper Wasp were following a more cliché or expected route, one might expect Abby to ultimately usurp her friend’s position in the movie industry, leading to a tale of sisterhood turned to professional and romantic rivalry. But Acampora is true to her characters: Abby is simply too damaged and toxic to ever make inroads in show business. She comes to alienate nearly everyone she meets, and even her appraisals of Elise absolutely drip with disdain, despite their supposed friendship:

I was an observer, a tagalong, a pet. It didn’t bother me to be left in waiting rooms during dress fittings, to sit in the parking lot during script workshops. I didn’t mind not being introduced when you ran into an acquaintance at Nobu. I was admittedly lost by the politics of the film industry, useless as a strategic adviser. I was simply there to listen, to groan in sympathy and glow with pride. And listening was what I did best, what I was grateful to the heavens to be able to do. I loved the sound of your voice. Whatever its petty grievances or vacuous prattle, I would have been happy to hear it forever.

Acampora’s 2015 story collection, The Wonder Garden, displayed a Cheever-esque talent for depicting suburban dysfunction, and she brings that same flair for middle class despair to her characterization of Abby, particularly when describing her dreary college days in Michigan, which stand in sharp contrast with Elise’s sunny existence in California:

When the leaves flipped their colors that first September, it was a personal betrayal, sleight of hand. Rather than slowly fading into gold and umber, the trees burned red. They surrounded the quad in a satanic circle. I sat on the grass and tried to quietly read the newspaper. A terrorist siege in Russia, children taken hostage with their parents. I turned the page. The Janjaweed, burning up villages. Students threw frisbees around me and laughed on their way to the dining hall.

Living with Elise, Abby gains access to the Rhizone, a Scientology-esque creative compound overseen by the enigmatic Perren. It’s there she partakes in guided dream workshops in order to access the Spring, the Rhizone’s concept of the creative unconscious as influenced by the works of Carl Jung. “It’s very important that you listen to these dreams,” her guide at the Rhizone instructs her, unaware of just how unstable Abby is. “Their messages can be truer than life.” This sets Abby on a dangerous course.

Despite the often-vapid nature of Hollywood and Elise’s solipsistic worldview, it’s difficult not to feel some sympathy for the actress, especially as Abby weaves a destructive path around her. The novel nears its conclusion as Abby reaches the crescendo of her latest manic phase, and we have to fear for those caught in the young woman’s machinations. A Paper Wasp is a dark fable on the nature of friendship, fame, and the way dreams can influence our waking life. It’s also a reminder of the consequences of mental illness when, as in Abby’s case, it goes unchecked and untreated for too long.