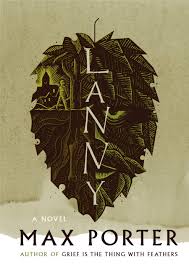 In came the sound of a song, warm on his creaturely breath, and he snuggled up against me, climbing up on my lap, wrapping himself up around my neck.

So begins Lanny (216 pages; Graywolf Press), the latest novel by Max Porter, author of Grief Is the Thing with Feathers. Lanny takes place in a village outside of London, where there lives a being known as Dead Papa Toothwort—a formerly mythic figure among the townspeople, now reduced to a popular Halloween costume and a warning for schoolchildren. After napping for an indeterminate amount of time, Dead Papa Toothwort wakes at dusk to embark on his favorite pastime: listening to the music of chattering voices drifting from the village. He listens especially for the voice of an eccentric young boy who has recently moved to the village with his parents. Porter’s description of this boy, Lanny, is ethereal:

His eyes are like spring hornbeam, a very fresh green.

…he is growing up, shedding his fairy skin…I can’t imagine this boy becoming a man.

Lanny cycles through passages from the perspectives of Dead Papa Toothwort, Lanny’s mother, Jolie, and father, Robert, and their neighbor Pete. While Robert adjusts to a new commute from the village into London and often struggles to understand his son, Jolie, an actress and crime fiction author, adapts to their rural lifestyle and loves Lanny unconditionally. She arranges for Pete, a famous and aging artist, to give Lanny art lessons. The two quickly form an unlikely and joyful friendship, tromping through the forest together to sketch, climb trees, and discuss life, in scenes reminiscent of A.A. Milne’s Hundred-Acre Woods.


Lanny is constantly flitting off to locations unknown, much to the concern of the adults around him, but always turns up with delightful questions and singular insights. That is, until he disappears entirely, and the novel—until now a quiet reflection on nature, childhood, and familial relationships—slips into a harrowing page-turner. The scope of the story grows from the village to the entire country as reporters and investigators descend on Lanny’s family and his case makes headline news. Lanny’s absence is filled with chaos, pain, and scandal, as his parents scramble to find him and their fellow villagers attempt to assign blame. At last, enter Dead Papa Toothwort, who conducts a surrealist performance in order to confront Jolie, Robert, and Pete with hard truths about themselves and Lanny’s whereabouts.

With Lanny, Porter accomplishes very much with so few words. Dead Papa Toothwort’s passages—akin to concrete poetry—illustrate the point-of-view of a true outsider, living beyond human consideration, while Lanny’s Mum and Dad represent an incredibly honest and unromantic portrait of family life. Their perspectives unmask the unkind thoughts humans experience and endure even during times of stability, or perhaps in their efforts to preserve such stability—the necessities of maintaining marriage and family. Lanny and Pete’s friendship, on the other hand, is outside of the domestic, situated in the natural world, and explores the poles of youth and age.

The novel is an ultimately optimistic rendition of the loss of innocence and an examination of growth, but it’s a growth that requires burying uninhibited, elfin childhood. Lanny, who embodies the impossibility of timeless youth, gives and gives to others, but must lose his young self. With time, as Dead Papa Toothwort knows, the forest remains the only constant:

By the time he gets to the edge of the woods he has crumpled into nothing more than a whiff or a suggestion, he is only silent warm crepuscular danger, and the badgers and owls have seen this before, and they know not to greet him, but to hide.