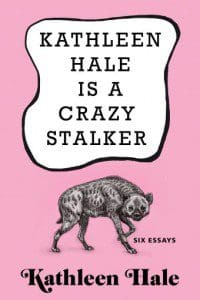 Kathleen Hale’s essay collection, Kathleen Hale Is A Crazy Stalker (174 pages; Grove Press), presents a fascinating reflection on the sexual assault that shaped part of Hale’s life, as well as on humanity’s rapacity, Internet trolling, and mental illness. Although the collection of six non-fiction essays grapples with heavy topics, Hale’s self-deprecating humor helps to build and release tension, showcasing the irresistible charm of her writing.

In the book’s titular essay, Hale recounts the time she once visited a negative Good Reads reviewer’s house in an effort to make amends. The story takes multiple turns as Hale discovers the negative reviewer’s identity is not what she thought. Hale eventually finds herself in a haze of hate mail and online trolling, leading her down an obsessive Internet black hole. What grounds the essay is Hale’s unwavering self-awareness: she continually questions the power we have over our minds and impulses—especially as they spiral out of control. Hale exemplifies these shortcomings when she ends up in an all-women’s mental hospital. Sitting in a therapy group, she describes the illusion of sanity:


The therapist urged us to stop. “What’s so funny?” she kept asking, and maybe we could have tried to explain it to her—the arrogance and self-delusion I’d just articulated—but instead we kept laughing.
“And I’m famous!” the toothless woman shouted, and the rest of us howled until our teeth clacked and our eyes brimmed with water…

Human impulse, whether it’s an obsession with reading hate mail to the point of an emotional breakdown or trying to understand our sometime predatory nature, provides a guiding thread connecting each essay. To make sense of the sexual assault she experienced in college, Kathleen turned her naive childhood fascination with animals into an obsession with predators and how best to defend herself against them. In “Prey,” her soul-barring essay on the strength of sexual assault survivors, the narrative offers scientific quotes about animal behavior interspersed with sections of the transcript from her rape trial. As in all of these essays, nothing is straightforward, but rather a swarming collection of thoughts, emotions, and humor, all skillfully constructed into a narrative. It’s impossible to walk away from the collection without sensing a tinge of madness, yet at the same time sympathetically identifying with the author’s voice.

Perhaps the self-identification stems from Hale’s dissection of something so innate to humanity: our inclination to be compelled by our impulses, behavior which is not dissimilar to animals. Hale’s fascination with animals continues in “Cricket,” when she attends the Miss America Pageant in Atlantic City. The contestants are compared to animals in the wild:

On the big screen, I caught a glimpse of Miss Alaska, smiling brightly like she’d won and hugging all the other losers, their heads tipped back in jubilee, teeth bared.
Primates smile to submit; if a beta meets an alpha in the wild, he shows his teeth to indicate his inferior rank. It’s called a fear grin. Sociologists say human women smile more than men because there lower social status motivates deference. They smile to indicate attentiveness to the needs, goals, and accomplishments of those who are more powerful.
If I’d learned anything in Atlantic City, it’s that girl were expected to lose like winners and win like losers.

This essay presents a tour of the intricacies of the pageant, including its sexism, racism, and fixation with beauty. Perhaps most interesting of all, Hale herself proves not immune to the pageant’s toxic culture. She is brutally honest when she admits to engaging in harsh criticism of the contestants. Like most great writers of nonfiction, she is acutely aware of her flaws; in the end, she finds herself the most ridiculous of all.

Hale’s collection does not fail to shock. Her maze of a mind brings her to strange locales, including Snowflake, Arizona, where an environmentally ill community lives in isolation; Okeechobee, Florida to kill feral hogs; and the hills of Griffith Park in Los Angeles to hunt a coyote. She recounts these experiences with a humorous edge. Hale’s fascinating essays challenge readers to examine and perhaps even embrace the animal nature in everyone –– the mania, the moments of obsession, the pull of emotions.