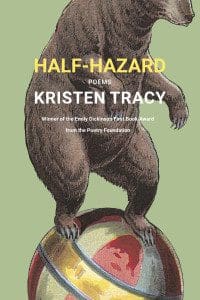 One of two epigraphs for Kristen Tracy’s debut collection of poetry, Half-Hazard (94 pages; Graywolf Press), advises that, “when a bear attacks, the victim who fights back is likely to fare better than the one who plays dead.” Although this is useful information to have in case of a rogue bear attack, it’s not as helpful when considering how to read the stunning assortment of poems included in the book. Readers might be better served if, rather than attempting to fight the sweeping flow of Tracy’s fantastic lines and vivid imagery, they “play dead” and allow it to wash over them. Tracy, who is also a prolific author of many young adult novels, brings her understanding of the youthful psyche to the page as she describes her experiences growing up in a Mormon farming community and explores themes of loss, sexuality, and leaving home in sharp, playful verse. The winner of 2018 Emily Dickinson First Book Award, Half-Hazard practically overflows with a diverse array of animals, including bears. Recently, Tracy, whose poems were published in ZYZZYVA No. 112, spoke to us about the writing process, family history, and interspecies seabird warfare.

ZYZZYVA: A zoo’s worth of animals appear throughout your poems in Half-Hazard— tigers, lions, and bears (oh my!) pop up within the first few pages. What draws you to animals, and do you have a favorite?

KRISTEN TRACY: I grew up in a small Mormon farming community near Yellowstone Park. Animals were everywhere, even in the nightly news where reports of bear attacks and buffalo gorings dominated the summer news cycle. So I’ve been captivated by animals since my childhood. Bears are probably my favorite animal. A few years ago I went to Transylvania and toured a bear preserve with my three-year-old, and I kept enthusiastically pointing to all the bears and he finally said, “Let’s go home. This place is boring.” So I pointed out more bears and he said, “Mom, those bears are boring.” And so I fear bear adoration is not a hereditary trait.

KT: I live in Los Angeles County right now and I’m really happy here, so it feels like home. For me, the place where everything started is Idaho. It held my whole childhood, so I’m still pinned to it. A few years ago my dad was doing his estate planning and asked me to sign off on things. He owns a propane company in Idaho, and I realized in signing the paperwork that he’d made me vice president of the propane company, and so I called him and said, “I can’t be vice-president of a propane company.” And he said, “Sure you can. And you can come back every year for the company Christmas party.” So I do make it back at least once a year for that. I feel like it was a pretty sneaky move on his part, to keep me coming “home.”


Z: There were so many lines in the collection that made me laugh out loud. How do you balance humor and disaster in your work?

KT: So I have a sad backstory. I’ve lost both a brother and a sister in separate car accidents. My family was overwhelmed by grief, and I realized that somebody had to be funny. So at seven I became the funny one. I basically view it as my job. And as I got older and became a writer, I started writing funny things. My children’s books are funny. I like making people laugh, so now I have my poetry do some mood-lifting work. I think that suffering those twin losses altered my lens on how I see the world. I notice tragedy, accidents, disaster. But I don’t want my readers to sit in sadness. I want everybody to be okay.

Z: You mention volunteering as a gardener on Alcatraz. What was that experience like, and what was the most surprising thing you learned?

KT: I spent several years volunteering as a gardener on Alcatraz, where I learned a tremendous amount about seabirds, particularly sea gulls, because they are brutal beasts who will destroy anything. I once watched a group of seagulls tear a line of goslings apart in front of stunned tourists who pleaded with me to stop the carnage. I wasn’t allowed to intervene, because one of the first rules I learned on Alcatraz was that when it came to the birds I wasn’t allowed to get involved in interspecies conflict. The savagery overwhelmed me. I didn’t realize I’d witness so much bird-on-bird violence. But I loved working to restore the gardens, and if I ever live close enough to the island I’d go back and garden there again.

Z: When did you start writing, and what led you to poetry?

KT: I didn’t start writing poetry until I was in college. I decided my best chance of escaping my tiny Mormon upbringing was to apply to a school far away from it. So I only applied to one college, Loyola Marymount University, and that’s where I went. My freshman year I became good friends with a rebellious Jehovah’s Witness who suggested I take a poetry class with her. I did, and my teacher, Gail Wronsky, really encouraged me and told me I had real talent. I didn’t get a lot of exposure to art growing up, or encouragement. So I really clung to this. Following a path in the arts became a way to rebel against my faith system. I spent years reprogramming myself to value something other than the Mormon belief system I’d been fed as a child. Studying and writing poetry really helped me form my identity.

Z: You also write books for young readers. What books influenced you the most growing up?

KT: I wish I’d read better books growing up. My library had a bunch of Disney books in it. Stone Soup retold as Button Soup with Daisy Duck. So I read a lot of folk tales, but they had Chip and Dale in them. Lots of Bible stories. Lots of Book of Mormon stories. I didn’t become a big reader until college.

Z: In your acknowledgments, you mention that Half Hazard has been in the works for almost two decades. What kept you going, and what was your revision process like?

KT: I can’t believe it took twenty years for this book to exist. It was all the small encouraging accomplishments along the way that motivated me to keep at it. I’d place poems in journals I truly loved. I’d win fellowships to conferences. I’d been a finalist for the Yale Younger Poet Prize and a semifinalist for the Walt Whitman Award and Sarabande Books Kathryn Morton Prize. So I figured if I kept writing poems, eventually luck would find me. And it did!

Z: Half-Hazard is your first book of poetry. What has the experience of publication been like for you, and are you working on a second?

KT: I’ve never felt so thrilled or vulnerable. Working with Graywolf has been amazing. And everybody at the Poetry Foundation has been so supportive and kind. I’m definitely working on a second book. I’m revising a poem about the propane company right now.

Read Kristen Tracy’s poetry in ZYZZYVA Issue 112, which you can order from our Shop page.