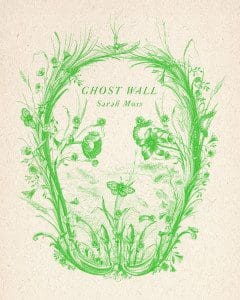 In Sarah Moss’s novel, Ghost Wall (130 pages; FSG), seventeen-year-old Silvie embarks on a trip to rural northeastern England with her family and a university archaeology class. Silvie’s father, Bill, earns a living as a bus driver, but his true passion is for the history of the Iron Age and its “bog people,” the ancient Britons who were sacrificed in this region centuries ago. Over the course of the two-week trip, the small group attempts to reenact the lifestyle of 1000 B.C., wearing scratchy tunics and hunting and foraging for their meals. For Bill, the trip is a chance to live exactly like the ancient Britons –– down to the dated and ritualistic behaviors that let him indulge in his own violent and misogynistic tendencies.

Silvie narrates the story, moving fluidly between related observations and internal monologue. The narration transitions so smoothly, in fact, that it can sometimes be hard to distinguish what is being said aloud and what are simply Silvie’s thoughts weaving themselves into the moment. Interestingly, perhaps because of the stream-of-consciousness style, the distinction doesn’t feel very important.


As the story goes on, it becomes obvious to the characters and reader alike that Silvie, desperate for independence and an end to her childhood, harbors real fear of agitating her father. Silvie’s narration suggests her mother, Alison, spends the trip (and her life beyond the trip) cooking and cleaning, obedient to Bill’s demands. Bill physically abuses his family more than once during the reenactment, but always out of sight of the others. It’s a well-kept secret until, as the trip brings their dynamic to light, a student named Molly concludes something simply isn’t right:

He hits you, she said, your dad. He’s been hitting you here. You’re scared of him. No, I said, no, I’m not, of course I’m not, you don’t know what you’re talking about. I stopped. Maybe you’re jealous because your dad left you, I thought, because he doesn’t love you, because he doesn’t care enough to teach you a lesson. Haven’t you been listening, people don’t bother to hurt what they don’t love. To sacrifice it.

While Molly and Silvie forage each day, the archaeology professor and Bill feed off of each other’s enthusiasm for the historical period. Their excitement turns dark following the reconstruction of a “ghost wall,” which was used during the Iron Age to ward off the Romans during times of war. After rebuilding it, the pair considers it an almost spiritual gateway into the past. They become carried away and eventually insist that Silvie play the part of the human sacrifice in a ritual the following night:

Silvie, said Dan, Silvie, you sure you don’t mind this? The ropes and everything? Of course she doesn’t, said Dad, she knows we won’t hurt her, she’s not stupid.
Silvie, said Dan.
I nodded. Yeah, it’s OK.
You lead her, Bill, said the Professor, after all, she’s your sacrifice.

Ghost Wall is a short and cogent book highlighting the dynamics of one family through the lens of a rather bizarre and unsettling family trip. Bringing the distant past together with issues faced by women today—most of them rooted in history themselves—Moss’ novel asks readers to consider what we might stand to gain from history, and what we must leave behind.