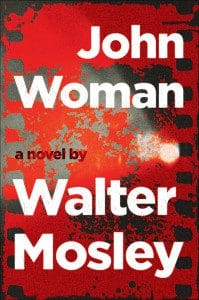 In his newest book, John Woman (377 pages; Grove Atlantic), Walter Mosley reflects on truth versus perception as embodied in the life of a man who reinvents himself into the novel’s title character. Raised by a white mother with a habit of running away and a bedridden black father nearing death, Cornelius Jones experiences a childhood that is nothing if not difficult. As a boy he’s forced to pay his family’s bills by posing as his father (the first of more alter identities to come), assuming his job as a projectionist at a silent movie theatre. The pressure of covering up his identity leads to a fateful encounter with his boss one evening in the projection room, resulting in a crime that will dog Cornelius.

From this opening, the novel leaps in time to when Cornelius has become John Woman, a professor of history at the New University of the Southwest. His class is titled “Introduction to Deconstructionist Historical Devices,” a subject seemingly prompted by his father’s interests in the validity of history. In his lectures, Woman focuses on the reliability of history and how it ties into each student’s individual life.

Though his insight is renowned and admired by students and teachers alike, Woman is nonetheless admonished by many in the same community, creating no end of trouble for him, trouble made even more pointed by the specter of what happened in that projection room years ago.


As the narrative often returns to Woman’s scholarly lectures and conversations, one particular observation could serve as the core concern of the entire novel:

History is only, is always little more than an innuendo, a suggestion that we decide to believe or not … We shall fail because history is that unsteady ground I spoke of. It is not a rigid truth but an ever-changing reality. If it were an ironclad actuality then we would be able to learn from it. But all we can do is learn about its edges, insinuations, and negative spaces.

This understanding seems to be of comfort to Woman as he undergoes great tribulations near the end of the novel. That “ever-changing reality” of history is directly reflected in his identity, profession, relationships—his life in its entirety. Through the character of John Woman, Mosley demonstrates that truth is nothing more than the perception of itself, which can be terrifying or, oddly enough, consoling.

In the end, the dramatic irony of John Woman leads us to question what we really know to be true, perhaps even bringing us to sympathize with the so-called “criminals” we have been told to vilify by society.