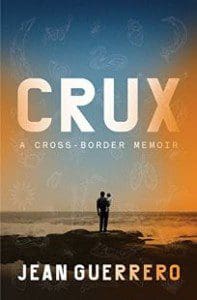 Jean Guerrero’s first memory is of her father opening the window of a plane and running his hand through a cloud, while giving her courage to do the same. She vividly remembers how airy and empty the cloud felt.

In Crux: A Cross-Border Memoir (320 pages; One World), Guerrero reveals there are still many things she doesn’t know about her father. She doesn’t know when, exactly, he began showing symptoms of paranoid schizophrenia. She doesn’t know if his conviction that the CIA was stalking him was entirely delusional, rooted in truth, or indicative of shamanic powers. “What I do know is this,” Guerrero writes with equal parts wonder and grimness, “in my first memory, Papi is making me hallucinate.”

Much like Guerrero’s lingering recollection of touching a cloud, Crux has a surreal, hallucinatory edge to it. Marco Antonio becomes to Guerrero what many emotionally (and oftentimes physically) absent and traumatized immigrant parents become to their children: abstract, mythologized, fundamentally unknowable. Throughout Guerrero’s life, Marco Antonio crossed borders between Mexico and America, between derangement and lucidity, between the mystical and the physical. In her search to understand—and perhaps secretly be more like—her charismatic and capable, yet crack-addicted, father, Guerrero crosses those borders with him. She must, for this compulsion is part of the damage he has done to her. Guerrero explains: “The daughter sees her single mother slaving away, weighed down by love and duties…The absent father’s magnetism lies, in part, in the contrast he represents. He is not tied down by anything.”


As a pimply faced, frizzy haired kid, Guerrero cast spells. (Once she successfully, though temporarily, made a classmate take interest in her.) As a beautiful and much more emotionally unstable student at the University of Southern California, she was so transformed by one Ecstasy-fueled night of raving she wrote a twenty-page manifesto on the drug’s potential to create empathy and peace on a macro and micro level. During her time at college, she also began research on covert CIA and Air Force projects, such as MKUltra and Active Denial System, drawing similarities between their remotely transmitted millimeter waves that inflict unbearable pain on civilians and her father’s “delusions.”

But it is in Mexico, to where Guerrero moves for a job with the Wall Street Journal, that she becomes most entangled with her father’s story. There, she nearly drowns at a beach, an incident rife with metaphorical resonances –– Guerrero frequently compares her father to the tumultuous ocean. One day the dam inside of her breaks: “The more I wept, the more I felt alive again. I was exorcising myself of the sea.” The sea and, finally, after three decades, her father.

Occasionally, Guerrero veers from the engagingly hallucinatory to the hysteric. Two years after her near drowning, Guerrero describes herself as a “ghost unaware of having died,” and her hands as “white, rotting appendages”; every dream she has is starkly recalled; she enters “Hell” on several occasions. When minute details are so charged, described with such intensity and drama, it becomes difficult to locate the “crux” of Crux—indeed, the title is used differently each time it appears.

It is easy, however, to forgive Guerrero—digging into our resilient immigrant parents’ and grandparents’ pasts is a tricky, nasty business. It can be difficult, shameful even, to look directly at their humiliations and failures, yet Guerrero bares it all. She describes a time in her father’s youth when his mother left him alone at home, crying, to go to the theatre with some family. Claustrophobic and still sobbing, Marco Antonio broke a window and sat on a bench outside of his house. Despite having always been uncommonly sensitive and expressive, “Marco stopped crying after that. He started sleepwalking. He remains a sleepwalker as I write this.” Later in Crux, Guerrero reveals how this episode (relatively harmless compared to the physical abuses her father suffered) may have contributed to his illness, citing an expert: “Laing argues that ‘schizoid’ symptoms develop in individuals who seek to eliminate in themselves natural impulses, such as a desire to be touched.” Though such a connection between trauma and repression is tenuous, many children of immigrants have seen how inescapable the past can be.

If Marco Antonio shows Guerrero the power of the past, her mother, Jeannette, shows her the power of re-interpreting it. The past is not static, and the present less so. One moment shines in her childhood, amid her father’s deterioration and reclusiveness: once Guerrero’s mother took her and her sister Michelle to buy ladybugs. When the ladybugs escaped in the car, the sisters were at first frightened then dissolved into laugher inside the storm of ladybugs. “From Mami and Michelle, I was learning the alchemy of interpretation. We could make our anguish luminous.”

Guerrero knows she has a choice in how she interprets her father, concluding, “I prefer to believe in shamans than in lunatics. It is the great gift of my Hispanic heritage.” Just as the constellation Crux has guided countless sailors, at the end of her memoir, Jean Guerrero chooses the option that, however improbably, guides her safely to shore.