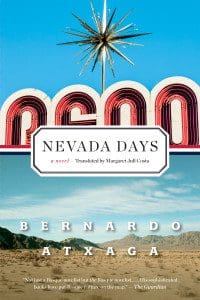 In Bernardo Atxaga’s autobiographical novel Nevada Days (352 pages; Graywolf Press), the gaudy emptiness of the Biggest Little City stands as an insufficient guard against the encroaching desolation surrounding it. Upon arriving in Reno, the acclaimed Basque author is struck by the suffocating silence of the place. Often enough, Reno appears just as much a ghost town as the actual ones Atxaga visits. To use the Daniel Sada metaphor he frequently invokes, the city appears as a stage-set version of the desert and, by extension, reality.

Nevada Days (which was first published in 2013, but now sees an English translation by Margaret Jull Costa this month) is a fictionalized account of Atxaga’s nine months from 2007 into 2008 as a writer-in-residence at the University of Nevada’s Center for Basque Studies. Written as a series of dated, journal-like entries, the novel intersperses lived moments, such as haunting excursions into the Nevada desert (“I was keenly aware of the world’s utter indifference to us. This wasn’t just an idea either, but something more physical, more emotional, which troubled me and made me feel like crying.”), with meditations on memories from Atxaga’s homeland, so that Basque country feels as near as the alien landscape and culture in which he finds himself.

Though the harsh isolation of the desert will prove to be tempered by the genuine welcome he finds in Reno, danger looms large during Atxaga’s time there. He palpably conveys the sense of fear around him as a serial rapist continues to attack women near his home on College Drive, where he lives with his two daughters, and a college student next door, Brianna Denison, is kidnapped and murdered.


“We were trapped beneath a taut membrane,” Atxaga writes, “which captured and amplified every sound, every movement: the police sirens, the clatter of helicopters overhead, the checkpoints on the exits from the interstate, the interrogations that took place in the street itself and in people’s houses.”

When not facing the immediate threat of a violent criminal in their midst, residents seem detached from local affairs. National politics and war are felt acutely. Presidential candidates speak to the world-changing significance of the upcoming American election, while Atxaga notes the names published in the Reno Gazette-Journal of locals recently felled in the Iraq War.

Atxaga gives us an outsider’s clear look at American life during the pre-Great Recession, making even the mundane appear strange. He sheds light on the implicit violence of a country at war (albeit a distant one), and its society’s self-absorption and self-importance, adding another dimension to his novel. Though his account is unromanticized, it is not unforgiving. And though it focuses on America a decade ago, his insights still ring true, making the book as relevant as ever.

At one point Atxaga—feeling out of place, an intruder—attends the funeral of a fallen soldier in South Lake Tahoe. The pain of the soldier’s family and friends, along with the priest’s constant mantra of “Honor. Duty. Sacrifice.” and a pamphlet of a soldier’s pledge to destroy enemies of the United States, shake both Atxaga and the reader.

As Atxaga attends many more funerals over the course of the novel, Nevada Days often slips into requiem. That somber feeling of memorializing is further strengthened as Atxaga writes of his childhood memories in Basque country, telling the story of figures such as “the Basque woodchopper” and famed boxer Paulino Uzcudun. He treats all of his subjects with an apparent and refreshing care, bestowing an air of respect for all the people, cultures, and landscapes he describes.

Nevada Days is not a light-hearted book, but there is still a warmth to it. As the novel illuminates the strange in American culture, it functions as a celebration of personal relationships and community, and of the interesting cast of characters Atxaga and his family meet in Reno. The appeal of the novel comes in the collage formed by all its juxtapositions, and in how capably the narrative jumps among topics and time periods, expertly evoking their atmospheres without any overshadowing the others.