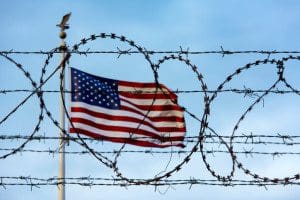 Three years ago, my essay “Shiftiness: The Border in Eight Cases” approached the border from eight different routes. The years since have only increased the urgency of dealing with the border in a humane and just way.

“The law constitutes a ‘we’ through an official story,” scholar Priscilla Wald wrote in her 1994 book, Constituting Americans: Cultural Anxiety and Narrative Form. But: “An official story of ‘a people’ invariably lags behind the seismic demographic changes and corresponding untold stories that ultimately compel each revision.”

These days, we’re immersed in the conflict that churns beneath the changing text.

When Donald Trump issued his Muslim ban a week after his inauguration, protestors poured into airports around the country. Federal courts issued injunctions, the Trump administration twice revised the ban, and the Supreme Court let it go into effect while it heard the case. Later, the Trump administration began blocking people from seeking asylum at official border points and taking the children of those who do manage to cross. Lawyers filed lawsuits. Protests bloomed. On July 4, sparing no symbolism, seven people dropped an “Abolish ICE” banner from the base of the Statue of Liberty.

Now, in Trump v. Hawaii, the Supreme Court has rubber-stamped the Muslim ban. My printed copy of Chief Justice John Roberts’ majority opinion is marked with angry notes. I was one of the people marching through SeaTac airport a year and a half ago, lifted by the “joy of disobedience,” and I’m one of the people now who’s spent mornings holding a handwritten sign in front of the Seattle ICE office.

In 2018, we know we’re living in history. I imagine a person like me, sitting at a desk one hundred years from now in whatever United States emerges from this catastrophe, reading Trump v. Hawaii. This reader, comfortable but conscientious, peers at the decision as if through a telescope. Distance can make everything smaller, especially if there’s no political and moral crisis bearing down on the reader to bring history to the fore as she sifts through the pages.

In August 2018, we are experiencing a genuine crisis—not just a crisis of intensified border-related brutality but also a crisis of sudden awareness and loss of meaning. Who are we? It’s a double question: who’s included, and what’s the nature of those of us who are? The border touches both sides of this question. Donald Trump so luxuriates in his contempt for the lives connected to the border that many of us who previously could escape or ignore the border—not just as a place but as an instrument of power—can hide no longer; many don’t want to anyway. Ignorance is complicity, and complicity ruins our souls.


But it might be different for the reader of the future. Maybe she feels all this doesn’t implicate her, and she can approach the Muslim ban case with the benefit of disconnect. For that reason, I think she’s the reader Chief Justice Roberts must be addressing in his majority opinion. I can’t imagine anyone else comprehending the future he depicts.

Throughout the opinion, Roberts plants inert words in a barren and depopulated landscape. No human wanders into his discussion—not one who’s alive and feels real to me. Not the individual plaintiffs, who are granted a two-sentence mention in his pages; not the family members blocked from joining spouses, parents, and children, and not Trump. There’s only the sterile figure of The President.

This figure, The President, has made some intemperate statements about Muslims. Yet Roberts isn’t much concerned with the comments “of a particular President.” He abandons the real person for the idea and shifts focus to “the authority of the Presidency itself,” to which the court must yield; distant “foreign nationals” are involved, even if those foreigners aren’t so distant that The President can’t make war in their countries.

“We express no view on the soundness of the policy,” Roberts writes in a tone of studied helplessness, concluding that “the entry suspension has a legitimate grounding in national security concerns, quite apart from any religious hostility.”

“If the court has plugged its ears,” as Lili Loofbourow, a staff writer at Slate, suggests, the ear-plugging isn’t passive. The court doesn’t just deny, erase, or overlook. Roberts’ opinion creates. His language architects a surreal world into existence—a world in which a sober federal agency, “in consultation” with others, has conducted a neutral, no-mention-of-religion analysis, identified a “public safety threat,” created a “baseline,” solicited information, weighed “distinct circumstances,” and created a new mechanism and new procedures—all for our protection.

This depiction covers tracks and preserves false innocence. It abets a hateful redrafting of the national “we” by pretending the hate is of no consequence and not at issue anyway. And our reader of the future may see this or not; she may see it in part but be shielded from the human toll because Chief Justice Roberts’ opinion makes no room for humans, or humanity.

So, let’s populate the landscape that Roberts has depopulated.

We can begin by turning to Justice Stephen Breyer’s dissent, where he opens the door—finally—to real people living now, starting with the story of a Yemeni girl with cerebral palsy, who was denied a visa. “The war had prevented her from receiving her medication, she could no longer move or speak,” Breyer writes, “and her doctors said she would not survive in Yemen.”

Then there are the bureaucrats drafted into applying the Muslim ban, including its supposed waivers. Breyer introduces us to the consular officer who denied the Yemeni girl’s waiver, then, after press attention, said she’d been planning to grant the waiver all along but had been awaiting her supervisor’s okay. Two more consular officers fill out the picture. One calls the waiver process “window dressing.” Another reportedly tells a person seeking a waiver, “Even for infants, we would need to see some evidence of a congenital heart defect or another medical issue of that degree of difficulty that…would likely lead to the child’s developmental harm or death.”

Further populating this landscape, is Justice Sonia Sotomayor’s dissent. She brings “The President” back to life as the bigot and nationalist that he is, walking the reader through his statements, his winks, and his Tweets. She does not pretend to not see or know. The Muslim ban “masquerades behind a façade of national-security concerns,” she writes, speaking not of “foreign nationals” but of “the pain and suffering [the ban] inflicts upon countless families and individuals,” which among its many facets includes the pain of being made an outsider.

Who are these countless families and individuals?

We can get a glimpses of them from filings in the case: grandparents blocked from meeting new grandchildren; children blocked from saying goodbye to ailing parents; people blocked from marrying each other after months of paperwork, waiting, and travel to a distant embassy. The filings overflow with their stories.

Why cast all these people out? What purpose can it serve, other than to make our country more exclusionary and more hierarchical?

Maybe this is the point, the goal, part of the entire project. For a new country is coming into being, one blossoming with the “seismic demographic changes” that Wald mentions—I can’t help but hope—and a more democratic life for all of us, everywhere.

But those who fear this country-to-be have been furiously scribbling a different official story. They’re editing out the traces of color, queerness, perceived foreignness, and equity for working people. We see this in the erasure of voting rights with an aggressive, active “colorblindness” akin to the willful ignorance of Trump v. Hawaii. We see it in moves to legislate and adjudicate people out of bathrooms, doctors’ offices, labor unions and collective workplace defense, out of their naturalized citizenship and even “legality.” This is not “law and order.” This is a reordering of the law that gives lie to that very rhetoric.

These reactionary editors have lots of people to write out of the story, and while they do, we can try our hand at drafting a narrative, too.

The last day of June, thousands of us in Seattle crammed onto the light rail, heading toward SeaTac again. We continued past the airport where we’d protested the Muslim ban after the inauguration and exited near the edge of Puget Sound. We walked down to the federal detention facility where the administration was imprisoning parents who were exercising their right to seek asylum—parents who had no idea, now, where their children were and what horrors they were suffering. These parents are real people, in the real world, but we couldn’t see them. That’s by design. The prison is a concrete building, but also a near-abstraction of Chief Justice Roberts’ national security bureaucracy meteoring to earth.

I don’t think I’ve ever chanted so loud. I—we—wanted the people locked inside to hear. I think we wanted them to know we see them as us, and need them. Without them, our “we” is degraded and vulnerable. Without them, we all are vulnerable.

We shouted lots of things, among them “Abolish ICE!” The chant points to both policy choices and a turn in our imagination, one that begins to take apart what, in his 2018 book Mistaken Identity: Race and Class in the Age of Trump, Asad Haider calls “the wall Trump hopes to build inside our heads.” Instead, we have to imagine into existence something new and yet unseen. I don’t know what this other world looks like. But it’s freer, less afraid, and much closer to the story we hope to share with the future.

One thought on “Coda, or a Ninth Case: Trump v. Hawaii”