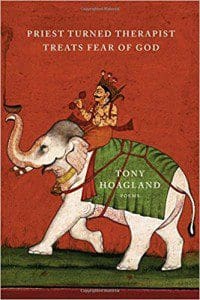 Tony Hoagland’s books probably have the most intriguing titles of any contemporary poet. The newest one, Priest Turned Therapist Treats Fear of God (74 pages; Graywolf Press) follows hard on Recent Changes in the Vernacular, from Tres Chicas Books, out late last year.

What Hoagland does better than any other poet is select the exact details to throw the cognitive dissonance inherent in contemporary American life into stark relief. Never sentimental, often fond, and always accurate, his lines cut through to the essence of experience. Yet they are leavened by tenderness and longing, a wry acceptance of the human condition. There is an elfin quality that is particular to Hoagland’s work that tempers the sharpness of his vision. And it’s impossible to read a book of his poems without laughing out loud at least once. Humor is his weapon of choice.

It’s hard to capture this in a few lines from a poem, because Hoagland’s technique layers the detail, stanza by stanza, to create the whole. He builds image after image, the furniture of the everyday x-rayed and deconstructed and reassembled, offset with the ever present, fragile beauty of the natural world, like a blossom on a chain link fence. But here are a few examples that can at least give a taste of the unique Hoagland flavor:

In Hollywood, fifty movie stars have pledged
not to use their swimming pools
until world thirst is ended.

and printed with the sentences
of a seething hot romance novel
called Summertime Nurses.

Season after season, while the tree was growing tall,
while it breathed and swayed among its brethren other trees
it wasn’t dreaming of becoming the delivery device

for a steamy bedroom episode
in which the small deft hands of someone named Brittany
“unbuttoned her jeans with feverish impatience.”

The rich man stands in the middle of the Everything Store
unable to decide what color socks to purchase.

The four-star general on the television says
“Bombing that city was a serious mistake,

but it taught me a lot about myself.”
Perhaps he should give a medal to his therapist.

These are just a few excerpts, but you get the idea: a wry tone, a genius for the appropriate detail, and an underlying sadness about the state of the world. Not all the poems take aim at our modern foibles. Some deal with awkward social situations, with lost friendship, with regret, with mortality. Of these, “A Moment in the Conversation,” “A Short History of Modern Art,” “Ten Questions for the New Age,” and “Marriage Song” stand out.

What’s most refreshing is how Hoagland can diagnose and explicate the symptoms of our current malaise without either ranting against or fully forgiving human beings for their complex, contradictory, and often hurtful ways. In the poem, “No Thank You,” Hoagland notes that “The average bookshelf / of a Psych major named James / at Cumberland Community College / yields all the wisdom / that was ever necessary…” yet we turn away from it. It’s not so much the turning away that the poem deplores, but the “liars who keep saying / we are looking / for solutions…”

Despite the liars, the constant clamor of the material world, Hoagland’s work always shows compassion for the self “inside the shell / pecking to get out.” And given his own recent months of serious illness, there are many scenes from the hospital that show his particular, unflinching compassion, as in “Nobility”:

The nurse’s aide says, “Did we have a bowel movement today,
Mr Mandela?”
and he looks at her with so much tolerance and calm
it is like the sea looking back at the land.

In the same way, the poems also offer us a glimpse of Hoagland’s self-forgiveness:

Because now that I am dying, I just go
forward like water, flowing around obstacles
and second thoughts, not getting snagged…

It’s unusual to find a voice at once so caustic and forgiving. He doesn’t let anyone off the hook, no hypocrisy goes unremarked, but the ultimate tone is a fondness for us all, for all the maddening misagash that comes with being human. This is nowhere better exemplified than in the poem “Theater Piece,” a send-up of diversity that may upset some people.

What’s new in this book, and sets it apart from the wonderful volumes that preceded it, is a hard-won tenderness from the flawed poet to himself, exemplified in poems such as “Entangle,” “Happy and Free,” “Better Than Expected,” “The Truth,” and my favorite of the new collection, “Into the Mystery,” that ends with these three couplets:

This life that rushes over everything,
like water or like wind, and wears it down until it shines.

Now you sit on the brick wall in the cloudy afternoon, and swing your legs,
happy because there has never been a word for this

as you continue moving through these days and years
where more and more the message is not to measure anything.

I hope the world vouchsafes us many more volumes from this uniquely talented poet.

3 thoughts on “A Blossom on a Chain Link Fence: ‘Priest Turned Therapist Treats Fear of God’ by Tony Hoagland”