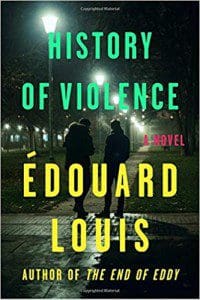 “I am hidden on the other side of the door, I listen, and she says that several hours after what the copy of the report I keep twice-folded in my drawer calls the attempted homicide, and which I call the same thing for lack of a better word, since no other term is more appropriate for what happened, which means I always have the anxious nagging feeling that my story, whether told by me or whomever else, begins with a falsehood, I left my apartment and went downstairs.”

From this initial winding sentence, the reader is plunged into, then relentlessly yet smoothly propelled through Édouard Louis’s autobiographical novel History of Violence (translated by Lorin Stein; 212 pages; FSG). The entire experience of reading the book is of baited breath, entrancing.

On Christmas Eve night, 2012, Louis meets a man, Reda, and invites him into his apartment. After some consensual sex, Reda becomes violent, attempts to strangle Louis, and rapes him at gunpoint. In the days that follow, Louis develops irrational obsessions and is choked by anger and violent urges, all while navigating a maze of unending legal and medical processes that threaten to finish the job Reda started.


The “she” Louis refers to in the above quote is his sister, Clara, whose relaying of these events to her husband frames the entire novel. Unknown to Clara, Louis, who is staying with his sister during his recovery, listens in from the next room, and it is his perspective we inhabit. Throughout Clara’s account, Louis often mentally corrects her and fills in the gaps in her knowledge for the reader. Clara isn’t, for example, privy to the gentler, more romantic moments of the night that preceded the assault, such as when Reda offers to give Louis a massage after they first enter Louis’s apartment. Clara also describes Louis’s family as being fully accepting when he came out to them, which Louis contradicts. Consequently, while Clara’s version of events is far from a fabrication, it is not altogether true, either. Louis has a similar experience when he reluctantly turns to the police and finds his personal truth also fractured by their line of questioning that “made me describe my night with Reda differently than I’d have chosen, and in the form that they imposed on my account, I no longer recognized the outlines of my own experience.” To a certain extent, Louis even loses the authority to define his trauma when he is directed to submit to a medical exam: “A medical team at the FEU could tell precisely whether I had been the victim of an attack or of attempted murder when I was being strangled, which would change everything . . . as for the forced penetration, they said that, too, would have to be proven: scientifically ….” At any turn, Louis may find his trauma fictionalized and delegitimized by family members or the state.

After having unwillingly ceded portions of his story to a sister he is not particularly close to, and who sometimes misunderstands crucial details, as well as giving it over to an illogical justice system he can’t control, it is no wonder Louis attempts to reclaim his experience through repetition of it: in the days following his assault, Louis finds himself compulsively telling his story to anyone willing to listen, confessing “this fantasy of utter shamelessness and self-exposure sustained me for weeks.”

History of Violence, then, is part of Louis’s process of reclaiming his story by examining, and therefore, understanding it. But for us, and perhaps for Louis, to truly understand his trauma, we must also understand his assailant’s—the two are inextricably linked. The men are, after all, both trapped in the currents of homophobia, toxic masculinity, and poverty; and both victims and perpetrators of violence (to varying degrees). When Louis catches Reda trying to steal his iPad from his apartment (which is when the horrors of the night begin), Clara reveals that as a kid growing up in an impoverished community in northern France, Louis regularly stole as well. In fact, the culture of their community implicitly fostered such crimes. Clara believes Louis’s father would “have been relieved because for him stealing a hammer would have turned Édouard into a man. It would have meant he was tough.” It is likely that Reda, a second-generation immigrant of Kabyle descent, grew up in a similar environment.

As a way of understanding Reda’s life, and therefore his own, Louis returns to storytelling. Early on in the night, when everything is still peaceful, Reda tells Louis, “I never read, my parents wished I was good at school, but it wasn’t my thing, I was always clowning around.” This meager confession becomes “one of the sentences around which I tried, later, to imagine Reda’s life, to construct meaning and explanations where there was only silence.” Seeking to construct meaning, Louis imagines a highly specific incident, in which a grade-school Reda gets up from his desk, moves to a window in the classroom, and theatrically threatens to jump out of it. He chooses to regard Reda as having been a fellow victim of the “myth of masculinity, a sort of ideal, an origin story of masculinity, a reference point against which boys would have to invent themselves,” and by doing so, strives to understand the causes of Reda’s violence.

Throughout the novel, Louis regularly, almost reflexively, tells such stories—he makes connections between Reda’s immigrant father’s desire for self-reinvention and his own, and envisions the tyrannical owner of the hostel Reda’s father stays at, as an elderly lady from Louis’s childhood who became embittered by the violence she had suffered. Of course, Louis realizes there are limits to his projections, and occasionally doubts them. As he curtly acknowledges while describing Reda’s imagined classroom stunt, “I’m transposing.” Most notably, when Louis argues his theory that Reda was adapting and improvising through the night, “that he, too, had lost his way, that he was at a loss,” Clara points out this theory’s unlikelihood: Reda had brought a gun.

Yet History of Violence asserts Louis’s conviction in the importance of weaving such complex and intimate narratives about Reda. This conviction does not stem from his wanting to convince us to love Reda or feel moved by him. Rather, Louis’s stories offer us valuable critiques of the systemic conditions that create people like Reda, and make us more aware of the cycle of violence that marginalized groups are especially vulnerable to. Toward the end of the novel, Louis offers himself as an example of someone who nearly perpetuates this cycle of violence. “I had become racist,” he says. For a few months following the assault, Louis develops a heightened sensitivity to the proximity of black, Arab, and Kabyle men. Louis, then, is the first person saved by his empathetic stories.

There is another story Louis tells himself that also saves him, albeit in a different manner: “I was sure that if I kept acting like a trauma victim, that’s what I’d become . . . what I needed was to pretend with all my might that I wasn’t traumatized, to tell myself I was all right, even if that was a lie.” Bravely, heartbreakingly, and with stark clarity, Édouard Louis uses the stories within the story of History of Violence to reconfigure his worldview, and in doing so, helps us to reconfigure ours.