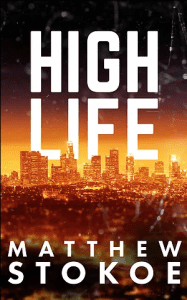 When Matthew Stokoe’s gritty noir High Life (380 pages; matthewstokoe.com) was published by noted indie Akashic Books in 2002, the book, which received very little coverage, managed to attract a fan base, thanks partly to Stokoe’s fearless depictions of upper-crust society at its worst. His novel eventually went out of print, but now that the rights to High Life are back with Stokoe, he has self-published his own edition of his hard-to-find book.

In High Life, Stokoe takes readers on a nocturnal tour of the seediest parts of late ‘90s Los Angeles, while gleefully subverting noir’s most ingrained tropes: there’s a private detective of sorts, but he’s a degenerate vice cop who more often acts as an obstacle to our main character, Jack; there’s a wealthy femme fatale living in a secluded mansion, but in a grim twist Jack might be more of a danger to her than the other way around.

Even so, Stokoe’s terse and evocative narration lets us know how much he appreciates the genre, especially the debt owed to the work of noir pioneer Raymond Chandler:

“My eyes felt charred and the cigarettes had eaten into my throat. I bought a cold coke from a machine outside a motel and chugged it until my eyes watered. Coke and damp night air, and the slowed pulse of the city around me. For that moment, for that snapshot, micron-thin slice of time, I was free of the past, free even of the present—just the sweet caustic singe in my mouth and the loose quietness of being up and alone when most people were asleep.”


As High Life opens, Jack is just one of the millions living on the periphery of Hollywood, working a thankless job at a doughnut shop while secretly hoping to land a gig as an Entertainment Tonight-style television host. When his estranged wife (herself a drug addict) turns up murdered, organs removed with surgical precision, her grisly death serves as a catalyst for Jack to hit the streets and search for clues as to her killer’s identity––as well as quit his day job and begin to pursue his dreams of stardom.

The drive for celebrity quickly takes precedent, however, and after his friend Rex persuades him to take a stint as a male escort for the rich and famous of Beverly Hills, Jack more or less drops his amateur investigation. He rarely looks back on his journey to “lights, camera, action,” even as each inner circle of fame he achieves introduces new and more depraved behavior from Los Angeles’ wealthiest denizens. By the time he attends an Alice in Wonderland-themed party at the Bradbury Building (the iconic L.A. locale from the end of Blade Runner), the metaphor is clear: Jack’s lust for “the steamroller exposure necessary to become part of [people’s] desires” will send him tumbling down a rabbit hole to a place where traditional morality no longer seems relevant.

“I woke thinking about Daryl Hannah, about how her mornings must be. How she’d lie on a king-size bed in a pure white room the size of a tennis court with sunlight cutting swaths across the carpet. And just a short distance beyond the floor-to-ceiling windows, a matter of yards perhaps, the sea would roll under blue sky and fat white clouds. The maid would come in with a light breakfast of coffee and croissants and the aroma of freshly roasted beans and the delicate pastry would mix with the ocean salt air and just that, just those three simple smells and the ocean breeze against your skin would remind you that you were a god.”

Although the idea of Hollywood using up and ultimately discarding the wide-eyed souls who head there seeking fortune and glory has been a noir standard since at least Sunset Boulevard in 1950, High Life is perhaps worth revisiting in the wake of the industry’s numerous sexual harassment accusations, as well as the NXIVM cult and its alleged involvement in human trafficking. Stokoe offers a glimpse of an industry where backroom power brokers indulge their most lurid predilections, and those on the lower rungs of society—drug addicts, sex workers, and the homeless—are too often the victims of horrific violence.

Jack, while far from being a likable protagonist, does hold up a mirror to a certain part of our culture: the many who share his utter obsession with obtaining wealth, status, and media coverage, and his lack of compassion for anyone who is hurt along the way, no matter if they’re a lover or friend. Blackmail and murder become part and parcel of Jack’s world as he struggles to keep his footing on the slenderest ledge of celebrity he’s managed to obtain: “The taste of the high life I’d had made it impossible for me to give up the chance at becoming someone special without a fight.”

Not surprisingly, the novel’s graphic content ensures it may put off readers unfamiliar with transgressive literature, though it should be said this is a label Stokoe—who cites Hubert Selby Jr.’s Last Exit to Brooklyn as a major influence—actively resists. “More and more I’m coming to think that labeling certain writers as transgressive, or ‘outside traditional writing,’ is a construct perpetrated by reviewers and editors,” he said in an interview with Full Stop. “I really believe that the reading public is far more accepting of the so-called extremes in literature than the gatekeepers of taste give them credit for. In fact I think a good portion of readers actually want the extremes…For me, the violence and sex were necessary to tell the stories I wanted to tell.”

When Jack finally achieves an on-camera role as a presenter on a Hollywood chat show, his success brings him closer to discovering the identity of the mysterious, silver-haired surgeon whose sleek black Jaguar patrols the Hollywood Strip in search of hustlers and vagrants to operate on, and who may have been responsible for his ex-wife’s murder. Along the way, Stokoe ratchets up the Grand Guignol to nearly unbearable levels—every ghastly detail hammering home the author’s indignation for the dehumanizing culture that encourages people to idolize stardom above all else.

Fortunately, even through the thorny tangle of Jack’s increasingly emotionless narration, Stokoe’s empathy for those lost along the way still comes through: there’s Jack’s friend Rex, who becomes an empty shell after a drug-fueled road accident leaves a small child dead (“We were in the same room, but he was million miles away,” Jack observes. “At that moment I knew I could spend the rest of my life trying to reconnect and I’d never do it. The guy was gone”); and Lorn, Jack’s co-host, whose disciplined work ethic and pragmatic view of Hollywood can’t save her from the harm that befalls everyone in Jack’s orbit. These lost souls are just a few whom Jack sacrifices at the altar of fame. Perhaps most chilling of all is Jack’s epiphany near the end, as he pauses to survey the physical and spiritual carnage he’s wrought. It’s a warning of sorts that Stokoe leaves with us: “I’m not that different from a lot of people.”