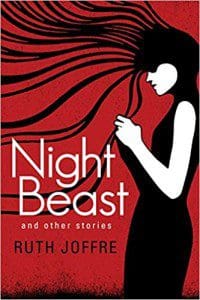 “I think part of me has always believed love should be like this — painful and hidden, only making itself known when you least expect it and are unprepared for the damage it can do,” confesses Gemma in the titular story of Ruth Joffre’s Night Beast and Other Stories (190 pages; Grove Press). Many of the characters in this collection share Gemma’s belief, which is perhaps why they ultimately resign themselves to finding comfort in a lack of fulfillment, to being abandoned, to having their affections go unreciprocated — after all, love not only must be, but should be like this, shouldn’t it?

Fiona, the protagonist of the collection’s opener, “Nitrate Nocturnes,” seems to believe so. Like everyone else in her world, Fiona has a timer embedded in her wrist that ticks down the seconds until she meets her “soul mate.” When her clock hits zero, however, the timer of her supposed soul mate Marianne is still running. Rather than express heartbreak or even confusion, Fiona knows she will wait for Marianne. She “accepted this future like she accepted the premise of a film with no color and no audio,” Joffre writes.

“Safekeeping” explores similar themes by examining a scientist who lives in a war-time shelter built by her lover as she yearns for his return. By the story’s conclusion, she has almost numbly come to terms with her fate: “She understood now that she would die in this safe house. If not of old age, then of the ceiling caving in or the pipes bursting or a gas leak or some other fault of technology or mechanics. This apartment would keep her alive for as long as it could . . . And when that happens she will know that she was loved.”


Despite the collection’s exploration of various genres—from magical realism to science-fiction—and varied points-of-view (including that of an immigrant Chinese boy and a homeless girl), the book instills a single feeling of cold, detached melancholy as we repeatedly glimpse the many shapes and terrible costs of these characters’ “painful and hidden” love. And it is indeed a glimpse Joffre oftentimes provides, depriving us of insight into her characters’ interiority at what seems like crucial moments.

Though romantic relationships are only one part of our lives, Night Beast and Other Stories shows how they can overwhelm our existence in a way few other things can. Fiona considers the length of her wait for her soul mate “the single most essential thing about her,” and when she admits her obsession to her temporary boyfriend, Marcus, he tells her, “This is unhealthy. You have to keep living your life.” Marcus, however, has not gorged on the media’s depictions of love in the way women like Fiona have, so he is spared from developing that insatiable, crippling hunger for love. Indeed, Fiona studies film in university and when viewing a movie with Marianne thinks to herself, “she should’ve known this already, should’ve known that desire was a spectacle and that she would spend all her time with Marianne contorting herself into the woman she thought her soul mate wanted.”

This subtle theme of consumption and performance is weaved into many of the stories, most notably the collection’s penultimate piece, “Weekend,” in which a pair of avant-garde actors who have been working together for fifteen years confuse their married characters’ identities with their own. Intriguingly, “Weekend” reveals a strange truth about an earlier piece in the collection, as the television director in the story describes a new project in the works: “a gripping character study of a woman locked in a futuristic safe house while the rest of the world destroys itself (the lead actress had been left in an old bomb shelter for three weeks to prepare for the part).”

With this revelation in mind, “Safekeeping” becomes a study on the confusion between sincerity and performance, reality and fantasy. I realized I read “Safekeeping” the way I’ve consumed countless actual television shows — knowing full well it is a fictitious story, yet still feeling shocked at the realization that the tragedy of the protagonist’s life is manufactured. Joffre seems to argue that it is television shows such as the one the protagonist prepares for in “Safekeeping” that encourage viewers to accept such a “painful and hidden” love.

Ironically, it is in “Safekeeping” that our sometimes harmful, sometimes redemptive relationship with film and other forms of art is most movingly captured. At times, glitches appear in the narrator’s monitors , causing holograms, including one of her lover, to haunt the safe house. Whenever he appears, “she was so grateful for this small kindness that she crawled inside the projection’s ghostly outline and slept there, heart to heart.”

And isn’t that what we do when we read books and watch movies? Make ourselves humble and raw and vulnerable so we can crawl inside the art and sleep “heart to heart” with it? If so, Night Beast and Other Stories serves as a reminder that we must carefully choose what art we fall in love with.