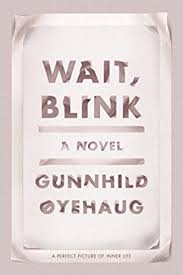 A jolt of elation always strikes when coming across a passage that perfectly captures one’s private thoughts, and with Gunnhild Øyehaug’s novel Wait, Blink: A Perfect Picture of Inner Life (translated by Kari Dickinson; 288 pages; FSG), I frequently found myself electrified. Page after page of passages artfully dissect our most subliminal mental processes. Utilizing the character of Sigrid and her sense of detachment in front of the computer screen, the author makes a fluid allusion to the novel’s subtitle: “She identifies with the cursor! Waiting, blinking, and without any real existence in the world, just on and off between blink and blink. Is this her light in the world?” Øyehaug’s insight echoes what author and psychologist Maria Konnikova said about fiction writers: “Their understanding of the human mind is so far beyond where we’ve been able to get with psychology as a science.”

The novel is Øyehaug’s first to be published in English. Translator Kari Dickinson’s discerning work remarkably captures the unique beauty of the novel’s syntax, powerfully relating a story so vivid it’s little surprise it made its way to the big screen. (It was adapted into the 2010 Norwegian film Women in Oversized Men’s Shirts, its title a reference to Sigrid’s feminist antipathy toward wearing a male partner’s shirt.) The strength of Øyehaug’s prose is admirably unswerving; the evocative opening paragraph gives readers a taste of what’s to come:

The precision of the prose is contrasted by a plot full of variables. The novel threads together the lives of several different individuals who have fleeting connections to one another, incorporating scattered cinematic and literary parallels as it does so, analyzing their interior relationships through the lens of movies such as Kill Bill and Lost in Translation, as well as works of literature such as Dante’s Inferno. Sigrid is a literature student at the University of Bergen and is often “falling into a kind of trance which meant that she’d forgotten she was still part of the world’s everyday dance.” Consequently, she tends to develop attachments with nature rather people.

That is, until she meets Kåre Tryle, twenty years her senior and with whom she develops a complex romance. Kåre’s ex-girlfriend, Wanda, feels her relationship with Kåre mirrors Uma Thurman’s vengeful quest in Kill Bill: “the fact that it was a possibility, now demonstrating on film, that someone could hurt someone else as much as Bill hurt the Bride.” And to the south of Bergen, in Denmark, is Linnea, a director scouting locations for a film that will never be produced. She is “small and slight, and often walks with her head down, as though she were a small bell-like flower who wanted to keep things to herself.”

Øyehaug’s characters are as nuanced as her fine-tuned language, which makes the most of its cultural references while radiating the uniqueness of a novel that feels profound, mysterious, and witty all at once.