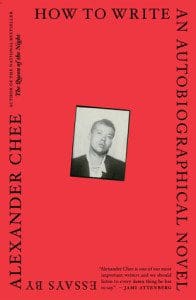 In his first nonfiction collection, award-winning novelist, poet, and journalist Alexander Chee offers a reflective look at his life in How to Write an Autobiographical Novel (288 pages; Mariner Books). From his time in Mexico learning high school-level Spanish to his undergrad days at Wesleyan, and later the Iowa Writer’s Workshop, as well as his AIDs activism in San Francisco, the book is a well-orchestrated chronicle of a life well-lived.

Growing up as a Korean American, Chee often struggled with his identity and felt awkward in public, as when his long hair caused him to be mistaken as a girl, or when a stylist nonchalantly remarked he could pass for white. But Chee stood out in other ways: in the essay “The Curse,” he was the first among his classmates to achieve fluency in Spanish; and in “The Querent,” he was the only one to pass a test for psychic abilities. These were the times when he was visible in the “right” ways, and Chee conveys the validation he felt when he was finally recognized for his individual strengths rather than his outward appearance.


Chee’s realizations read as personal, yet universally contextualized. His essays form a triumphant and evocative narrative about youth and a hankering for the power found in beauty. One recalls philosopher Benedetto Croce’s notion of aesthetics while reading “Girl,” in which Chee portrays the elation of taking on a new identity, that of a woman. Aesthetics, as Croce points out, are ascendant; and although aesthetics are both the highest and the most challenging domain of human behavior, it is also the most base form, the one from which all others derive:

This beauty I find when I put on drag, then: it is made up of this talismans of power, a balancing act of at least two cultures, an act I’ve engaged in my whole life, here on the fulcrum I make of my face. That night I want this beauty to last because it seems more powerful that any beauty I’ve had before. Being pretty like this is stronger than any drug I’ve ever tried.

Chee graciously shares advice from his beloved professors at Iowa, such as Deborah Eisenberg and Frank Conroy, as well as Annie Dillard, who taught him at Wesleyan. Each of these mentors offers sound reminders that talent cannot be nurtured without hard work, making the book a helpful guide for young writers: “‘I started with writers more talented than me,’ Annie Dillard had said in the class I took from college. ‘And they’re not writing anymore, I am.’”

Chee also narrates his writerly journey through the hobby of gardening in “The Rosary.” Using gardening as a metaphor for his development under his teachers, he concludes, “I was not their gardener. They were mine.” The parallels of how a garden can initially be a “disaster in need of reckoning,” and how Chee eventually turned it into a blossoming rose garden, helped him visualize his own success. In chronicling his personal and creative struggles, Chee produces a cathartic primer for treading through the challenges of life with the same grace he displays as a writer.