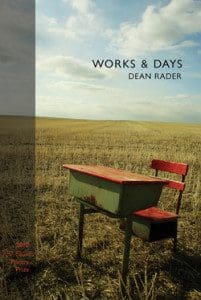 Diligent readers of ZYZZYVA will have noticed Dean Rader’s dazzling poems in numerous issues of the journal, most recently in our Art & Resistance-themed Issue 111. We’re pleased to announce that Rader will also be leading a ZYZZYVA Writer’s Workshop in Poetry on August 18th, which is currently accepting submissions. The deadline to enter is June 18th –– so do not delay! The poet recently took time out of his busy schedule, which includes teaching writing at the University of San Francisco, to discuss the merits of the Workshop format, writing hurdles he’s overcome, recent poetry collections he’s read, and much more.

ZYZZYVA: Do you feel the communal aspect of a writing workshop, in which participants receive critical feedback from both the instructor and other attendees, can help improve the quality of a poem – or is it more about the discussion a poem can generate among the group?

Dean Rader: This is my professor (and my poet) answer but both things are valuable—especially in a one-day workshop. As a full-time professor and as someone who reads a lot of poems for contests and publication, I feel like I know what elements make a poem really sing. I also think it is important for writers to get feedback from other writers who are engaged in a common pursuit. One of the most critical things for any writer is learning what advice to take and what advice to ignore—these kinds of workshops are great for this.

One last thing—immersive workshops do both short term and long term work. There are immediate benefits that might make the poem under discussion stronger, but conversations and techniques and strategies learned in the workshop have long lasting benefits that can make future poems stronger than they might have otherwise been.

Z: In your collaboration with fellow poet Simone Muench in ZYZZYVA No. 101, known as the Frankenstein Sonnets, the two of you devised a new form for constructing poetry, one that saw you both piecing together a poem stanza by stanza. Do you ever instruct your students to experiment or devise new forms like this to break them out of their usual patterns?


DR: Oh yes. It’s a regular assignment in all of my writing classes. In fact, I have even begun assigning the very same system Simone and I used for our own poems. Often, they result in some of the best work of the semester because most people are capable of writing two interesting stanzas. One of the hardest things is writing a flawless poem from beginning to end. But, without the pressure of having to write a perfect poem, you would be amazed at how creative people get. Plus, you never want to let your collaborator down. Greatness rises to the surface…

Z: If a student comes to you and says, “This poem I wrote is bad,” what’s typically your first response?

DR: I usually quote this great passage from Thomas Mann: “A writer is someone for whom writing is more difficult than it is for other people.”

Most of our poems begin badly. There is nothing wrong with writing a bad poem. I have written many. I have written bad poems this month. Typically, I ask my student if there is a way to save the poem, and we sometimes look for one line or one image or one moment that contains the energy or the edge of the poem. I ask the student to cut everything but that one part and start from there.

But, beyond that, I also believe that we sometimes have to write a series of failed poems in order to write the one that succeeds. What if the successful poem can only have been written because of multiple failures?

As I suggest above, poetry is about playing the long game.

Z: Early in your writing career, was there a specific hurdle you were able to jump over, whether it was a way to unlock your creativity or simply begin viewing yourself as a poet? How did you overcome it?

DR: That is a great question. The answer is yes, absolutely. Probably two main hurdles.

The first was simply wondering if I have what it takes, if I have the talent and the commitment to devote my life (or at least the professional part of my life) to poetry. There are two components of that fear—talent and dedication. I remember Edward Hirsch telling me one time that he came to a realization at one point in his career that he would rather fail at poetry than succeed at anything else. I too came to that realization, perhaps a little later than some, but it made all the difference in my work. There are other poets out there with more natural gifts than I have—Terrance Hayes is a better poet than I am. Jorie Graham – way better. W. S. Merwin – so much better it’s like Kevin Durant and my 6-year old son playing horse. But, I’m playing the long game – I believe my best poems are to come. I’m committed to being courageous about my work.

The second hurdle was believing in that choice—believing that if I gave myself to poetry that poetry would return that gift. Like most poets, early on I was confused about my voice and/or what I wanted my voice to be. I both wanted to sound like poets I admire and did not want to sound like poets I admire. Somehow, that involved letting go of past voices of restrictive ideas about what a poem should look like or sound like or do and let my poems embody poetry’s flexibility, its nimbleness, its openness.

Z: What are some poetry collections you’ve recently read and would whole-heartedly recommend to prospective Workshop attendees?

For me, the most impressive collection of the last decade or so is Lighthead by Terrance Hayes. A very different book but one which I like and I think students will like is Bright Dead Things by Ada Limón. King Me by Roger Reeves is great, as is Barbie Chang by Victoria Chang. If folks have not read W. S. Merwin’s The Lice, now is a great time to do so. Copper Canyon just issued a 50th anniversary edition of it – that book changed contemporary poetry. Brenda Hillman’s Seasonal Works with Letters on Fire is a must. I also recommend a book many people may not know – Simone Muench’s Lampblack with Ash. Lastly, if folks are interested in the ways in which poems can take on controversial political issues, I urge readers to check out Bullets into Bells: Poets & Citizens Respond to Gun Violence—with poems by Juan Felipe Herrera, Rita Dove, Billy Collins, Danez Smith, Robert Hass, Natalie Diaz, Dana Levin, Yusef Komunyaaka, Jane Hirshfield, Martin Espada and 40 others. Each poem is paired with responses by survivors of mass shootings, parents of children killed in shootings, and other activists. Often, contemporary poetry can feel like it is facing inward, but these are all poems looking outward.