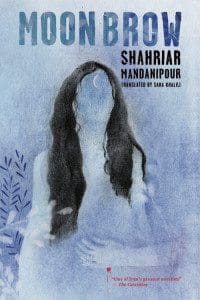 A quick summary of Moon Brow (464 pages; Restless Books; translated by Sara Khalili), Shahriar Mandanipour’s newest novel to be translated into English, reads like the stuff of fable. Our main character, Amir Yamini, returns from the Iran-Iraq War saddled with amnesia and bereft of his left arm. Ostracized from his family and community as a head case, crippled by shrapnel, he is repeatedly haunted by the image and piecemeal memories of a beloved. With the help of his sister, Reyhaneh, he searches Tehran for signs of his past, and potentially for the love he no longer recalls, save only in his dreams. In a brazen attempt to rediscover a portion, both imaginative and literal, of what was lost, his journey eventually leads him back to the battlefield where his arm was severed.

From a lesser writer, one might expect numerous pinholes to develop within this complex and twisting storyline, not to mention a sentimentality found in gone-off-to-war pseudo heroic narratives. Instead, Mandanipour treats us to a new kind of story by filtering his novel through the dual personas of the angel of virtue and the angel of sin perched on Amir’s shoulders. Not only that, but Amir himself, at times, converses with each scribe, encouraging one or reprimanding the other. (“Write on my right shoulder that I like the old man. Not on my left, you jerk! The old man has memories of my childhood.”) We’re often shuttled smoothly from one point of view to another, and to yet another, as the past is recast—not so much as fact or history, but as a feeling or moment, transitory and unsettled.

It’s true that much energy is devoted to the playfulness between our sometimes-capricious narrators and Amir and their interpretation of events. (Not to mention the atmosphere of playfulness and carefreeness found in Amir’s playboy lifestyle pre-war, which others relate to him.) Yet Moon Brow is indeed a war story, and takes deliberate steps in describing the horrors of battle


By the time he makes his way to the soldiers, the pleas and howls of three of them have stopped. Like a snake, an intestine has slithered under a rock. A lacerated red mask on a face. One man, sitting on his knees, his forehead on the ground, silently trembles. His uniform is soaked with blood. Is it his blood or another soldier’s?

Amir’s memories of the violence of the front are almost hallucinogenic, a consequence both of the precise language used to conjure such awfulness as well as the already established shifting narrative. The sometimes-brief recollections that spool into one another continuously in an almost stream-of-consciousness manner heighten the drama. Images of war and beauty exist in close proximity, and the sudden turn from idyllic to grotesque mirrors the precariousness of human life in wartime.

To truly appreciate Moon Brow one must embrace a mindset that maintains the world is not black and white, but in fact gray. Amir’s world is one where something can both be and not be in the same breath:

This is complicated, enjoyably, by the ongoing disagreements between the raconteur scribes. “The account on his left shoulder is faulty,” says the scribe on Amir’s right shoulder. “Not that it is untrue, but it has been written from Abu-Yahya’s perspective. This should not be done.” We inhabit the area between the two, listening to both sides, trying to piece together, alongside Amir, an accurate account of his life before the war. After a while, a certain vertigo permeates the text.

It’s quite remarkable, and should be counted as a tremendous success, then that Shahriar Mandanipour sustains this tightrope act for well over 400 pages, both rewarding and delighting those who make the journey with Amir.