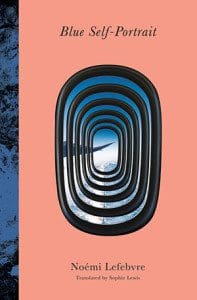 Air travel has long been depicted in fiction as a venue for potential transition and transformation (even if only metaphorical); we take off from one place and land in another, and there is no guarantee we will be the same person upon our arrival—no telling what chance encounter may occur on our flight or what dreamy epiphany those long hours might inspire.

Blue Self–Portrait (143 pages; translated by Sophia Lewis; Transit Books), a 2009 first novel by French author Noémi Lefebvre, occupies this same liminal space; the entire book unfolds during a plane trip from Berlin to Paris, as our unnamed narrator obsesses over a brief romantic encounter with a German pianist, who is haunted by the Arnold Schoenberg painting from which the book derives its name.

Not unlike her characters, Lefevbre studied music, as well as political science; despite the dry image her academic credentials might conjure, Lefebvre displays a mordant wit. Her narrator is burdened with the kind of all–consuming self–consciousness and existential anxiety that have become hallmarks of a certain type of intellectual. Lefebvre utilizes page after page to pile on her narrator’s neurosis to frequent comedic effect: a trip to a salon means “…letting myself be shampooed, then snipped and styled and sent to the dryer to wait under that hood and finished off with hair spray, it destroys me every time”; her restless leg syndrome is “a long–standing problem that I’ve never managed to fix and which damages my social position, tarnishes my public image, and makes me unfit for all cultural integration.”


Lefevbre finds clever ways to disrupt her narrator’s solipsism. Any traveler knows that more often than not one’s agenda for the flight––whether it’s turning over the minutia of an ill–fated romance or making progress in a good book––can be dashed by the inconvenient realities of air flight: the screaming children or the choppy air. Lefebvre does well in reminding us her narrator is first and foremost a body at the mercy of a high-altitude cabin: “I looked for another tissue to mop up my capital and dorsal dripping, in other words my general dripping due to poor adaptation to the pressurized environment.” The narrator’s sister is along for the journey, her presence a welcome addition that serves to retrieve the narrator’s head from the clouds at opportune moments. Despite similarities in education and demeanor, the sister stands in frequent contrast to our protagonist: “You are not intellect alone,” she advises at one point, “you have to relax.”

In the end, the narrator seems to conclude that the defining difference between her sister and herself is her own suspicion in the very notion of a collective happiness—the idea that if each of us simply do our part then society as a whole will function for the betterment of all. “Collective happiness, in my sister’s case,” she explains, “depends fundamentally on universal niceness.” If the narrator is not dubious of the entire enterprise of striving for collective happiness, she is at minimum certain her ingrained anti–social behavior means she has no place in the endeavor: “…I mean I serve myself without restraint or consideration, I take what interests me and use it to fill my own void, my void is all I care about.”

Blue Self–Portrait contains thoughtful ruminations on classical music composition, the Third Reich’s persecution of the arts, and the impact of globalism on culture, among other far–reaching topics. Contemporary Berlin proves a rich setting, allowing Lefebvre to contrast the city’s towering artistic achievements against the lingering memory of fascism and the pervasive presence of consumer capitalism. (The narrator can’t help but remark on the ironies of her meeting with a pianist trained in classical German music to view an American film at the Sony Center movie theater: “composition and consumption fundamentally incompatible.”) Given how immersed in the notion of creativity and art the novel is, it is little wonder that at times Blue Self–Portrait takes on some meta qualities, such as when the pianist of our narrator’s affection muses, “…composing a piece with the stole aim of pleasing my audience was not my intention either, would have been impossible,” perhaps a reference to Lefebvre and the ways in which her novel categorically ignores the traditions of the form––resisting the straight narrative path from A to B, such as an airplane must follow.

“Flying only makes you melancholy,” the narrator’s sister tells her as their plane nears its descent, “…from the moment we reach the airport you’ll start to feel different and as though you’re glowing.” At times we long for this state of renewal at the end of a long journey, a revitalization upon arriving at our destination, no matter the wear-and-tear to get there. This kind of rebirth isn’t always possible, of course––some voyages leave us irrevocably altered and not for the better. But in Blue Self–Portrait there is at least the hope for change. “I’ll take some time at home quietly putting my pieces back,” our narrator assures her sister. “I’ll eat well and sleep well, I’ll take outdoor walks, that’s what I’ll do…I too shall be radiant.” We want to believe this is possible for our high-strung narrator, not only because we sense she deserves a reprieve from her constant self-introspection (and persecution), but because in her we see a reflection of our own desires.