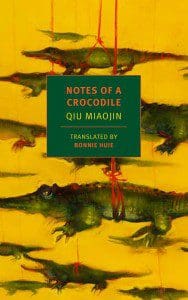 In 1994, the Taiwanese writer Qiu Miaojin published Notes of a Crocodile (NYRB Classics; 254 pages), a masterwork of fiction that plumbs same-sex desire while satirizing homophobic society; a year later, she killed herself. An English translation by Bonnie Huie captures the urgent, confessional voice of a lesbian struggling to live with honesty and courage in a society that holds her in its thrall.

The novel’s anonymous narrator, known only by the nonsense nickname “Lazi,” reconstructs from old notebooks and deteriorating memories an account of her time as a college student at an elite university in Taipei in the late ’80s. Her narrative largely revolves around her romantic relationships with women, as well as the same-sex relationships she witnesses among her dearest friends. Punctuating Lazi’s journal entries are chapters from a parable about a green-skinned creature called Crocodile who, despite wearing a “human suit” to blend in with the rest of society, reports on her existence to the media out of a desire for fellowship and acceptance. This announcement touches off a media frenzy that manufactures pseudo-knowledge of “crocodile culture,” as well as clashing political movements to either eradicate or confine all crocodiles. By turns droll and horrific, the parable illustrates how a voyeuristic media can turn lesbian culture into an object for fantasy, mimicry, and oppression.

As for Lazi—what does she see on TV? Reports on lesbians, like reports on crocodiles. Qiu equips her narrator with an acute understanding of the social forces dictating who a person is and what is possible for her. Lazi describes her home as “a credit-card bill footed by Nationalist Party voters” and her peers as “manufactured and canned, raised for the sole purpose of taking tests and making money.” As for herself, she is no less scathing in her critique. She acknowledges that when she enters college she is “pure carrion inside.”


Who will she be on graduation day? Lazi hopes to achieve self-actualization, to act upon her fundamental love for women. She begins college believing she has her innate prototype of a woman, and that she will fall in love with the woman who most resembles her type. Achieving reciprocated love with such a woman will not only bring about romantic fulfillment, but the realization of her true self.

Lazi finds her ideal in Shui Ling, a classmate about whom she writes: “She accepted me, which amounted to negating my negation of myself.” Lazi’s love is doomed the moment it begins. Same-sex love is taboo. What is possible for Lazi is not what is possible for society, so her project for self-actualization can only result in failure. She must deny her personal truth or experience the total fragmentation of her identity.

She chooses the latter, entering into a state of denial and self-harm. Her queer friend Chu Kuang, meanwhile, succumbs to fragmentation after his failed attempt to kill his lover. “It was a gradual process,” the lover tells Lazi, “but one by one, each personality split off into its own domain … Now there isn’t one that dominates anymore, and he switches depending on who he’s talking to.”

With painful, wrenching detail, Qiu maps out a world that has no use for Lazi and her friends’ perfect queer selves, but does want what their bodies offer—strong limbs for labor, supple minds for media-consumption, and healthy sex organs for reproduction. Exploited in this way, a terrible question haunts Lazi and her friends: do they stick it out in “normal” society, or do they kill themselves?

Acts of cruelty abound. “I’m going to have to learn to be crueler if I’m to become the master of my own fate,” Lazi writes. But this cruelty is less about self-hatred than it is hatred for inauthenticity. Lazi seeks to destroy or else dishonor her socially put-upon identities—the diploma she lets drop in the mud, the ID cards she loses and then ironically receives in the mail. When she says then that cruelty and mercy are “one in the same” and “only natural,” she is acknowledging that acts of identity-negation are what she believes allow her to go on. She self-burns but does not kill herself. She fucks men but does not fall in love. And her decision to turn her diaries into a bestseller about her lesbian attachments—identifying her lovers by name while using an alias for herself—is perhaps her cruelest act (though in Lazi’s view, merciful, too).

As graduation draws near, Lazi reminds her queer best friend of his promise to kill himself with her. But the friend, Meng Sheng, isn’t up for that anymore. “You have to get over this whole idea of me!” As he continues to curse her, banging his head against a payphone, Lazi runs from the scene. She recounts:

… My head was spinning. I scrambled up the brick wall, scraping my hands on the shards of glass littered on top of it. The full moon came into view as I made it over, and just then, I was reminded of how in Truffaut’s The 400 Blows, the boy breaks out of prison and runs to the sea, and that final close-up of the expression on his face.
(Freeze frame.)

That boy, that actor, as he raced to the ocean, was he relating his experience, his performance to another moment, another movie, so his life could feel all the more validated and real? Qiu Miaojin, this exceptional writer, shows that Lazi is beholden not just to the gaze of heterosexuals, but to her relentless, self-critiquing one, too. Both performer and audience, the viewed and the viewer, Lazi is trapped by her fascination with herself. Even moments of seeming liberation, like the one at the glass-strewn wall, circle back to the narrator-director’s fantasy of the camera zoom, the image dissolving.