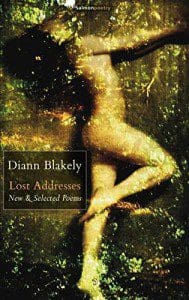 “My fear is the common one, that her poetry should be lost,’’ Rodney Jones writes in the introduction to Lost Addresses: New and Selected Poems (100 pages; Salmon Poetry), a posthumously released collection by his friend and fellow Southerner, Diann Blakely.

“There are ample reasons for a poet to be neglected, temporarily submerged in a trend, or permanently effaced, for poetry is a cold media and the music that the claim of poetry rests on may not always be acknowledged,’’ he adds. “This book is proof against forgetting.”

Indeed. Blakely, who died in 2014, had a light that burned brightly, but the questionable benefits of self-promotion, let alone branding, were alien to her spirit. (In addition to this volume, her longstanding project, Rain In Our Door: Duets With Robert Johnson, is to be published by White Pine Press and another collection, Each Fugitive Moment; Essays, Memoirs and Elegies on Lynda Hull, is forthcoming from MadHat Press.)

Her verse unites respect for form and for precursors like Eliot and Plath with down-home tributes to high and low culture, from Sid Vicious to Foucault. She gives us imagined renderings of the real life meetings between Helen Keller and Mark Twain. In “The Story of Their Lives,’’ she writes:

With other lives and voices, it’s time to loose
This story, to let Helen float away
From Westport, childhood, Los Angeles: you choose


It’s her characteristic elegiac mode—as accepting of grief for the death of Princess Diana as for that of a close friend. Recollecting an exchange with an insensitive lover, she writes:

The two of you had nothing more in common
Than a nickname, which failed to stop my tears.

I’m free to sing,
To mourn and yet take joy, to bow in church
And ask that words, transformed by prayer, can stanch
A child’s tears, or a people’s.

As Jones notes: “She wrote more effectively in the high register than any Southern poet of her generation.’’ Close rhymes that sometimes put one in mind of Gerard Manley Hopkins, and attention to the soil she grew up in, half-loving and half-hating, were the seeds of this underappreciated lyricist.

In “History,’’ she addresses her legacy, head-on, but with characteristic irony.

It’s blood and generals who were the cause,
Shadows we study for school. In Nashville, lines
Of a Civil War battle are marked, our heroes
The losers….

The South’s hurried
And richer now: its ranch-house Taras display
Gilt-framed ancestors and silver hidden
When the Yankees came, or bought at garage sales.
History is bunk. But who’d refute that woman
Last night, sashaying toward the bar’s exit
In cowboy boots to drawl her proclamation?
“You can write your own epitaph, baby,
I’m outta here – comprendo? – I’m history.”

Making sense of that history, whether it’s through summoning up of Charlotte Bronte’s gloves, Mary Jane Kelley, Jack the Ripper’s last victim, or the legendary bluesman Robert Johnson, who may or may not have sold his soul to the Devil at a crossroads, she hungers for what’s real, striking mercilessly at cant that’s in the way. “My friend, I hope your soul, unfettered, flies,’’ she writes in “Jailbird,’’ an elegy to a friend with “so many outstanding warrants/On your head that you’d be manacled/As soon as you stepped of the plane. O exile. /O vodka, Oxycontin, Ambien/And benzos too. I knew they’d cage you in.”

In the coda to what seems like might be the unremarkable subject of a college reunion, she lends a distinctive touch: “Farewell, my lovelies. ‘I’ll call, or write.’’ Let’s hope that Jones is right and that this collection, and the forthcoming piece on Johnson, gets this poet the attention her work so richly deserves. 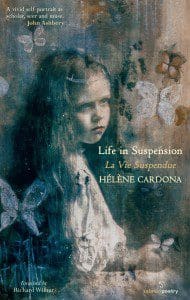 Hélène Cardona’s new collection, Life in Suspension—La Vie Suspendo, (108 pages; Salmon Poetry), also commands respect. Richard Wilbur’s introduction tells us the “poems were conceived in English, then rendered into French.’’ I’m not fluent enough in French to judge their exactitude, but it’s hard to argue with Wilbur’s judgment that “for such a many-languaged tongue as hers, the ‘translations’ may have been there from the beginning.’’

The bravura title poem begins with an Orphic incantation: “Let me introduce myself./ I’m your Memory Collector, your companion and spirit guide.’’

She then takes us on an odyssey from the time she was “in my mother’s womb in Paris’’ to Terracina, Italy, Monte Carlo, Karben, Germany, at dance lessons in Geneva, a Spanish market, and the cliffs of Northern Wales, ending, curiously enough, in San Diego. “I perceive the whole world below, life in suspension,’’ she writes, with Whitmanic acceptance.

“El Recuerdo’’ begins with a quote from Charles V: “I speak Spanish to God, Italian to women/French to men, and German to my horse.”

The first time I visit my aunt in Paris,
I still live near Geneva.
She perches in a tiny studio
atop an old stone building on a busy boulevard.
There I drink from a bowl for the first time.
She has a cat and a rocking chair.
I think, why would anyone choose a city
over the splendor of the Alps?
The first time I visit my grandparents in Tarragona
on my own, I’m barely six.
My grandmother offers me a unique and plain cookie
of the kind I haven’t encountered anywhere else
and utters the magic word, galleta.
This is the first word I learn with her.
We watch a game on TV, el juego de la oca,
and these become the next words.
That is how, enveloped in unconditional love,
I discover the language of Cervantes
and of God, as it’s been called.

Cardona’s expansive vision and cosmic outlook may not be to everyone’s taste, but there’s no denying her vision, energy, and wild imaginings. Her credo may well be expressed at the end of a poem about Klimt and Giacometti: “Every wall is a beginning.”