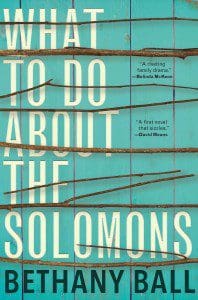 Much of the novel centers on the (arguably) most loveable member of the infamous Solomon family, Yakov Solomon, the family patriarch. He is a force of nature within the kibbutz: he is a successful businessman, a husband to Vivienne, who came to the kibbutz from Algiers and was known as a great beauty during the time of their courtship, and the father of five children whose lives are fuelled by a mixture of travel and minor tragedies that make up the majority of the kibbutz gossip. Yakov is in a constant state of despair over his children, and his non-stop neurosis seems almost ridiculous until the reader realizes Yakov might be onto something.


As you are introduced to the five children and their respective children and spouses, you learn that missteps and bad luck run in the Solomon family tree. There is Marc, the L.A. businessman who gets wrongly accused of money laundering; Dror, the family gossip who goes through a series of questionable wives and girlfriends; Karen, who married the madman/artist, Guy Gever; Ziv, who lives in Singapore with another man; and Shira, a once-aspiring actress who is growing ever-disillusioned both in her personal life and in her career prospects. There is also a smattering of equally eccentric supporting characters, whose lives and issues seem to get caught orbiting around the Solomon family. People in the kibbutz and beyond seem to gravitate toward the Solomons, even as they carry the weight of scandal or failure of varying degrees. The reader, too, feels the gravitational pull of the family’s charm, even when how they handle their individual struggles becomes almost embarrassing to watch. The dramas each endures almost pokes fun at itself, but instead of making the story trite, it reassures us that in the end, everything can and will work out for the Solomons, however much we may share Yakov’s despair.

Throughout her story, Ball subtly integrates to good effect the political conflicts informing the daily lives of the people living at the kibbutz. Many of the men in the Solomon family have served in the Israeli army, and the traumas brought on by what they experienced during war are shown in sporadic flashbacks. Also, Yakov owns a powerful construction business, one that comes with political entanglement, however indirectly.

These political and cultural tensions add complexity to the characters’ pasts and their current identities. But what makes us care about the Solomons is their affection for one another, even during the times they disagree or drift apart and despite however much they may judge each other.