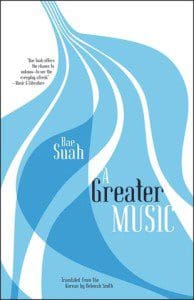 Communication, or a lack thereof, is front and center in A Greater Music, (128 pages; Open Letter Books; translated by Deborah Smith) Bae Suah’s latest novel to come out in English. Our music-loving narrator is an unnamed Korean woman living on and off in Berlin and Korea, struggling to learn German. Her difficulties in the structure and rigor of academia are documented throughout, up until she meets M, an unconventional tutor who teaches with wild disregard of basic grammar and syntax in favor of a higher learning and exchange of ideas. Presented near the novel’s conclusion is their initial meeting. M invites our narrator to read from a passage she does not comprehend. “Even if you can’t understand, you can still make me understand. Look at it that way,” M offers as a defense of her methodology, “and as time passes you’ll come to understand it too.”

Such is the philosophy explored at the core of this novel, and in doing so equates language-learning with music, the nuances of which are not directly translatable and more closely align with emotion. So it’s no shock when our narrator and M develop a romantic relationship whose vocabulary has yet to be determined to the reader. M has an alluded-to allergic condition that further complicates and strains their relationship, though other pertinent details are left out. While standing unarguably as the novel’s primary concern, M comes and goes as a memory whose legacy is a piece of a larger puzzle.


Joachim, a past boyfriend of the narrator’s, acts as M’s polar opposite. In a novel that goes to great length to preserve ambiguity and openness as a worldview, Joachim’s existence as the goat is unmistakable. It appears clear early in the narrative that there is no real connection between these two characters. Joachim takes our narrator to a New Year’s Eve party with fellow university students, and when her “faltering German” causes many of the guests to ignore her completely, he unabashedly places all the blame on her for causing their premature departure. In a book as dialogue-bereft and heady as A Greater Music, their lengthy and soured repartee on the way home is a strong reminder of the failings of conventional language in helping us relate to one another.

Alongside Suah’s examination of language’s shortcomings, she demonstrates a reverence and respect for the everyday. Our narrator’s inclination to turn inward for long periods of time so she may observe and ruminate upon the most banal and mundane of objects becomes an outward turn toward the reader—an acknowledgement that we’ve all shared a common space. For instance, there are extensive passages about the narrator’s experience of missing her tram stop or, better yet, of going to a movie. The movie itself is described in detail, as are the people queuing up outside to see it, as is the conversation with her friend following the movie itself, all of which point toward a person eking the most out of her daily experience.

Of course, music receives fair treatment throughout this novel, too; however, that discussion almost fades to the background at times. Yes, there are discussions of Schubert, Beethoven, and Shostakovich, but these composers and pieces seem more of a means to an end. Suah has her characters talking on these subjects, but only as they exist to communicate ideas. Toward the novel’s conclusion the narrator admits, “If our conversations had revolved around music, rather than language, then I might never have learned anything about M, or the opposite, ended up knowing everything there was to know.” Music not just for the novelty, but for the necessity.