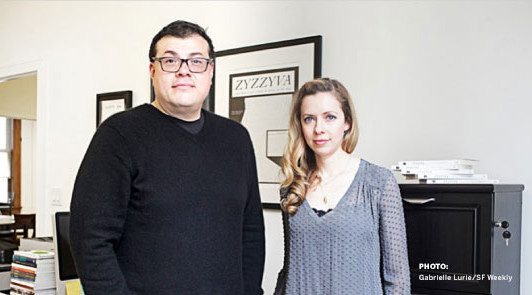 In general, we keep partisanship and day-to-day politics out of the journal. We hope we can provide a space for thoughtful contemplation of all aspects of contemporary life through art—a way of thinking which, while engaged with the political, is not political in its mode and does its work well outside the 24-hour news-cycle.

But we are now compelled to speak to you directly about this election. On November 8, this nation succumbed to the greatest threat that faces any democracy: that a sizable number of its people may find democracy itself—with all its imperfections—too unpalatable, and choose instead to surrender their agency to a strongman. This nation has elected a boastfully ignorant, vulgar, deceitful, professionally unqualified bigot.

There will be much to write and discuss and agonize over in the days, months, and years to come. There is an abundance of blame to go around. There is much work to do. But before we move forward, we’d like to address that which feels most urgent at this moment, and most relevant to what we endeavor to do here at ZYZZYVA.

We believe Donald Trump’s candidacy has cultivated a new strain of fascism and that he has displayed autocratic tendencies. We believe this because we have listened to his words, and paid attention to his actions. He has told the American people repeatedly how little respect he has for basic tenets of our democracy such as a free press and an independent judiciary—and we believe him. He has told us repeatedly how little respect he has for civil liberties, and we believe him. He has told us that he holds women and immigrants in contempt, and we believe him. And now we have seen him select Stephen Bannon, a leading figure in the white-nationalist movement, documented anti-Semite, and enormously effective conspiracy theorist and propaganda creator as his chief-strategist. In order for those Americans dismayed by this election to organize an effective resistance to the incoming administration, we must clearly acknowledge the magnitude and character of the problem we face.


This extraordinarily distressing moment is, of course, personal for so many of us. For our small staff, as in so many communities around this country, the election of Donald Trump reverberates as a stunning rebuke. We are both the proud children of immigrants, and we are feminists; one of us is Jewish, the other is Mexican. For us as for so many other immigrants, ethnic and religious minorities, the disabled, for survivors of sexual assault, the LGBTQ community, for feminists, the message seems clear: the new president and an untold number of his supporters do not see us as Americans.

Our disappointment in this outcome has nothing to do with traditional politics—liberal versus conservative—and everything to do with the still radical ideals of individual freedom and equality on which this country was founded. They are ideals we’ve never perfectly achieved, but for which each generation has fought and for which we will now continue fighting with renewed focus.

Those of us committed to defending civil liberties and a free press—and to resisting any action by the new administration that threatens those ideals—may feel like outsiders, out of step with much of the population, not to mention the party now dominating the federal government. But we are in fact picking up the torch for American ideals. Our shared hopes are profoundly democratic, and profoundly American. We must not let this latest chapter in a long struggle make us feel like outsiders in our own home. We must remember that our participation in this difficult battle makes us American in the best sense of the word.

For all of you who are justifiably afraid of what the future holds, for all of you who feel rejected by your country, where you and your parents or grandparents have worked so hard to build good lives: we share your distress, and we are with you. We share your grief, your anger, and your worry.

ZYZZYVA has never been just a journal: it has always been about community. If you are looking for solace and solidarity as we all take a collective breath and begin to figure out what to do next, please know we are with you. If you’re looking for a safe haven, we hope you may find it in the community we’ve built here in the pages of the journal, where we will vigorously defend the First Amendment as we expand our nonfiction offerings; you’ll find it at any of our events where we can gather to share ideas and concerns; and you’ll find it on our online community of readers, writers, and artists. We’ll work to create even more opportunities, both in the journal, online, and in events, to foster dialogue and analysis of our changing political and cultural climate as we try to answer, What do we do next?

Despair may be rational, but we cannot succumb to it. Albert Camus, who’s been much on our minds of late, wrote:

“The words that reverberate for us at the confines of this long adventure of rebellion are not formulas for optimism, for which we have no possible use in the extremities of our unhappiness, but words of courage and intelligence which, on the shores of the eternal seas, even have the qualities of virtue.”

Keep making your art. Literature can do so much to shed light on the dark corners where the complex convergence of factors that led us to this strange and troubled time festered, and continue to fester. We need that light more than ever. We’ll do everything we can in our own tiny corner of the universe to make sure your voices are heard, your rights are protected, and our community is inclusive.

Yours in solidarity and resistance,

10 thoughts on “Solidarity: A Letter from the Editors”