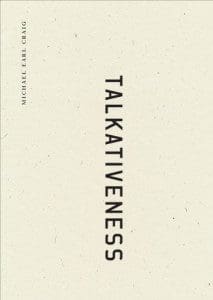 Like films, the poems in Michael Earl Craig’s Talkativeness (104 pages; Wave Books) juxtapose pedestrian settings with dreamlike events. And like films, these poems appeal mostly to the visual sensibility, with spare, declarative language that gets out of the way of their delicately rendered imagery. There are abrupt “cutaways” between unrelated scenes—particularly in such associative pieces as “I Am Examining A Small Crumb” and “Quarter to Five”—and narrative pauses during which the poet fixates on some peripheral animal or prop, like a cinematographer racking the focus of a shot. Film figures explicitly into many of these poems; while Craig’s domestic dystopias resemble those of Lynch and Hitchcock, the poet also invokes Bergman, Herzog, and Chaplin by name.

The book’s most prominent cinematic figure is Akira Kurosawa; the filmmaker is the subject of two poems, and Craig takes his epigraph (“No matter how good what you are saying might be, it will dampen the conversation if it is irrelevant”) from Yamamoto Tsunetomo, a seventeenth-century samurai whose writings on bushido were among Kurosawa’s major artistic influences. Yet it is an earlier Japanese director—and another significant influence on Kurosawa—whose films these poems most resemble: Yasujirō Ozu, known for his use of the “tatami shot,” in which the camera is positioned only two or three feet off the ground, and narrative ellipsis, or the omission of key events within a sequence. The effect of these devices is to implicate the audience in the telling of the story; the viewer feels both that she is kneeling beside the characters and that she is privy to an extraordinary, unarticulated subtext that colors the ordinary lives and events of the present scene. Stillness, in these films, seems to allude to meteoric motion; quietude seems like the conspicuous absence of clamor. Talkativeness, too, is a close-up glimpse of a world in which every commonplace object gestures toward the bizarre, and every domestic setting feels full of outlandish potential.

It is fitting, then, to apply to Craig’s latest collection Wim Wenders’ thoughts on Yasujirō Ozu: “[he] present[s] an image of man [1] in our century—a usable, true and valid image in which he not only recognizes himself, but from which, above all, he may learn about himself.” In these poems, we might recognize—and learn from—our own intellectual neuroses, our longing for novelty, our existential dread. We might identify in Craig’s wry fish stories some truth about our media-saturated inner worlds, the carcinogenic beauty of our habits and possessions. In “What Will I Call This Poem,” we might recognize our cultural fixation on air travel—its Kafkaesque procedures, disgruntled passengers, and attendant anxiety (“While sitting in the plane a man / struggling with his bags puts / his ass against my head for what / (corduroys) feels like a full / minute”). In “The More We Think About It,” an absurd comparison of two pairs of shorts, we might read a sly satire of literary criticism (“Whereas with Jan’s shorts there’s this wonderful / sense of levity we get. Her shorts / somehow make fun of ‘the writer,’ / right?”) “The Trench Coat”—another poem in which an article of clothing serves as an emotional metonym—exemplifies Craig’s monastic attention to and intimate relationships with everyday objects:

I go over to the hall closet and take out the trench coat.
It is tan and plain and almost fifty years old.
“This belonged to my father,” I say, to the tall mirror.
“This belonged to my dad,” I say, turning and looking
at a potted plant. I hold the trench coat out
at arm’s length and give it a little shake.
It reminds me a bit of a shower curtain.
It is the antithesis of something, but what?
With that I slip one arm in, and then the other,
I sort of shrug my shoulders twice, briskly.
I am supposed to be braising a chicken.


In language so unembellished, aesthetic devices stand out. The anaphora of lines three and four lends the statement—that the trench coat belonged to the speaker’s father—symbolic weight, as if repeating it aloud helps the speaker to believe an implausible fact. The coat’s initial descriptors—“tan,” “plain,” and “almost fifty years old”—could easily pertain to a person, and the conflation of the coat with its previous owner seems to confound the speaker further. Yet he is brought clunkily back to earth, in the tragicomic way that Craig’s narrators often are, by the object’s material reality: “[i]t reminds [him] a bit of a shower curtain.” At the end of the stanza, Craig enacts the kind of ironic turn present in so many of these poems; the premise on which the poem has developed is undercut suddenly by the plainspoken non sequitur, “I am supposed to be braising a chicken.”

In fact, Craig is a master of the poetic turn, what John Ciardi calls a poem’s shift “from motion to countermotion,” and Kim Addonizio describes as “[t]he leap from one synapse to another.” All of the poems in Talkativeness pivot tonally on one or more points, usually facetiously, usually in the final stanza. If these turns were less unpredictable—less various in their tactics to disrupt our narrative expectations—they might appear gimmicky, the kind of pyrrhic exit strategies assigned in workshop by James Wright devotees. But Craig’s surprises are always surprising, and his shifts between sincerity and irreverence, and between diegetic and self-conscious narration, feel true in their suddenness and volatility. Sometimes, a bathetic meta-narrator interrupts a stanza, as in “From the Couch,” about a man dying in an old Western, which ends:

Nor do I know what it meant when Dick Cheney
was wheeled into the Obama administration
disguised as Dr. Strangelove. Do you?
I am not an especially inquisitive person.
I’m not even saying this is a poem.

Other times, these turns consist in epic similes; Craig analogizes one experience to another, then moves associatively forward from the metaphor rather than its antecedent. The effect is vertiginous, prismatic, fruitfully nonlinear. “Night Nurse” ends by comparing a slit in the nurse’s skirt to “an old gate / at a Japanese tea garden at night, / in the rain, that is supposed to be closed.” In “Perhaps You See Where I Am Heading,” Craig likens poets to car specialists, sublimating any discussion of poetry in a description of Corvettes:

They say poetry is dead. Or that
it might still live, but only
for insiders. Like the vintage
Corvette owners who work only
on each other’s old Corvettes.

I say maybe, thumbing through my
Hasselhoff Dossier. This further
infuriates. The hoods are always
blue or silver. Or red. Or black
with silver stripes. Or tan.

Perhaps it is these impulsive transitions between precise and isolate images that make Craig’s poetry so uncanny, so distinct from the pastoral normalcy from which it draws its inspiration. But then, there is nothing safe about the territory of these poems, bucolic and anti-academic though it is; here turkeys are evil, tortoises are vandals, God is a simpleton and Pinocchio a pervert. Longtime readers of Craig will find resonances with his previous books—another person being “dragged by an ankle through town;” another study of ants—but Talkativeness is more threatening, more laced with cynicism and grotesquerie than its three forerunners. Opening with an ode to a bullet (which appears both to have been fired and to have made contact), these poems move through litanies of objects and animals that, though initially familiar and innocuous, turn ominous under Craig’s exacting gaze. (“My watch feels like a small corpse on my wrist tonight,” he writes in “Wild for the Lord;” “Is the piccolo an instrument of dread?” he asks in “My Whereabouts.”) So disquieted are we by the sudden malignance of our own homes and possessions that, when confronted with something sad or beautiful or funny—the poet’s mourning for his father in “The Trench Coat,” the lustrous quality of snow in “Winter,” a gentleman burping in “Curriculum Vitae”—we feel it doubly, bodily.

These formal maneuvers—minimalist exposition, paratactic imagery, and poetic turns that defer narrative closure—combined with Craig’s deadpan delivery and eye for fragile, arresting imagery, achieve much the same effect as do Ozu’s stylistic hallmarks. Both artists’ work is surreal and familiar, cosmopolitan and working-class, funny and bitingly sad; both compel us to look again at those experiences we usually dismiss as mundane and un-special. If Ozu’s films present “an image of man in [the twentieth] century,” Craig’s poems offer a reflection of the twenty-first: a time when private moments are increasingly curated for public exposure and the premium once placed on the “relevance” of public communications (referred to in the epigraph and invoked throughout the book) now rewards their immediacy and incendiarism. If these poems are sometimes sinister, it is because they seek to convey the exigency of attending consciously to our workaday lives, and of finding there the novelty, grandiosity, and thrill we so chronically seek elsewhere. And while Ozu’s minimalism straddles the divide between urban modernity and pastoral traditionalism, Craig’s reconciles the public with the private, and the virtual space of dreams and the media with the material reality of our own rooms, our own furniture.

Above all, Talkativeness reminds us that the stuff of everyday life is always perversely lovely, luminously creepy, and worthy of attention. If we glance up from our daily path—if we let our lenses rest at length upon a face or renounce the foreground’s action for the shifting light beyond—the vicissitudes that might ensue will be, if not altogether welcome, always refreshingly bizarre. Craig unsettles as he entertains, and his gift to us lies in this unsettling.  As he writes in the penultimate poem, “This time when I say / ‘dear reader,’ I mean it.”

[1] Let’s assume Wenders meant by “man” individuals of all genders.