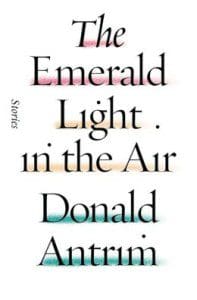 The Emerald Light in the Air (176 pages; Farrar, Straus and Giroux) features seven stories of men late in their lives—men filled with regret who continue to pursue unrequited love, who force themselves to move on by loving newer, different women, men who come to realize they have no desire. Published in The New Yorker over the past fifteen years, each story in Donald Antrim’s new collection introduces the subtle conflicts of relationship and concludes with the patriarchal imperative of suppressed emotion: in “He Knew,” a man settles on his self-destructive young wife, “absently touching and spinning the gold ring on his finger” after she has gone to sleep; another man, in “Ever Since,” tries to convince his jealous girlfriend through extravagant gestures of affection that he loves her, though he begins to doubt it himself. (It seems he is forever in love with his ex-wife.) And in “An Actor Prepares,” a protagonist still seeks emotional and sexual refuge among college students in a performance of A Midsummer Night’s Dream. Each of these stories is painful in its tragedy. Characters question whether or not they have made the right decisions in life, and when they feel they have, wonder why happiness still eludes them.


In the title story, “The Emerald Light in the Air,” the protagonist lodges his car in a ditch and gets lost in the Blue Ridge Mountains. After he finally comes upon a road, he is, Antrim writes, “certain that the road would lead him somewhere familiar if he drove long enough.” It is that ever illusive “familiar” that many of Antrim’s protagonists seek—the right path, something that is recognizable as success—even, sometimes, just a direction in life. Thus, the eponymous story becomes the most hopeful, allowing a man who has lost everything to undergo a transformative, fantastic journey. We are at once unsure of his catharsis, but cognizant that his pain will be resolved, simply through access to the journey. Antrim is a master of this kind of nuanced storytelling, one that infuses simple, seemingly nondescript actions with profound meaning. We know, for example, that the man spinning the ring on his finger in “He Knew” is doing so because he is not O.K. The only thing that will save him is a family—and it doesn’t quite matter with whom he makes one. But hints are given along the way that betray his hopes; he wonders, for example, if he likes his new wife more when she has overdosed on her anti-anxiety medication. In “Pond, With Mud,” Patrick Rouse shares a conciliatory beer with his wife’s ex-husband, an unemployed chamber musician whom he discovers playing the violin in Grand Central Station. This simple act becomes a communion of sorts: The men are drawn together through their failure as artists, and their link to the same woman, whose child sips juice beside them at the bar. They are a family of sorts, Patrick thinks.

Throughout The Emerald Light in the Air, Antrim employs a hilariously wry first-person perspective (such as the narrator Reginald Barry, Dean of Student Life and Professor of Speech and Drama at Barry College, in “An Actor Prepares”) or reflects the voices of his various characters in free indirect style. In “Pond, With Mud,” the narrator appropriates the language of the protagonist, Patrick, a failed poet: “Were you to have seen the two of them, the man kneeling before the boy, the boy sucking on the almost invisible plastic straw, you might have imagined that the boy was drinking from the man’s hand.” This line seems uncharacteristic of Antrim himself, and is developed later on with subsequent lines of repetition meant to replicate stuttering, along with choppy fragments of drunkenness.

Antrim transcends the content of his stories with compelling style. In “Ever Since,” the acquisition of a cigarette becomes the solution to the protagonist’s brittle relationship with his girlfriend. (In “Another Manhattan,” it is a bouquet of flowers). This miniature quest provides a stage for characters to have private conversations with the protagonist. In fact, the choice to set this story in an apartment helps to foment private conversations, compartmentalized and various combinations of characters that are always rotating as a result of empty glasses, the need for a smoke in a stairwell: ” ‘I want you to know that if we sleep together and get pregnant I’m keeping the baby.’ He frantically wrenched the door open … ‘It used to be that people always smoked in the fire exit!’ he blurted.” Omniscience is made invisible in “Another Manhattan,” where Antrim makes use of call waiting to clue the reader in to the thoughts of four characters simultaneously. The various uses of diegetic elements to disguise narrative tools simultaneously grant Antrim’s stories literary complexity and the simplicity of real-world observation.

The Emerald Light in the Air is a masterful amalgamation of subtle and muted storytelling that mirrors the characters’ inability to communicate their emotions. For, if these men admit unhappiness, ignorance, or failure into their lives, they end up as Jim does at the end of “Another Manhattan”—admitted, once again, to the only institution that accepts depression as normalcy: “In the deep of the night, they came for him. A male nurse helped him into a wheelchair, and then pushed him through the white labyrinth of hallways and waited for the elevator.”