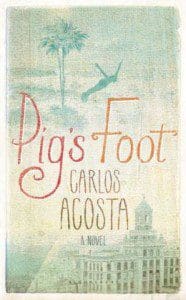 Günter Grass begins his magical realist masterpiece The Tin Drum by explaining that “no one ought to tell the story of his life who hasn’t the patience to say a word or two about at least half of his grandparents before plunging into his own existence.” In Pig’s Foot (Bloomsbury, 333 pages), Carlos Acosta’s first novel (translated by Frank Wynne), the narrator more than abides by this advice. Pig’s Foot is the story of the narrator, told from the very beginning, when his great-great-grandmother arrives as a slave in Cuba in the 1800s. Acosta’s novel, set in a remote and muddy town and among a large family, is the tale of all of Cuba as well as just one man.

Oscar Mandinga, a black Cuban and the last surviving member of his family, is living in Havana in 1995. But as his grandfather tells him, “No man knows who he is until he knows his past, his history, the history of his country.” Acosta frames the story as  the dialogue from Oscar’s interrogation by Commissioner Clemente, a doctor and alleged Grand Wizard of the Cuban branch of the Ku Klux Klan. This narrative framing allows for a mythical rendition of Cuba’s history which always remains rooted in reality. As we hear a master storyteller relate the past as it was told to him, we’re aware of a fog between Oscar’s words and actuality. But this is good, because the fog allows Acosta to play tricks.


Oscar begins by telling the history of Pata de Puerco, the town with so few people that “it seemed like the last place God made.” In the 1850s, a family of powerful slave traders moved in, and with them, seven thousand African slaves. Oscar’s great-great-grandparents are among the slaves, who are soon freed, and from there we follow their lineage through time. His family is present during the Ten Year War, the Mob years, the Castro years and present in so much more of Cuba’s history—always involved but never central in the action. Even as we learn about the slave trade, the revolutions, and other formative moments in the creation of what we know as Cuba, the novel is always centered on this one family and this one town.

There are obvious similarities here to Gabriel García Márquez’s One Hundred Years of Solitude, which also tells a wider history through one remote and isolated town. But unlike One Hundred Years of Solitude, which centers on the effects of outside influence and the loss of the old world, in Acosta’s novel slavery and its aftermath are the central themes. Cuba’s treatment of its black population has always been a key part of its history, and Acosta recognizes as much. Like their fellow black Cubans, the Mandingas are both essential and marginalized, and by understanding their role in the island’s history, we better understand Cuba as a whole. As Fidel Castro, who is noticeably absent from Pig’s Foot, said about Cuba in a 1977 speech, “We are not only a Latin American nation, we are an Afro-American nation also.” Acosta does a wonderful job expanding that idea in his intriguing first novel.