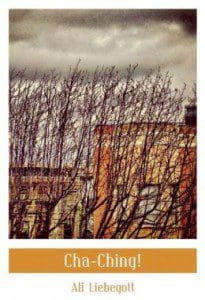 Ali Liebegott’s Cha-Ching! (City Lights/Sister Spit; 248 pages) is a book worthy of its pleasingly onomatopoetic title. Though the plot is familiar—lost woman on the edge of thirty moves to New York City out of a desperate need to find herself, but becomes disillusioned by the city’s gritty reality yet manages to hoist herself up by her bootstraps—it is made fresh and compelling because of Liebegott’s optimistic and sincere protagonist, Theo, and her particular struggles as a “sirma’amsir” lesbian in ‘90s San Francisco. And it’s because of Liebegott’s carefully tempered rendering of Theo that the novel offers a subtle and compassionate depiction of addiction and its cycle of despair-and-hope, too.

As the book opens, Theo has decided to move to New York, where she  “would be a person who didn’t drink or smoke or watch TV. She’d transform herself into a well-read adult, starting with the complete works of Fyodor Dostoyevsky, then move her way through biographies of famous painters […] before she turned thirty she wanted to be able to go to a party and have a conversation that involved anything besides details from true-crime shows,” a resolution she makes after watching an episode of TOP 25 BEST 911 EMERGENCIES, in which a homeless/drunk/mentally-ill man is discovered trapped deep within a garbage truck.


Theo has admittedly grandiose schemes, but just enough pluck and sardonic self-awareness to make us root for her success, even as we see the foreshadowing of her fall in NYC (because of course there is a fall). For example, right after her avowal to become a better, smarter person in NYC, Theo confides in us that, at her going-away party, she had “[tried] to get as drunk as possible to compensate for all the drunks she’d never have again,” and subsequently had bitten through her lip in a rowdy dance floor struggle.

The novel’s other protagonist, Marisol, appears fairly late in the book. She’s a gorgeous librarian, whom Theo meets on an upswing. She’s obtained a new apartment in ‘90s Brooklyn, has a cool friend-of-a-friend for a roommate, and owns a perfect new pair of men’s leather boots. Their first few dates include a paella party and ice-skating in Rockerfeller Center, but things begin to sour when Theo’s roommate Sammy takes her out for lobster and orders a pitcher of beer. Able to “conjure the exact bitter taste” of it, Theo pours herself a glass. Here, Liebegott captures addiction perfectly and simply when she notes Theo had “already taken the drink when she ran toward the first thought”— to pour a glass—“instead of away. Now it was just a formality to swallow the beer.”

When Theo begins drinking again, she starts her slow slide back toward the self-destructive behaviour she’s been trying to escape since leaving San Franciso. There’s a return to gambling, blackouts, and awful, drug-hazed sex, in which Marisol, drunk and on Xanax in an Atlantic City hotel room, commands Theo to “put your fist inside me.” Theo obeys while thinking that “the date had become a shitty, poorly built tin house being swept away in a storm. There went the corrugated tin roof.”.(As those sentences attest, Liebegott’s wonderful voice has the poet’s ability to carry a metaphor to its logical conclusion.) When Theo returns from the room after leaving to gamble, Marisol has left to catch the bus back to NYC; she thinks of hiring a skywriter to proclaim her love, but instead returns to the roulette wheel.

Despite the subject matter at times, the story never gets overly dark. When Theo meets up with Marisol again at a free dental clinic downtown she’s surprised by her joy—Marisol’s presence “[melting] away the post-drug despair.” Theo thinks of saying something dramatic to her like “I need you,” but instead she chooses to tell her how terrible she felt in the dentist’s office.

There are no soaring proclamations of love or sober living here. But by the end of the novel, we understand better the book’s memorable title. “Cha-Ching!” suggests not only the slot machines (and roulette wheel and horse track) symbolizing Theo’s downfall, but  more importantly, Theo’s dawning realizations as she cycles through life’s ups and downs to eventually arrive, we hope, at a better place.

One thought on “Betting on a Better Tomorrow in ’90s New York: Ali Liebegott’s ‘Cha-Ching!’”