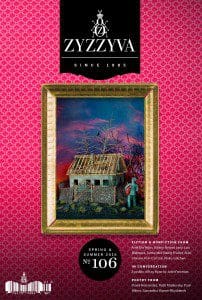 Ron Carlson is the author of several books of fiction, including Return to Oakpine (Viking) and The Signal (Penguin). He is the director of the MFA Program in Fiction at the University of California at Irvine. His fiction appeared in ZYZZYVA Issues No. 96 and No. 100.

His latest story for ZYZZYVA, “Who Will Help the Queen of the Rodeo?,” savors that time when families have just begun: the children are still children, the time spent together is uncomplicated, and the goodness of the world is palpable—even if we can’t help but know that this idyll is fleeting. Set at the beginning of a summer vacation, reading Carlson’s story now is apt. But it’s the story’s tenderness that makes it a particularly welcoming world in which to enter. The following is an excerpt of Carlson’s story. You can read it in its entirety in Issue No. 106, which you can order here.

An internal refugee crisis in the United States; a modern America that tolerates decades-old, interfamilial vendettas; a city that keeps burning down year after year—these are the kinds of warped worlds captured in Katie Chase’s story collection, Man & Wife (220 pages; A Strange Object). Within these surrealities, Chase exaggerates societal traditions into distended proportions, focusing on the experiences of women at pivotal moments in their youth, examining their family dynamics, and, concurrently, their strange societies’ shifting norms. What’s even more unsettling is how eerily similar these worlds (and all the dramas that exist within them) are to our own. […]

In the aftermath of Greece’s 2010 debt crisis, amid the hardship in his country, Christos Ikonomou wrote Something Will Happen, You’ll See (Archipelago Books, 250 pages, translated by Karen Emmerich). A recipient of some of Greece’s highest literary honors, as well as praise from across Europe, Ikonomou’s collection of interconnected stories focuses on people with barely a hope for attaining something better than what they’ve been given: a son stays up all night to watch the streets so his neighbors can get some sleep; a group of elderly industrial workers, recently laid off, huddle around an oil-drum fire outside the […]

I met Lucia Berlin in 1977, the year her first small book appeared, but it wasn’t till I published her collection Phantom Pain that we became great friends (Tombouctou Books, Bolinas, 1984). Lucia was working at Alta Bates Hospital then, in Berkeley, at the switchboard and in the waiting rooms. Hospital work suited her. She was interested in extremities, in gossip, in contrary people with serious complaints, who also felt relieved to be alive. It was hard, low-paying work. She would have preferred to be writing, but she almost never said so. She did produce several new hospital stories (“Emergency […]

Kristopher Jansma’s first novel, “The Unchangeable Spots of Leopards” (Viking), was the winner of the 2014 Sherwood Anderson Fiction Award and a finalist for the Prix de l’Inapperçu, as well as a Barnes & Noble Discover Pick and an ABA “Indie Next” Choice. His work has appeared in Electric Literature, the New York Times, the Believer, The Millions, and other publications. His novel “Why We Came to the City” will be published by Viking in February. His story “Chumship” appears in the Winter issue.

“Chumship” lays out the friendship between two boys, Clark and the narrator, through high school and into college. The narrator is in thrall of droll Clark, who has an innate gift for spinning fictions, including a plan for hatching an imaginary girlfriend as a ploy for getting an actual one. Funny yet tender, Jansma’s story makes the most of its theme about the lies we tell others and ourselves. The following is an excerpt.

Heather Monley’s fiction has appeared in Crazyhorse and McSweeney’s Internet Tendency, and her story “Town of Birds” won the annual Kenyon Review Short Fiction Contest. Her story “Paddle to Canada” appears in our Winter issue.

Though under 2,000 words, “Paddle to Canada” is a rich and nuanced telling of a family’s breaking apart, and how we wonder if our happy memories from the past were truly that, and how me carry the weight of experience. The following is Monley’s story in full.

Paul Madonna writes and draws the weekly series “All Over Coffee” and is the author of “All Over Coffee” (City Lights Books) and “Everything Is Its Own Reward” (City Lights Books). His work has been published internationally in numerous books and magazines, exhibited in galleries and museums, including the Contemporary Jewish Museum in San Francisco and the Oakland Museum of California, and he is a contributing editor to ZYZZYVA. His story “The Snake That Always Bites My Ass” appears in the Winter issue.

Though known as an artist, Madonna also writes fiction, such as his story “Hero,” which was published in ZYZZYVA No. 100. “The Snake That Always Bites My Ass,” which is also accompanied by Madonna’s art work in the Winter issue, is set in Thailand among ex-pats. The following is an excerpt from it.

Austin Smith, who lives in San Francisco, is a Jones Lecturer at Stanford and the author of four poetry collections, including “Almanac,” which was published by the Princeton Series of Contemporary Poets. His poems and fiction have appeared in The New Yorker, Harper’s, Virginia Quarterly Review, The Threepenny Review, and in ZYZZYVA Issues No. 83 and No. 100. His story “The Cave” appears in the Winter issue.

Relating the arrival of a new kid to a small farming community in Illinois, “The Cave” centers around its young narrator going to the boy’s house for dinner one evening. But around that event, which leads to them exploring a cave at night, is an examination of a child’s rural life, one not immune from the hardships true for children everywhere, including the menace of bullies. In the following excerpt, our narrator talks about the red-headed twin sisters who, for whatever reason, decide one day while getting on the school bus to single him out for their cruelty. The following is an excerpt from “The Cave.”

Elena Mauli Shapiro’s story “Bank Repos for Sale,” which appeared in Issue No. 101, accounts for two of the eleven Notables earned by our contributors from the Best American series this year—having been recognized by both Best American Short Stories and Best American Nonrequired Reading. It is a darkly comic story set in an America that, as its title suggest, couldn’t care less about a skyrocketing stock market or the newest app.

Shapiro is the author of two novels, “In the Red” and “13 rue Therese” (both published by Little, Brown). This is her second story published by ZYZZYVA. Her story “Commuting” was published in Issue No. 94. The following is an excerpt from “Bank Repos for Sale.”

This month, when the Best American anthologies are in stores, we’d like to excerpt the many stories and essays from 2014 that received Notables from that prestigious series. We’re starting with a story by Elizabeth Tallent, “Mendocino Fire,” from our celebrated 100th issue. The story of the peripatetic life of a young female tree-sitter, raised, and arguably forsaken, in the wilds of the forests of Northern California, it delves into the haunting ache of abandonment and an intense yearning for connection. (It’s also the title story of Tallent’s new collection, published by Harper this month.) Of Elizabeth Tallent’s work, Richard Ford has said, “Her ear is perfect; her gaze searing and unmistakable.” We think you’ll agree.

By any estimation, writer Lucia Berlin led a full life. As a small child growing up in 1940s Texas, she fended for herself against an abusive grandfather while her mother remained a distant figure. Her glamorous teen years were spent in Chile among wealthy expatriates, attending dances and other high society functions after her father struck it rich in the mining industry. As an adult, Berlin frequently moved across the United States and Mexico, including a lengthy stay in the Bay Area. Along the way, she married three husbands, mothered four sons, and held an array of  jobs–from cleaning woman […]

It takes a skilled writer to make us see the familiar as something new. In her first book of fiction, The Wonder Garden (Grove; 386 pages), Lauren Acampora turns an anthropologist’s discerning gaze on the everyday sights and sounds of suburbia. In doing so, she creates the impression these commonplace scenes and images are imbued with some hidden meaning, whether it be a foreign girl visiting for the first time a mall, where she “touches the clothing in Aeropostale as if it were powdered with gold dust,” or the markings on a “wooden coffee table that still bears the scars […]