We hit a pheasant just outside of Myton. The ditches were choked with tall grass and he jumped up right into our windshield and bounced all the way across the road. He woke both the kids and left a lightning crack in the glass top to bottom. There was no traffic in the cloudy afternoon and I loped back and found him and wrapped him in one of the clean rags in the toolbox after showing him to Mickey and Doris. I had all the summer gear roped into the back of the truck, both bikes and some new lawn furniture along with our gear. We all felt bad, but he was a wonder. “Now, we have to cook him for dinner,” I told them. “Like a chicken.” I clipped one brilliant tail feather to the visor in the old Chevy.

“Should we pray for him,” Doris asked.

I had both car seats on the front seat and Mickey reached his hand out toward the crack in the windshield.

The glass was unbroken about half the year. Mostly, I got it blistered with stars from the chip seal road work they did every summer on the other side of the lake. The town of Windchime was crazy for those pebbles. You could not go slow enough up there; there was always some character in his tool truck coming your way going forty.

We drove through Myton, past the old fort which is now a repair garage, and on through the desert to Givemore where we stopped at The Showtown for groceries. The big ranch town has a Kmart and a Walmart as you enter, but we always stopped at Showtown to get the first month’s groceries. It was owned by one of our neighbors up at the lake, Dalton Pace, who also was the butcher. Touring that old store was a once a year enterprise when we filled the cart over the top with great loads of every possible thing. Dalton was at the meat counter and saw us coming. “Up for the summer,” he said. “Good to see you.”

The kids looked at him leaning against the glass case with his bloody apron and I said, “It’s Mr. Pace from the log cabin.” His place was a deluxe log home always varnished brightly with a log outbuilding, a workshop I envied. There were always two or three ATV s in the yard.

They stood there, students of the carnal display, and sometimes I worried about how measured and shy they were, but now Doris raised her hand in a wave and then Mickey waved.


They weren’t sure, but finally they nodded.

I ordered up two books of his hand-cut bacon and several packages of the ground chuck and six rib eyes. I told him about our pheasant, and he used his big crayon to write out a recipe for me with cooking instructions and gave me a baggie of seasoning.

“We killed a bird,” Doris said, sober as the king’s magistrate.

“And he’s going to be delicious,” Dalton said. “Are you coming down to the rodeo tomorrow?”

“I want to go to the rodeo,” Mickey said. “I want to see the horses.” We had spent two hours last summer at the little tiny roundup at Windchime.

Dalton Pace fished in his shirt pocket and pulled out rodeo tickets and handed them over.

“Mindy is queen this year.” He smiled. We’d known his daughter since she was six or seven; he had three.

“The parade’s at noon,” he told us, giving me now all our wrapped parcels, and a wrapped brick of dry ice for the cooler. “They’re having an auction at the old office in the afternoon,” he told me. “We’re moving to the new grounds; there’s a new building there. You may want to come over, Mike. They’re selling the typewriters and going to computers. A rodeo with computers. It had to happen.”

I started to roll away and the kids stood still judging the man. “I’ll see
you tomorrow,” he said. “Look for the clown in the red tuxedo.”

They stared, my little jury. “Say goodbye,” I said. I loved saying that because I knew there would come a day when my life would not need such instructions. You tell your children to say goodbye. You sit with them and their shoes and you say, “Other foot,” while they’re thinking something you’ll never know. I was saying “Other foot,” less and less.

I called Annie from the payphone in front of Grinders, the funky coffeeshop downtown, because it was one of her favorite places when we came to town once a week. She was still at the office and was hoping to clear the case she was working on by noon tomorrow and drive up in her car.

“Go through town and meet us at the rodeo,” I said. “It starts at seven.”

“The adventure has begun,” I told her. “We’re having pheasant for dinner.”

She knew immediately what had happened. “Use the electric skillet,” she told me. “It has a lid in the drawer under the stove.”

“I should have been a teacher,” she said. “If this deal traps me in town one more day, I’ll regret it.”

“You should have,” I told her. “You could have figured out the Spanish American War better than I have. But you’re a magnificent lawyer. Teach those guys right and wrong.” It was an old joke about the paperwork associated with water rights litigation.

“Be careful driving up that mountain, and have a good time.”

“See you tomorrow, “I said. “Don’t bring your valise. We learned that last year.”

In the cab of the truck Mickey had climbed out of his car seat and was running his fingers along the crack in the windshield. I buckled him in and we drove up the old canyon highway through the red rocks and up into the pines, alert for deer in the gloomy afternoon.

The kids were sleeping when we turned onto the dirt track along the lake front and I crept through the forest there, all the new six-foot spruce and jack pine lining the road. The beetle had killed the old growth and now the forest was coming back. When I steered us onto the lane of our driveway it was grassy and the truck was silent as I parked the vehicle alongside the old woodpile.

I left the kids sleeping and went around and found three deer in the meadow. The grass around the cabin was tall and I could see two deer beds in the treeline beside the fireplace wall. The old heavy door worked easily and I propped it open and went in waving away the webs. It was a feeling every time, entering the old place, the fine smokey smell and everything where we had put it last August. I opened the back door and all the blinds and I rolled the mower out beside the house and turned on the electricity. I washed the wagon wheel tabletop and closed the fridge and turned off the taps. Going outside again to turn on the water, in the valve box I’d dug, I saw the truck door swing open and two little legs slid onto the ground. 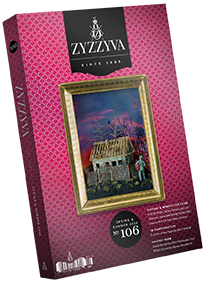 “‘Who Will Help the Queen of the Rodeo?’ by Ron Carlson, ZYZZYVA No. 106, Spring/Summer” by was published in ZYZZYVA No. 106. Purchase the back issue in our shop.