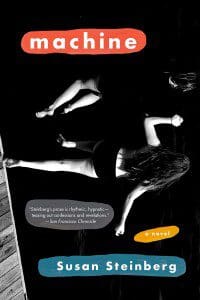 You can accuse the narrator of Susan Steinberg’s Machine (149 pages; Graywolf) of many things, but failing to hold the reader’s attention isn’t one of them. Steinberg’s first novel after a series of story collections, Machine chronicles a dread-filled summer on a nameless shore following the suspicious drowning of a teenage girl. Our narrator, a former friend of the deceased, grapples with guilt, teenage boredom, and her own privileged family’s struggles. “This is a story about desperation,” she states, “you could also say acceleration; but in this story, they’re the same.” The novel unfolds in haunting and poetic style, with Steinberg making liberal use of the semicolon to propel the reader along the page. Despite its brief length, the narrative feels weighty in its ruminations on youth in despair. Steinberg discussed Machine with ZYZZYVA via email:

ZYZZYVA: Machine  is told in these somewhat independent sections, many with their own unique formatting, and several of which have been published as standalone pieces in places such as ZYZZYVA Issue 115. The structure is not quite what I’d call a “novel-in-stories,” but it is something unique. How did you develop the structure of Machine?

Susan Steinberg: I thought I was writing a linked story collection narrated by the same character throughout, but as I started putting the pieces together, it made more sense to try to envision it as a novel. This meant I had to stop thinking about whether or not it would satisfy whatever expectations or perceptions I had of novels in general, and start focusing on why I had to tell this story in an often fragmented, differently formatted way. I had to figure out how to push aside conventions—formally, structurally, and stylistically—and still have it make sense. I spent a lot time playing with chronology and condensing time and combining characters.  It’s a book, too, that omits a lot, including names and scenes, but I find omission to be a big part of how I understand story.

Z:  The novel made me think about how something interesting often happens while we’re on vacation, particularly when we’re young: we experience the desire to toss aside inhibitions and give ourselves permission to act like a different version of ourselves. The narrator of Machine is frequently concerned with how she will be perceived by both her own social clique and the locals who live by the shore. Was the sometimes performative nature of “being on vacation” on your mind while writing the novel?


SS: I did want to convey that there’s a lot of performing going on, but I see the setting less as a vacation and more as a repeated ritual, as if the narrator is always expected to live two lives: the girl she is in the city and the girl she is at the shore. I see vacations, in general, as luxury, whereas I see these summers, drunken as they are, as pressure for the narrator, particularly in how they relate to her identity. Sustaining that performance, the constant shifting definition of self—and to be conscious of it—is fraught and often painful, so I don’t see it so much as a freedom as I do as an obligation, just like the performance she does when she’s back home.

Z: There is an undercurrent of menace and latent violence throughout Machine. The book is a reminder that teenagers can be, well, dangerous. What were some of your literary influences in writing what one might call a more realistic depiction of young people?

SS: This is a great question, and I’ve been thinking about it a lot. I’m not convinced my depiction of young people comes from literary influences. I think it comes more from having been the teenager I was.

Z: I noticed a reoccurring theme of doubling throughout the novel –– there’s the narrator’s father’s study in their family house versus his study in their house by the shore; there’s the pristine side of the lake the family vacations on versus the “poor side” of the shore, and more. The narrator even states at one point, “…say there’s no such thing as fiction; say there’s only substitution.” Was this doubling a thread you wove through the book, or something you noticed appearing during the writing process?

SS: The doubling wasn’t something I planned, but at some point I realized I was returning to issues of substitution and replacement and, again, performance. I became interested in how characters were playing the roles of other characters—the narrator inhabiting the life of the drowned girl, the other woman inhabiting the life of the narrator’s mother, the brother’s plan to follow in the father’s footsteps—and it led me to thinking about how fiction, too, is just a replacement for something else, a situation or emotion, and how simultaneously liberating and restricting that can be. I think this relates to your earlier question about performance and vacation, that fine line between when it’s fun/freeing and when it’s work. Perhaps that fine line is the where much of the conflict lives in this story.

Z: In this novel, you seem to bend the semicolon to your will. You deploy this perhaps under-utilized bit of punctuation to great stylistic effect throughout the novel. When did you realize that you could use the semicolon as an effective means to tell story you wanted to tell in Machine?

SS: I love “bend the semi-colon to your will.” I want that on a shirt.

I used a lot of semi-colons in my previous book, Spectacle, and then I was being more ambitious, trying to make the semi-colon connect more than just clauses. I wanted to connect entire stories to one another with a single semi-colon, and I wanted to makes a point about intimacy, to show the difference between clauses that need to be separated by a semi-colon versus a period. In writing Machine, it was more a way to work with time and pacing. I was thinking about the speed of the semi-colon, how it’s faster than a period, slower than a comma. And it’s more elegant, for lack of a better word, in my opinion, than both. I like forcing that elegance onto an ugly scene. I think it creates an automatic tension.

Susan Steinberg is the author of the story collections Spectacle (Graywolf), Hydroplane (FC2), and The End of Free Love (FC2). She is the recipient of a United States Artists Fellowship, the Pushcart Prize and a National Magazine Award. Her stories have appeared in McSweeney’s, Conjunctions, The Gettysburg Review, American Short Fiction, and ZYZZYVA Issue 115, among others.