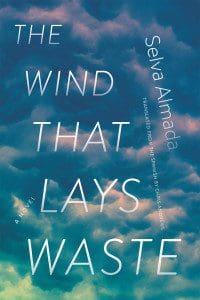 A devoted man of God and his sullen teenage daughter are on the road to a church in a remote village when their car breaks down. They soon find themselves at the mercy of a grizzled mechanic who has sworn off religion and runs a garage alongside his wide-eyed son. Though the setting may be Argentina, the setup for Selva Almada’s latest novel, The Wind That Lays Waste (124 pages; Graywolf Press; translated by Chris Andrews), feels as though it could be plucked from the pages of revered Southern author Flannery O’Connor. But while Almada shares some of O’Connor’s subject matter and spiritual concerns, this is largely where their similarities end. O’Connor’s stories are well known for their frequently doom-laden endings –– the personal violence building to almost apocalyptic proportions in the lives of her characters. Almada tends to take a gentler and more introspective tract.

The slender tome focuses on the tentative connections between Reverend Pearson, his daughter, Leni, and the sparse crew at the garage they find themselves marooned at: the elder Gringo Brauer and his progeny, Jose, nicknamed Tapioca. As Gringo works on the broke-down auto, and as a storm begins to brew over the countryside, Almada steadily reveals the characters’ backstories in alternating chapters.

As a young boy, Pearson was baptized in a river by a traveling preacher and has since taken to his role as Reverend with a zeal his disaffected daughter does not share. She still bears the emotional scars from the day her father abandoned Leni’s less-believing mother by the roadside. Regardless, Pearson clearly holds sway over his congregation, which Almada wonderfully depicts in an expressive passage:


When he lifts his head, he takes two steps forward and looks at his audience. The way he looks, you know he’s looking at you, even if you’re sitting in the back row. (It’s Christ who’s looking at you!) He begins to speak. (Christ’s tongue is moving in his mouth!) His arms begin to perform their choreography of gestures, only the hands moving at first, slowly, as if they were caressing the listeners’ heavy brows. (Christ’s fingertips on my temples!) Gradually his forearms and upper arms begin to move as well. The torso remains still, but already you can sense a movement in his stomach. (It’s the flame of Christ burning inside him!)

In contrast to the Reverend, Gringo Brauer is a practical, “salt of the earth” type whose days of hard-drinking and womanizing are far behind him; he’s since settled into a contented middle-age, satisfied with a life fixing cars and looking after his collection of stray dogs, as well as another kind of “stray” –– the son he never knew he had until the boy’s mother dropped him off at Brauer’s doorstep.

As the Reverend’s auto troubles lead to a long, humid afternoon of repairs and conversation, Brauer is none too pleased when Pearson begins saying grace over their meals and speaking of spiritual concerns. He tolerates the Biblical talk the best he can, but when Pearson takes a shine to Tapioca –– seeing in the boy a reflection of himself as a younger, untainted child –– conflict between the two men threatens to boil over. Almada proves adept at depicting the religious fervor that takes hold of Pearson when considering Tapioca; there’s an unnerving intensity and single-mindedness to his passion:

Tapioca, on the other hand, was as clean as a newborn child; all his pores were open, ready to take Jesus in and breathe him out again.

Together they would turn the Reverend’s work, which was still just the sketch of a long-cherished dream, into something concrete and monumental.

Tapioca, Jose, would not be his successor, but what the Reverend had failed to become. Because Reverend Pearson had a past, too, as he knew better than anyone else, and in that past there were mistakes, and those mistakes came back now and then to haunt him like a vague but persistent cloud of buzzing flies. There had been no Reverend Pearson to guide him. He had fashioned himself as best he could. But the boy would have him. With Reverend Pearson on one side and Christ on the other, Jose would be invincible.

The climax to The Wind That Lays feels appropriately Biblical: we watch these two very different men come to blows in the mud as rain pelts the earth and thunder cracks the sky. In the grim, often fatalistic world of Flannery O’Connor, this violent confrontation would have likely led to an irrevocable tragedy. But here there is a path forward for these characters, one in which they might learn to let things go and develop as individuals. Alamada’s nuanced approach leaves room to explore her characters’ pasts in some detail, but, crucially, these individuals –– even the Reverend Pearson –– are not defined by their mistakes.

No doubt there will be consequences for their actions, as Pearson’s determined quest to convert Tapioca against Brauer’s wishes only further drives the wedge between the Reverend and his daughter. But their mission will not end here, at this wayward garage in the country. For them, the road stretches far ahead; Almada’s novel offers but a brief glimpse of a moment in their journey, but it is one she renders with great and deliberate meaning.