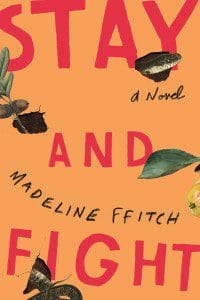 Building family in the face of capitalist-driven environmental collapse might look something like Madeline ffitch’s first novel, Stay and Fight (304 pages; FSG), at once indulging fantasies of reclusive living outside the gaze of the State, while simultaneously narrating the impossibility of such an existence. This is not to say Stay and Fight denies the prospect of, or human capacity for, crafting alternative, distinctly non-traditional ways of surviving. On the contrary, ffitch’s characters sustain themselves, maintain a home, and even raise a child, all miles outside the comforts and confines of urban or otherwise familiar civilization. And yet, even in the wilderness of Appalachian Ohio, systems and their effects creep in: child protection services, energy companies, public schools. Even while off-the-grid, the grid watches.

A uniquely comprehensive and necessarily tangled understanding of what it means to live under normalizing forces and rapid climate degradation is present throughout Stay and Fight, though the plot pays these matters little explicit concern, and for good reason: it doesn’t have to. Told from four distinct perspectives, each character’s understanding of one another and themselves is fundamentally mediated by their conditions; ffitch doesn’t need a manifesto to demonstrate Anthropocenic stakes. The novel’s first narrator, Helen, a young college-educated woman from Seattle, arrives in Appalachia with her boyfriend Shane, looking to make it on their own on twenty acres of empty land. It doesn’t take long for their plan to collapse: put off by his girlfriend’s chattiness and their highly isolated life, Shane leaves after just a few months of “roughing it” in a small trailer and trimming trees with Rudy, a helpful but abrasive local drunk. Helen is alone, but doesn’t mourn for long. She soon takes over Shane’s job as Rudy’s assistant and is introduced to the rest of her neighbors, namely Lily and Karen, a lesbian couple living on “The Women’s Land Trust,” a separatist community. When Lily gives birth to a baby boy, Perley (the novel’s fourth narrator), the couple knows their days in the woman-only community are numbered, prompting Helen, eager to find company and purpose, to offer the new parents a place to live on her land. Lily and Karen have lived in Appalachia for years and know that Helen is clueless and, to make matters worse, thinks she knows everything. Despite their concerns, the allure of living rent-free is too good to pass up. They set off to build a house, unsure of what their life will look like inside of it. A happenstance family forms.

Stay and Fight is built on such moments of unlikely and nearly coincidental intimacies. Soon, the women begin to care for, feed, and shelter one another every day. ffitch, however, avoids the glossy, familiar narrative of feminist utopia this story could have easily reproduced. Life is primarily unpleasant and usually rife with conflict. Helen embraces “the great outdoors” with the gusto of someone who romanticizes fleeing conventional society, and, despite having almost no practical survival skills, tells Lily and Karen what to do and how to do it at every turn, obsessed with “best practices” for living off the land.


Helen’s overbearing behavior founds one of the novel’s most engaging and humorous critiques, that of liberal-arts-flavored elitism. While sparing no attempt to make herself seem native to the poverty-stricken area, Helen lives in Appalachia voluntarily. She loves the hardship, even, or perhaps especially, when it seems most unbearable. Yet Helen also feels fundamentally separate from those who were raised there, proud of her B.A. in liberal studies and overwhelmed by her felt obligation to share knowledge with those around her:

“I think you’re using the word yuppie incorrectly,” I said. The men looked at me, “Young urban professional, right?” I said. I looked at Aldi for confirmation, but Aldi, so ebullient with Rudy, gazed at me like the stranger I was. I pressed on. “That principal may be a professional, but he’s definitely not young or urban.”

“Helen’s from Seattle,” Rudy said. “She’s just mad because she’s a yuppie too.”

We all know a Helen. She is easy to dislike, and disdain toward her is merited. But like everything else in ffitch’s story, it’s complicated. Helen is the only one with a steady job, and she helps care for Perley, becoming an integral part of the toddler’s life. Even when they don’t want to, Helen, Lily, Karen, and Perley come to need each other: no one goes to the doctor, and rather than letting Perley play with toys, they teach him how to use tools. They share a skepticism of social structures, nationalism, and institutions that speaks to a well-founded distrust of government and Western-sanctioned ways of doing things, a distrust which, as a reader, resonates profoundly.

They might not enjoy it most of the time, but staying together is the only way this family can fashion a life that looks the way they want it to. This is not want in the pleasurable sense, but rather want as it relates to need. Amid fighting and hunger and a relentless snake infestation, they retain the power of self-actualization, straddling the hard-to-measure distance between agency and adversity. Each choice—such as not wanting Perley addicted to Western medicine and sugar, or brainwashed by patriotism in school—involves the hardship necessitated by doing everything without help, outside the rules of the State. No matter how strenuous, it seems the only way to make real their collective intent, one born out of love as much as principle. The impulse is utopian, even if reality proves less so.

Stay and Fight is smart and self-aware enough to refuse any confident solution toward forging intimacy and independence under our current sociopolitical circumstances. It knows that such a solution does not exist. Rather, there is staying, there is fighting, and there is fighting to stay. There is trying to protect your child from harm, and there is producing unforeseen harm as a result. There is State intervention, normalizing forces that (as always) refuse to let live those who try and turn away from its authority. There are pipelines slicing through the land, there is inadequate healthcare, there is hateful speech and addiction and hunger. Stay and Fight touches upon the most central, tender, and violent conflicts of our time without opting for simplicity, allowing the sadness and humor of family to guide its reader toward a more generative understanding of all the ways there are to stick around for something you believe in.