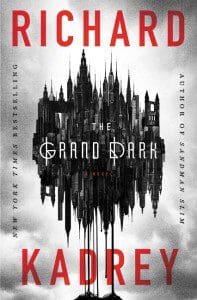 The Grand Dark (423 pages; Harper Voyager), the new book by New York Times-bestselling author Richard Kadrey, best known for his ongoing supernatural noir series Sandman Slim, is an urban fantasy that both satisfies and defies genre conventions. Looking the horror of war dead in the eye, The Grand Dark is also a moody, multi-layered mystery about human conflict, politics, and artistic expression, as well as an ambitious feat of world building.

The Great War has left the fantastical country of High Proszawa in ruins. The survivors live in Lower Proszawa, a coastal city where the wealthy and poor are stratified by cleanliness. “City silver” from coal plants dirties every neighborhood, and affluent areas are constantly scoured clean. Those less fortunate live where the soot accumulates, and are left to suffer the health consequences. Coal dust is a powerful metaphor for characters who live, both literally and figuratively, in the gray.

The novel’s dystopian setting is reminiscent of interwar Germany—a time when political parties went to their extremes. The Grand Dark takes place in a time of propaganda, suppressed speech, and the oppression of the Secret Police, when vice is a last refuge for a populace whose collective unconscious senses doom. Like “the invader” in John Steinbeck’s classic novel of resistance, The Moon Is Down, the enemy in The Grand Dark is never named. Instead, Kadrey uses newspaper articles, book quotes, and diary entries to capture his setting’s cultural zeitgeist, including excerpts like: “Everything was fun and nothing mattered because everyone knew that sooner or later the cannons would boom again and nothing would be fun and everything would matter.” Living at the mercy of a totalitarian war machine, the notion of self is obliterated, yet The Grand Dark still questions if the enemy comes from within.


Traversing this strange world is twenty-one year old bicycle messenger Largo Moorden. During his childhood in the slums, Largo learned the back alleys and shortcuts of Lower Proszawa by outrunning bullies. His familiarity with the city makes him the ideal choice for chief courier after a co-worker is arrested by the Secret Police. More important deliveries bring higher risk but better tips. Largo quickly learns that information is currency, and begins selling stories to a tabloid—aptly named Ihre Skandale (Your Scandals)—for large payouts. However, Largo’s naivety of Lower Proszawa’s sociopolitical situation makes him blind to the danger of trading in secrets. Soon he draws the attention, and ire, of the Secret Police.

Hooked on a drug called morphia, Largo has thought little about the future outside of feeding his addiction and spending time with his girlfriend, Remy. His evenings are often spent watching her perform at The Theater of the Grand Dark, the novel’s narrative centerpiece, which “specialized in Schöner Mord, little productions of violence and depravity performed by life-size puppets controlled by actors backstage in galvanic suits.” On the surface, these productions appear to be first-act sex and violence for the groundlings, but each performance actually serves as a microcosm of the story world. Characters are presented with truths they fear to speak of offstage—the coming war, the day-to-day violence in Lower Proszawa, and the threat of a deadly plague known as “the Drops.” The puppets also reflect one of the novel’s major themes: trans-humanism: What is the appropriate gap between technology and humanity? And what happens when the line blurs?

Automatons called “maras” already complete many jobs in Lower Proszawa—from cleaning to construction to crowd control. The Schöne Maschinen (Beautiful Machines) armaments factory also manufactures “chimeras,” which are “custom-made mutant creatures favored as work animals by the municipal services and pets by the well-heeled of Lower Proszawa.” The chimera display a human-like consciousness but are also capable of great violence, which makes them a sort of mascot for Lower Proszawa’s warfare economy. They are also a powerful allusion to Nazi eugenic experiments. The reader is left to ponder if the chimera are technically alive, or only technological marvels. And if the characters accept that the chimera are less than human, what are the limits to their treatment?

When Largo is presented with an opportunity to apprentice at Schöne Maschinen, he begins to think seriously about a future for himself and Remy. Standing in as a human counterpoint is Largo’s friend Rainer, who is a veteran of the Great War. Rainer is one of many wounded veterans known as “Iron Dandies” who wear leather-and-steel masks to conceal their injuries. These masks hide the individual cost of war, leaving the Iron Dandies largely ignored by the public and relegated to the shadows. Rainer is a man who has suffered much, but is still passionate about understanding the world through science and spiritualism, and he provides Largo with a unique perspective.

The Grand Dark is a thematic buffet. Wealth, addiction, and censorship are only a few of its social and political layers. Foremost among its concerns are mankind’s relationship to technology, the treatment of veterans, and how a society handles its “undesirables.” The Grand Dark is a fast-paced fantasy read filled with contemporary resonance that new readers and loyal fans of Sandman Slim will enjoy.