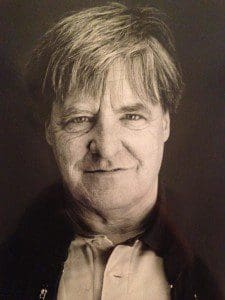 San Francisco is mourning the loss of one of its greatest writers. Kevin Killian was not only a tremendous talent –– as a poet, a novelist, a playwright, an art critic, and more –– but one of the most gregarious and giving souls one could hope to meet. The following is his poem “Who” from ZYZZYVA No. 45 in its entirety:

Who, I didn’t love him enough
ninety thousand names for the government
to gamble on, to conjure, out of a hole
so big it could be only

Who said to me look at my lesions, no,
Kevin, really look, don’t look
at the stars
enough of your avoidance behavior

His body, in state, or tumbled through
a rinse cycle drying in the feathery wind
lint on your net, your intersticed
net, who
I loved so long but not enough


Who, rather than waiting
seized his little liver in a
silver thimble, the man I mistook for a moulting
hen, I, reigning the roost, the big cock of 1983,
I
impenetrable safe of steel, those
tiny fingers made me look like a monkey

Who on the plush row
of velvet embroidery, Joni Mitchell sobbing
in the pew behind me, “I wish I were a river
I could float away on,” a thirst so deep
confession doesn’t cover it

I wanted him to live
to fill his throat with Mella, mella peto
In medio flumine, but who
was it told me
They are moving his body
into the memorable room of a long love

Who was the madman who took him back,
while we watched indignant such a man could go
in the front row with Lisa and Dan
watching David Wojnarowicz scream
his spittle on my chin
at the gay bookstore in San Francisco

made the little tiger the big lamb on Sunday,
broke my will, gave me to the boy
following him down to the grave
holding back, something
ungiven

who launched this rocket into space,
that burst into earth, one death at a time,
its rockets a flare of red and pink pinspots,
livid bouquet in the night sky
over beautiful city
whose garden did I pick this death from?

Zing, zing, a phone insistent
as kismet, the fate that brought me to
a dark reply, hello, is Kevin Killian
home, I’ve got a message, and
who is this, I whisper into the phone,

who did you say was calling
for him, the straight black mouth
of the plastic phone,
I’ll see if he’s in
and who did you say, if you did say

and I don’t think you did say
who, who took me to this
date in my history, who made my
feet scatter like the burnt leaves of
the oak seedlings, while I walk to
the phone as though nothing
were happening,

under the sky, under the rain, in San
Francisco, home of the birds and the
sun and the big bottle of dilaudin and
morphine I gave to him Sunday
and leaving him, quietly, I closed

the door on my nation