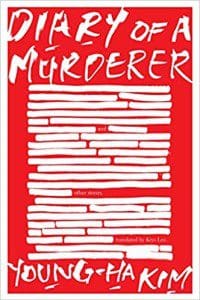 With a title like Diary of a Murderer (200 pages; Mariner; translated by Krys Lee), the latest English release of Young-ha Kim’s work might attract some strange looks while you’re holding it on the subway. But it’s a feeling more adventurous readers will be used to by now, and this story collection boasts precisely the kind of offbeat and darkly rewarding fiction that should appeal to such readers.

An award-winning author in his native Korea, Young-ha Kim has already seen several of his novels translated into English, though Diary of a Murderer is his first story collection to be published in the United States. The book opens with the titular novella, told from the point-of-view of a “retired” serial killer with an unusual predicament: right as he begins to suspect his adopted daughter’s new boyfriend might be a killer himself, he receives a grim Alzheimer’s diagnosis. Suddenly every day becomes a struggle to preserve his memories as he races to collect proof that his unsuspecting daughter’s suitor is not who he claims to be.

The idea of a protagonist attempting to solve a mystery while dealing with short-term memory loss no doubt brings to mind Christopher Nolan’s influential 2000 thriller Memento. (Perhaps unsurprisingly, Young-ha Kim’s story was brought to the silver screen in Korea. 2017’s Memoir of a Murderer proved a box office hit in there, despite the fact that the screenplay deviates from the source material by turning protagonist Byeong-soo into a more likable, Dexter-esque vigilante who only preys on the worst of society.) But Kim’s story makes no such commercial considerations and, as a writer, he seems uninterested in the genre or pulp potential of his premise. Instead, he employs the idea of an unrepentant killer with a rapidly deteriorating mental state as a means to ruminate on the nature of memory, familial responsibility, and evil.


Throughout the story, Byeong-soo resists others’ attempts to psychoanalyze his behavior; he seems to suggest that the mere impetus to investigate evil––to try and study its root or cause––is tantamount to courting self-destruction. The most chilling exchange comes late in the novella when a journalist arrives to interview Byeong-soo about his past crimes:

The rest of the collection features three shorter works that leave behind thriller trappings for more existential and absurd territory, which proves even more satisfying. “The Origin of Life” follows the hapless Seojin, who begins a love affair with a childhood sweetheart named Ina, now trapped in an abusive marriage. Their romance soon leads to terrible consequences for Ina but, fortunately for Seojin, he is able to extract himself from the situation before any harm comes to him; thus, the story serves as both an examination of emotional cowardice as well as the all-encompassing sense of relief one experiences upon narrowly avoiding a disastrous fate:

He was suddenly overjoyed. He was the only one intact, now and in the future. Happiness overwhelmed him. He had resisted temptation, and even felt proud that he had protected himself from a crisis. Fanciful ideas like the origin of life didn’t matter; being alive was what really mattered. Only then did he feel he had truly grown up, as he proudly let go of the sentimental kid who’d read biographies and harbored useless dreams.

Possibly the highlight of the collection, “Missing Child,” chronicles the devastating fallout that occurs when a young married couple’s small child is abducted in a department store and, far stranger, the radical new domestic life that forms when the boy is returned to his parents many years later, after the husband has quit his job and the wife developed schizophrenia. The family unit finds themselves unable to rectify the truth of their biological relation with the unease they now experience in each other’s company––too much time has passed and too much has been lost to ever go back to the way things were. Although the story is told from the third-person perspective, Young-ha Kim briefly enters the father’s consciousness during a crucial moment with his son:

I started considering genes only after we lost you, after I’d crawled on all fours searching for strands of your hair. I believed that it would help us find you. And because of the test results, you’re sitting in front of me right now. But you’re a real stranger to me, just like I must be a stranger to you. If the DNA from the hair I finally found on your baby clothes matches the cells scraped from the inside of your mouth, it means that you’re the same person, and we have to believe it, we must believe it, we’ve got no choice but to believe it, but why can’t we see it with our own eyes?

Diary of a Murderer ends on a meta and comically surreal note: “The Writer” follows a middle-aged novelist faced with writer’s block and a looming deadline, even as his ex-wife may or may not be sleeping with his new editor. Young-ha Kim clearly derives glee here from poking fun at the notion of the writer with a capital “W” as enshrined by popular culture. The narrator of “The Writer” is constantly trying to devise ways to get out of his literary contract, with little consideration given to the integrity of his work or his audience of loyal readers. When he realizes he could be sued for breach of contract if he doesn’t eventually turn in a book, he receives some advice from his friend, a philosophy lecturer:

“Then how about this instead?”
“What?”
“Write an unintelligible, chaotic book that’s unpublishable. Write something like James Joyce’s Ulysses. A difficult book, one around a thousand pages long, without a clear plot line or a recognizable subject.”
Ulysses has a plot and a concrete subject.”
“To be honest, I haven’t read it. What’s it about?”

Unconventional and acerbic, Young-ha Kim’s stories possess a knack for black humor as their protagonists find themselves in increasingly degrading situations. Diary of a Murderer feels like a stellar entry point into the writer’s distorted world, and makes clear why his examinations of contemporary urban life and its many contradictions have earned him comparisons to the likes of Albert Camus and Haruki Murakami.