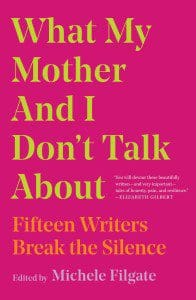 In What My Mother And I Don’t Talk About (288 pages; Simon & Schuster; edited by Michele Filgate), fifteen writers grapple with the unexpected developments and shortcomings of their relationships with their mothers. In her introduction, Filgate explains that while each individual essay is an achievement in itself, together they work to address the ways we tend to idealize our mothers, as well as reflect honestly on the imperfect relationships we forge (and sometimes end) with them over the course of our lives:

Acknowledging what we couldn’t say for so long, for whatever reason, is one way to heal our relationships with others and, perhaps most importantly, with ourselves. But doing this as a community is much easier than standing alone on a stage.

The essays range in both tone and subject matter: some authors have been estranged from their mothers for years, having suffered abuse and neglect throughout their childhoods, while others are only beginning to understand their mothers as they become parents themselves or think deeply about their family dynamics. This collection engages with tough questions about holding accountable the people we’ve been taught to revere, recognizing the impression our mothers’ greatest strengths and flaws have left on us, and the importance of putting oneself first. At the center of that conversation is the difficulty all children face as they try to understand their parent as a person and not simply a mother.


In “16 Minetta Lane,” Dylan Landis tells an episodic story about her mother’s friendship with noted artist Haywood “Bill” Rivers that taps into the curiosity many of us have about our mothers’ lives before they gave birth to us:

Tell me, what did you do with your glittering mind? Did you make the right choice? Marry the right man? Would you have studied at the Sorbonne, Erica? Laughed with writers at Les Deux Magots?
Did you lock up that dazzling wit of yours, or did you write a book?
Did you get to stroll in Paris? Would you care if your daughter were a perfect doll of a brown baby?
Who would you love, Erica?
Who would you be?

Others writers in the collection show us how, as Filgate writes in her introduction, mothers can be set up to fail. In “Xanadu,” Alexander Chee explains how he survived things his mother couldn’t shield him from: the difficulties of growing up queer and Asian, the traumas of sexual abuse, and the death of his father. Chee unpacks the complications of trying to protect one’s protector:

It is the night before my first novel’s publication in the fall of 2001, and my mother is about to travel to New York for my launch at the Asian American Writers’ Workshop. If I don’t make the call, I will read from the novel in front of her, a novel about surviving sexual abuse and pedophilia, inspired by events from my childhood—these autobiographical events, events I have never described for her—and she will find out the next evening in a crowded room full of strangers. And she will never forgive me if I do…Our family had passed through a season of hell, and this was what I’d done to survive it. I know at last: I never told her about this because I was sure I was protecting her.

Careful not to omit moments of love and tenderness, these fifteen writers also reach striking realizations that could potentially alter or destroy their connection with their mothers. What My Mother And I Don’t Talk About captures the complexity of the bond between mother and child, each of the authors conveying their relationships in a way that seems both universally understood and uniquely experienced. Readers are likely to express gratitude to these these writers for diving headfirst into the mental health issues, feelings of loss, and constant learning we all go through, mothers included.