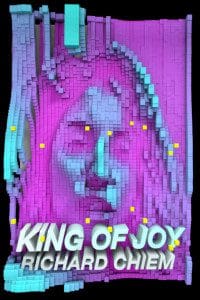 King of Joy (176 pages; Soft Skull Press) floats out from under a narcotic haze. The first novel from Richard Chiem follows the recent reissue of his story collection, You Private Person, and expands on that book’s knack for exploring millennial ennui. As King of Joy opens, lead character Corvus finds herself in a purgatorial place; on the run from a painful past, she’s spent the last year residing in a secluded woodland manor with a host of other young women and their employer, a pornographer named Tim. Her days are loosely spent in a druggy stupor, socializing with her cast-mates and performing for Tim’s camera:

The poise and happiness of her years are gone but she owns a slowness no one could take from her, a rock no one could dare budge, drinking cold milk straight from the carton, more in her head than anywhere else…The lie she tells sometimes is that she’s doing okay, that there is nothing wrong. Most days, there is nothing to say.

Early on, we witness Corvus’ arrival at the mansion on a pitch-black night; she watches a half-naked woman use a torch to light a tree on fire as others dance and pop champagne bottles. It’s a surreal moment, one inherently cinematic; Chiem has appropriately cited Harmony Korine’s 2013 movie Spring Breakers as a primary influence on the novel. Just as in that film, there is an undercurrent of menace throughout King of Joy, creating the sense that violence could erupt at any moment. Both Tim’s intentions and Corvus’ future appear as ambiguous as the past Corvus remains determined to put behind her.


The novel utilizes a cyclical structure as Corvus’ departure from the house in the woods ultimately leads her to a different isolated mansion, this one protected by a moat full of man-hungry hippopotami. The strange events that unfold there trigger Corvus’ memories of her former husband, a successful but tortured playwright, and the modest life they once shared together. It’s here we develop a sense of the tremendous cloud of grief Corvus has been living under for more than a year now—but also an understanding of how that same grief can be channeled into a source of strength:

In story books, in movies, and in pop songs, Corvus has always loved the stubborn characters the most….the loser getting kicked in the teeth and choosing to smile, mouth full of blood, instead.

King of Joy possesses a funereal tone, shifting through events in a nonlinear fashion that suggests a consciousness in Corvus attempting to reckon with the trauma of her past. There’s a dream-like quality to the situations Chiem invents, and animals in the book are often attributed more admirable human qualities than the humans: people let Corvus down but pit bulls, cats, and hippopotami alike display loyalty, adoration, and a fierce protective spirit.

The novel tends to take on the same languid energy as the lives it depicts. In that sense, Chiem was likely wise not to extend the story past two hundred pages. But there is something refreshingly ordinary about the author’s milieu. His characters are disaffected urbanites, not academics or precocious wunderkind. They listen to Elliot Smith, work menial jobs, and look forward to the end of the day when they can self-medicate with drugs and alcohol. King of Joy finds Corvus occupying a bleak fork in the road. Through her struggles, she doesn’t reach any hard-fought truth; she doesn’t emerge from her suffering with a greater appreciation for life, she simply emerges, and in her world, that’s enough.