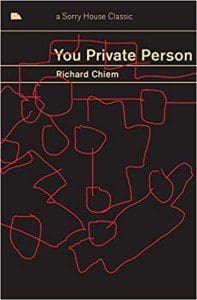 “I smoke a cigarette, imagine flocks of birds in the blue sky, and realize I am always going to be a sad person.” So begins Richard Chiem’s You Private Person (125 pages; Sorry House), a reprinted and revised edition of the Seattle author’s first collection of stories. Often in the form of sparse and slender vignettes, Chiem’s stories offer muted portraits of existential malaise among young urbanites. Originally published in 2012 by Scrambler Books, the stories and their running order have since been updated by Chiem, who has already garnered praise from alternative literature luminaries such as Dennis Cooper and Kate Zambreno.

The stories in You Private Person are, by definition, quiet; they appear to take place in a pocket universe comprised entirely of those still and unremarkable moments that make up most of our waking hours, whether it’s watching the clock tick by at work (“I have twenty-two minutes left until I get to go home, she says. That’s like one Simpson’s episode”), or silently listening to the car radio with your partner (“I like that we wait in the car for songs to end before we get out”). These empty minutes are frequently extended for the duration of entire stories, lulling the reader into a false sense of security as You Private Person interrogates the unfeeling stupor of contemporary existence, so that when something momentous does occur—a man falling to his death from a hotel rooftop, a car colliding with a semi-truck on the freeway—the violence has a shattering effect.


In a series of interconnected stories titled “sociopaths,” the narrator contemplates acting out the murder of the man who sexually abused his girlfriend during her childhood. In the icy, Raymond Carver-esque “what if, wendy,” a man derails what could have been an after-bar hookup with a conversation about his own moral failings. “The thing is, I don’t know how to be good anymore,” he confides. Elsewhere, the arresting “how to survive a car accident” details Chiem’s 2008 automobile crash, a traumatic experience that the reader senses must have been life-altering for the author. Each of these stories capture characters arriving at moments of reflection—instances when they are inspired to pause, drink in hand, and contemplate how they managed to go so astray in life. Chiem doesn’t judge these characters, and instead allows them to draw their own conclusions: taking stock of the mess her personal life has become, the long-suffering wife of an ill-tempered boxer muses, “I think I just wanted everyone to be happy.”

Chiem’s prose matches his steely characters turn for turn. His style is stripped down, minimalist but poetic, with frequent pop culture references (the 2003 suicide of Hong Kong superstar Leslie Cheung looms over one story). Recognizable indie acts like Rilo Kiley and Broken Social Scene play in the background of many scenes. Unsurprisingly considering its original publication date, You Private Person does feels like a document of the mid-Obama years, a time of relative societal calm when the primary concern of these characters’ lives would have indeed likely been the struggle to pay bills and maintain a steady relationship.

Chiem proves adept at examining our obsession with the notion of The Other; many of these stories find their perspective pulling away from their ostensible male narrators in order to consider the interiority of the women they love: “Sometimes she cannot tell whether or not she is being cruel or sarcastic or playful on purpose, especially when she doesn’t have anything clever to say. Inside her head, intentions misfire.” When asked in an interview about his tendency to empathize more with the female characters in his work, Chiem stated, “For me it was about giving particular characters a voice, even though they don’t really say much. It’s about having their lives lived.”

These lives and the quiet tremors they create help form the bedrock of Chiem’s stories; they’re why he’s swiftly becoming one of our great chroniclers of urban melancholy. You Private Person understands that sometimes, when faced with the weight of the decisions we’ve made, both good and bad, and the consequences they’ve wrought in our lives, the only choice we really have is to start the next shift at work.