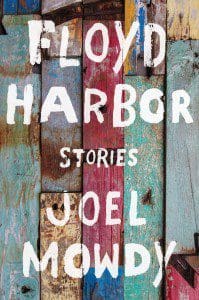 Oh yeah, it’s not really a “harbor,’’ as the narrator of a story titled “Stacked Mattresses’’ explains. “There were all kinds of cars in the diner parking lot. From this vantage point, I also had a view of the infamous WELCOME TO FLOYD HARBOR sign. The story was that back in the mid-eighties, members from the Historic Society and Property Owners Association formed a committee to change the Mastics and Shirley to Floyd Harbor … to attract business and wealthier residents.” The measure got passed, but didn’t go over with everyone—the non-gentrifiers “put bumper stickers on their car that said WHERE’S DA HARBOR?’’

The rest of the story is about Michael, a wheelchair-bound guy who gets talked into a scam by his buddy Grady that involves changing the pricetags on double mattresses, and exchanging them to other outlets for full queen-size refunds. (Don’t ask.) When Grady gets busted, his pregnant girlfriend, Princess, stashes the mattresses at Michael’s place. The plot thickens as she warns him ominously about Grady’s accomplice, Kit-Kat. “I don’t want anything to do with anyone called Kit-Kat,’’ Michael responds, witnessing his world cave in. It’s dark comedy, beautifully rendered, somewhere between Raymond Carver and Richard Price.


In “Far-Off Places,’’ Jeff takes some blotter acid with his buddy Rob down by the 7-Eleven to try to block the memory of his girlfriend Corinne, and why she dumped him. When the drugs kick in, false profundities abound:

As they entered the blinding store like fluttering moths, Rob saw a bigger picture of life as most people live it. Everybody has a light they strive toward. Corinne is Jeff’s light, and having a great time is Rob’s. That man and woman: the beer they carry out of 7-Eleven is their light, and they were drawn to 7-Eleven to get it.

After drunk dialing and breaking Corinne’s window to get in to see her at her parent’s place, Jeff “took a dive, swam across the bay, turned up naked at the gas station on Neighborhood Road and was wrestled into the back of a police cruiser.’’

Mowdy is clear-eyed, but not without compassion, and humor.

“Animal Kingdom’’ recounts a chance meeting between the narrator and a woman named Rose at the wedding reception for a friend who doesn’t know his bride is pregnant by another man. “The next morning I told Rose she looked more like a Betty,’’ he muses. “It was all the tattoos, stamped here and there like cargo tags on a well-traveled suitcase.’’

The course of true love is interrupted, sadly, when a cat falls out of a tree onto Rose’s chest. (Stay with me here.) While the narrator hails a cab to get advice at the pet store, he’s idistracted by a nearby jogger “in red lifeguard shorts’’ who was “being a wonderful neighbor to Rose by washing some of the fleas off the cat in a disposable baking pan of warm water and dish soap suds. Rose stood by with a towel. They were drinking cold beers the man had brought over. What else they did, I don’t know.’’

According to Mowdy’s biography, he grew up in Mastic Beach with twelve siblings and now splits his time between homesteading in the forest of Lithuania with his wife and son and teaching in Bali.

It’s a long way from Long Island, but clearly, he hasn’t forgotten his roots. Neither will you, after reading this indelible account.