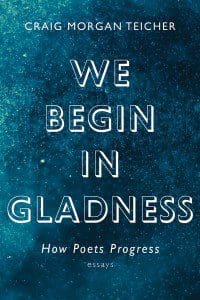 We rarely have the opportunity to observe a poet’s writing process, even though we may occasionally see earlier drafts that serve as evidence of it. But Craig Morgan Teicher gives us the next best thing: his new book examines poets’ creative processes over the courses of their careers.

Part guidebook for emerging poets and part homage to a wide range of major poets, Teicher’s We Begin in Gladness: How Poets Progress (164 pages; Graywolf) is one of the most enjoyable books about poetry I have encountered. His obvious love of poetry infuses the book with the “grace, certainty, power, and humility” he so admires in one of his literary heroines, Lucille Clifton. Additionally, because he surveys a diverse group of writers, providing relevant biographical background and anecdotes from their lives and his own, We Begin in Gladness is a book with wide appeal.

Given its focus on showing how poets progress, it’s unsurprising that the majority of poets featured in Teicher’s book are well known. However, he makes a significant distinction between these poets. On one hand, there are those rare writers who are considered major poets because they produced “very different poems over the course of their lives”—a skill, he notes, which is now a requirement for most modern poets. On the other hand, most major poets refined both their subjects—essentially writing the same poem across many years before finally getting it as right as possible—and their styles to the point where each of them inhabited a singular voice. And while Teicher does not completely disavow the popular notion, espoused by Paul Muldoon, that “Poets disimprove as they go on. It’s just a fact of life,” he is intent on examining the leaps, breakthroughs, and “steady progress” in the quality of work produced by major poets. To do so, he presents and scrutinizes excerpts from poems by Sylvia Plath, Brenda Hillman, John Ashbery, Lucille Clifton, D.A. Powell, W.S. Merwin, William Butler Yeats, Robert Hayden, Robert Lowell, Louise Glück, and others.


Teicher also offers a few examples of deterioration in the quality of some major poets’ works. For example, he introduces us to the relatively unknown Delmore Schwartz, a writer he characterizes as “the twentieth century’s most thwarted poet.” As with Teicher’s assessments of the weaknesses of other poets—Plath, Lowell, Ashbery, and Merwin—his brief overview of Schwartz’s work is as much a celebration of that writer’s triumphs as it is a cautionary tale. However, as Teicher shows in his analysis of how Susan Wheeler picked up where Ashbery’s “Self-Portrait in a Convex Mirror” left off, the great works of poets who plateau or “disimprove” may live on in new work that seems almost collaborative, albeit across gulfs of time and death. Indeed, Teicher asserts, “Sometimes, it’s only in the work of the newer poet that we can identify the achievements of the older ones.” Reading this book, I found myself experiencing Teicher’s epiphany, as it was only in reading his analysis of Yeats’ work that I noticed the influence of that poet on one of my literary heroes, Derek Walcott.

It is interesting to review a book that is in conversation with many other books and that reviews works by other writers. In that sense, Teicher’s work offers lessons for art critics, too. While I think it’s safe to say he admires much of the work of every poet in We Begin in Gladness, Teicher’s praise for their best poetry is tempered by his honest appraisals of their weaker efforts. So while Teicher celebrates the “stripped-down simplicity” and “soft-landing (epiphanic) leap” that characterizes Merwin’s best work, he finds much of the esteemed writer’s other poetry to be full of “self-importance.” The story of how Stanley Kunitz once told Louise Glück that a group of poems she had written and shared with him was “terrible”—an assessment that became a springboard for Glück’s dramatic improvement—is both a subtle commentary on critique and an encouraging anecdote for any poet who questions the quality of their own work.

We Begin in Gladness‘ secondary theme seems to be how nearly every poet grapples with the inadequacy of language. Nonetheless, Teicher notes, writers turn to poetry precisely for this reason. Poetry is, according to him, the best tool we have to convey that which is “genuine.” “When we hear and understand what can’t be said and heard,” he writes, “that’s when a ‘pure change’ happens,” And yet, “the unsayable is never quite said.”

Teicher shows us how the work of major poets, including Hayden and Yeats, has essentially been a struggle to say what they mean, getting closer and closer to this goal but eventually making peace with the impossibility of such an endeavor. In Yeats’ case, this finally led him to an understanding of what he loved in poetry, which, it turns out, was not that which he sought to capture—not reality—but the imagined worlds his quest produced or the poetry itself. This sentiment is echoed by Lowell, who wrote, “I want to make/something imagined, not recalled?” Teicher’s book is full of insights like these, and it’s a pleasure to see how the poets he features in it are in conversation with one another across time (generations, even) and space.

Though not necessarily a craft book, We Begin in Gladness does what all good craft books aim, but so often fail, to do—it makes the reader want to go and investigate the many works of poetry the author references and to learn more about their makers, much as (as Teicher asserts) “a real poem points to everything beyond it.”